A newly released video shows the moment a robbery suspect fell through a Brazilian gas station floor grille while lifting a safe.

The footage of the February theft was revealed Thursday after the civil police in the Federal District arrested the fourth and last suspect of the gang responsible for the string of heists.

In the surveillance video, three suspects can be seen trying to place the safe into the trunk of a vehicle inside the gas station located in the Federal District town of Recanto das Emas. 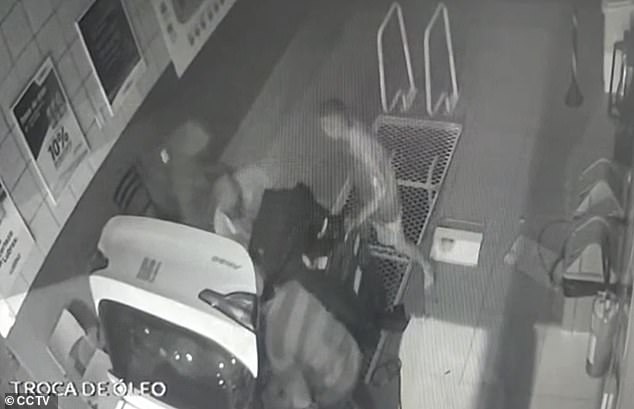 A robbery gang load a safe into the back of a stolen vehicle moments before they lost control of it, causing one of the suspects to fall through a floor grille inside a gas station in Federal District, Brazil. The fourth and last member of the gang that pulled off the robbery in February was finally arrested on Thursday 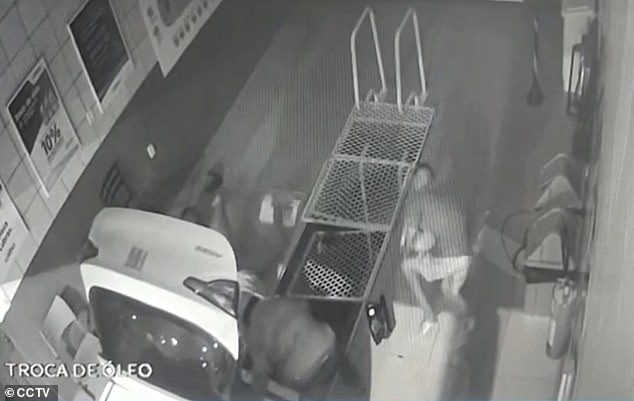 One of the four suspects crashes through a floor grille at a gas station during a robbery that took place in February in Federal District, Brazil. Video of the footage was release Thursday following the arrest of the fourth and final suspect. Another member of the group was taken into custody on Wednesday. The other two were arrested in April

The four men then pick up the safe off the ground, but the weight of the metal bin caused three of the suspects to slip and fall.

One of them apparently suffered the most when he crashes through the floor grille and falls face first into an area set below the ground where the mechanics position themselves to inspect the undercarriage.

The Federal District police arrested two of the suspects in April and a third on Wednesday, according to Brazilian news outlet G1.

The fourth robbery gang suspect was taken into custody when he was busted for drug trafficking. 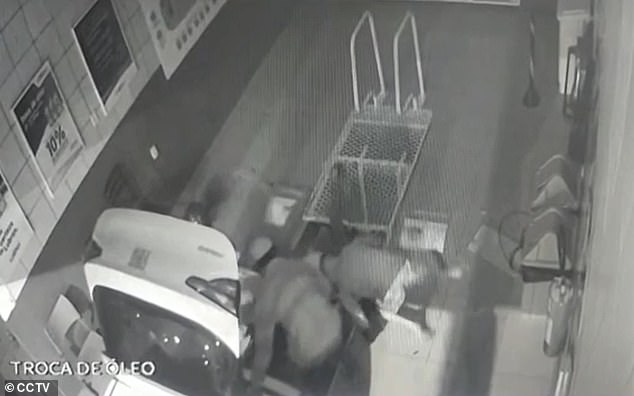 The group was known for terrorizing gas stations throughout the Federal District dating back to December 2021 when they robbed a service station in the town of Gama.

They also robbed a gas station in the town of Samambaia in January and another one Ceilândia in March.

Authorities said the group would brandish their firearms in the robberies and tie up the workers. All of the vehicles used in the thefts were stolen and had clone licensed plates. At least one driver was shot during one of the robberies.