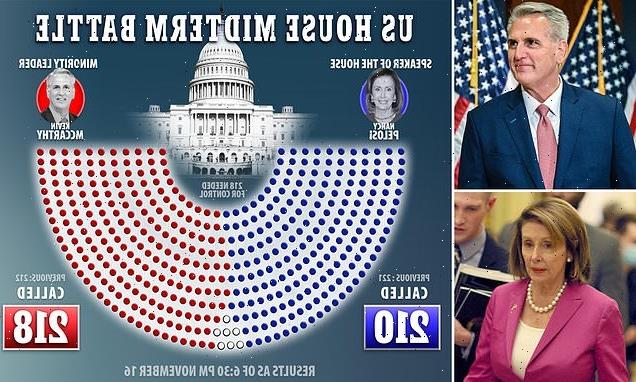 ‘I congratulate leader McCarthy’: Biden says he is ‘ready to work’ with new House leader – who replaces Nancy Pelosi – as GOP finally reaches 218 seats to take majority over the Democrats

The Republican Party has officially taken the majority in the House of Representatives – but by a far narrower margin that Republicans were gunning for going into the elections.

The GOP secured the 218 seats needed to flip control from the Democrats on Wednesday evening with a win in California’s 27th Congressional district, eight days after midterm elections night.

The result came eight days after Election Day – after it emerged that Republicans were going to fall far short of their hopes and expectations of a ‘red wave’ election that would repudiate the Democrats and empower their own agenda.

President Joe Biden, who just concluded a summit with world leaders in Bali, congratulated the Republicans on their victory and said he was ready to work with leader Kevin McCarthy, who is in line to become the next House Speaker.

‘In this election, voters spoke clearly about their concerns: the need to lower costs, protect the right to choose, and preserve our democracy, Biden said.

‘As I said last week, the future is too promising to be trapped in political warfare. The American people want us to get things done for them.

‘They want us to focus on the issues that matter to them and on making their lives better. And I will work with anyone – Republican or Democrat – willing to work with me to deliver results for them.’

The Republican victory means Biden’s agenda will face roadblocks in the final two years of his first term and will give Republicans investigative powers when they take control of committees. 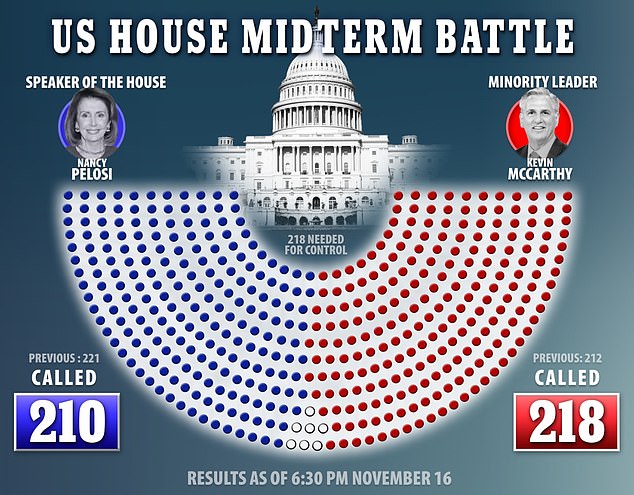 The Republican Party has officially taken the majority in the House of Representatives . The GOP secured the 218 seats needed to flip control from the Democrats on Wednesday evening, eight days after midterm elections night 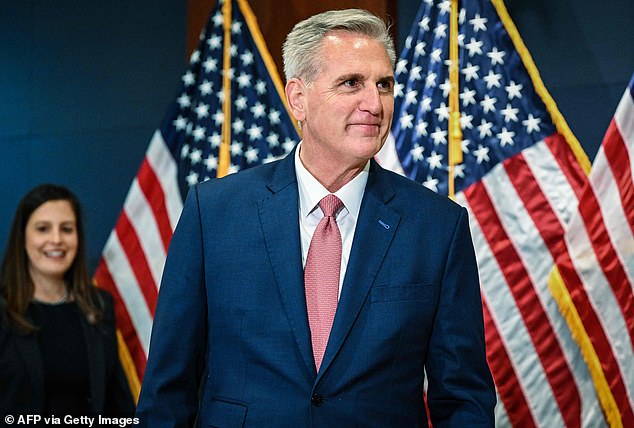 President Joe Biden congratulated the Republicans on their victory and said he was ready to work with leader Kevin McCarthy, who is in line to become the next House Speaker

‘Democrats’ one-party is over,’ a jubilant McCarthy wrote on Twitter in a message saying the party is ready to ‘work for the American people’ and fulfill their party platform, Commitment to America.

McCarthy secured the nomination of House Republicans to be their next Speaker – but he must stand for a vote on the House floor before he can finally secure the post.

That gives a sliver of far right lawmakers leverage to extract concessions – and many have been demanding changes to conference rules that would diminish the speaker’s role and strengthen the hand of party factions.

McCarthy on Tuesday prevailed amid a leadership challenge by Rep. Andy Biggs (R-Ariz.), 188-to-31. He will need to work to secure support of 218 members by January when a new House will reconvene.

That came after he individually courted Rep. Marjorie Taylor Greene (R-Ga.), who has been a lightning rod and MAGA-backed top fundraiser, and who now hold more sway in the conference.

Rep. James Comer, who is set to take over as Chairman of the House Oversight Committee, has warned there will be probes into Biden’s family, the border and COVID.

‘The American people want us to get things done for them’: Biden’s statement on GOP winning the House

There was a strong rejection of election deniers, political violence, and intimidation.

There was an emphatic statement that, in America, the will of the people prevails.

I congratulate Leader McCarthy on Republicans winning the House majority, and am ready to work with House Republicans to deliver results for working families.

In this election, voters spoke clearly about their concerns: the need to lower costs, protect the right to choose, and preserve our democracy.

As I said last week, the future is too promising to be trapped in political warfare.

The American people want us to get things done for them. They want us to focus on the issues that matter to them and on making their lives better.

And I will work with anyone – Republican or Democrat – willing to work with me to deliver results for them.

Hunter Biden and his foreign business deals could be one of the prime targets when the GOP takes the gavel in January.

That isn’t all Republicans have teed up – even as McConnell and others have warned some leaders have alienated independents and centrists.

Top Republicans have also promised probes of the chaotic withdrawal from Afghanistan.

The Justice Department is set to come in for particular scrutiny – at a time when prosecutors are investigating former President Trump for taking government documents to Mar-a-Lago and for his election overturn effort.

McCarthy has previously said he will disband the House January 6th Committee – which held a series of explosive hearings in the run-op to the elections, and has yet to release its final report.

There are still seven races undecided, many in California, leaving the extend of the GOP majority unknown.

The House under its rules is a highly majoritarian institution, meaning Republicans can set their own investigations, determine what comes to the floor, and hold votes when they want – even with the narrowest of majorities.

But any time a narrow faction balks, Democrats can try to seize the initiative and disrupt leadership’s plans, setting up a volatile period.

Even when House Republicans are able to hold their majority and pass legislation, it will run smack into the Democratic-run Senate, where most of their proposals are certain to die.

And Biden continues to wield his veto pen, which he was preparing to brandish if Republicans had taken the House and Senate.

It is a slimmer majority than the Republicans would have liked after the red wave that was predicted failed to materialize.

Current Republican House Leader Rep. Kevin McCarthy is the party’s pick to take over from Nancy Pelosi as speaker, but will still need to win a vote in the full chamber.

The Democrats kept control of the Senate after Senator Catherine Cortez Masto won re-election in her Nevada seat, meaning the government faces two years of gridlock.

While the Democrats’ loss takes away some of Biden’s power in Washington, he has signaled he expects Republicans to cooperate.

In a news conference last week, he said, ‘The American people have made clear, I think, that they expect Republicans to be prepared to work with me as well.’

Conservatives are threatening to hold back on a needed debt-limit increase next year unless significant spending reductions are achieved. 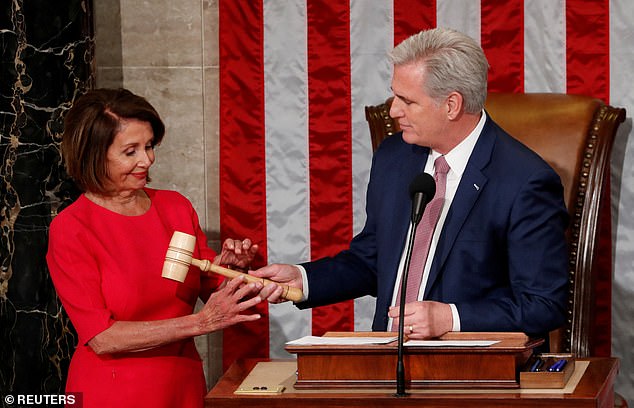 Trading gavels: Pelosi took the gavel from McCarthy in 2019 after being elected speaker of the 116th Congress – a post she had held previously. Now it will go back to McCarthy – if he can secure sufficient support from within his caucus 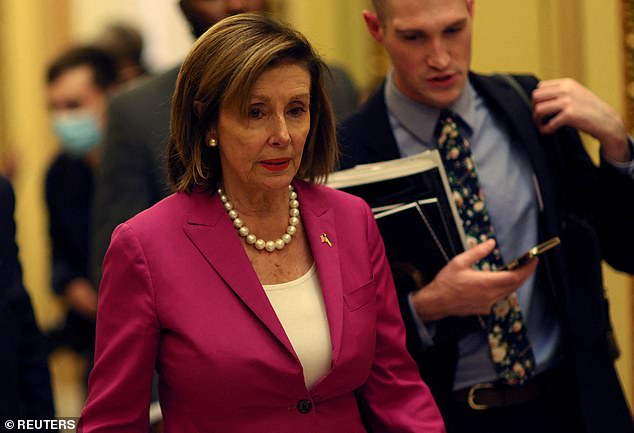 House Speaker Nancy Pelosi will lose the title as she is now in the minority. There will now be questions over her future and whether she will step down from leadership. 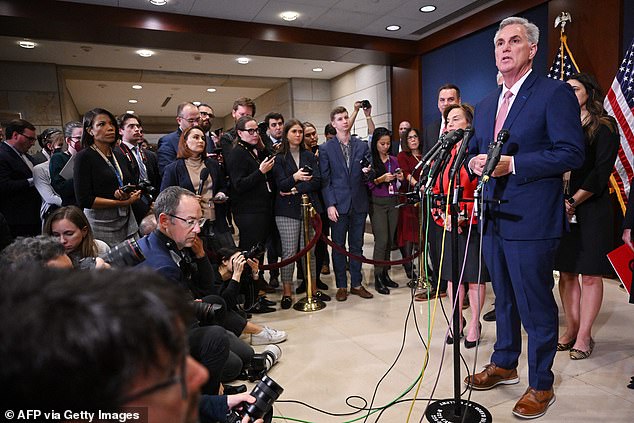 McCarthy was nominated this week to be speaker. But he still must secure 218 votes on the House floor – giving the conservative freedom caucus leverage over him 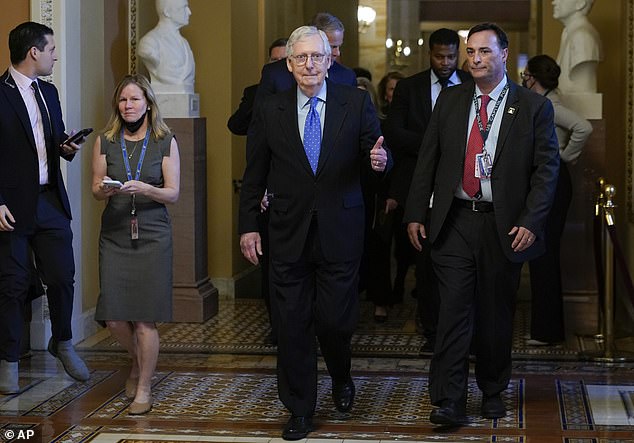 Mitch McConnell fended off a challenge from Florida Sen. Rick Scott to hold on to his position as GOP leader on Wednesday. He is pictured at the Capitol on Wednesday

If he secures sufficient support, McCarthy will take the gavel from House Speaker Nancy Pelosi, who has run her own conference with a firm hand despite a narrow 220 vote majority of her own.

There will now be questions over Pelosi’s future and whether she will step down from leadership.

She has said the attack on Paul Pelosi in her San Francisco home that left him with a fractured skull will factor into her decision on the future.

Pelosi, 82, is the first woman to serve as speaker, and has led her party in both the majority and minority.

Her two lieutenants, Majority Leader Steny Hoyer of Maryland and Majority Whip James C. Clyburn, have served in the House for decades, while younger members have been preparing to face off in the event of a vacancy.

The House GOP seized its majority during a week when deep divisions within the party’s ranks have come to the fore.

Former President Donald Trump, who has railed against ‘RINOs’ helped hand-pick some of the candidates who went down to defeat in battleground states, announced Tuesday night at Mar-a-Lago that he would run for president.

That came at a time when some Republicans are blaming Trump for their failure to capture the Senate, and for their narrow House majority.

Senate Majority Leader Mitch McConnell extended his run as party leader in a closed conference meeting inside the Senate Wednesday – but had to turn back a bitter challenge from Sen. Rick Scott (R-Fla.).

Scott pushed for new leadership, while some party members also blame Scott, who chairs the the National Republican Senatorial Committee, for helping doom the party’s chances.

Biden repeatedly campaigned against an agenda that Scott put out on his own, saying it amounted to a plan to require Social Security and Medicare to come up for a renewal every five years and be put at risk.

‘I’m not going anywhere,’ McConnell told reporters when asked if he would step aside after he surpasses late Sen. Mike Mansfield, D-Mont., for longest-serving party leader in history in 2023.

‘I do think there was a lot of expression in room that the Republican conference and Republican leadership needs to be more vigorous and more effective at fighting policies that are hurting the American people,’ Cruz told reporters after the vote. The Texas Republican had lashed out at GOP leadership shortly after Republicans lost the Senate, 50-49 with one race outstanding in the Georgia runoff.

McConnell prevailed 37-10, after after a year where Trump continued to heap occasional criticism on him, while also attacking his wife, former Secretary Elaine Chao.

‘We had a good opportunity to discuss the differences, people had an opportunity to listen to both candidates, and I’m pretty proud of 37 to 10,’ said McConnell.

Pelosi was upbeat in a statement Wednesday evening, even as she prepared to relinquish her gavel.

‘This year, House Democrats defied expectations with an excellent performance: running their races with courage, optimism and determination. In the next Congress, House Democrats will continue to play a leading role in supporting President Biden’s agenda — with strong leverage over a scant Republican majority,’ she said.

‘House Democrats are thrilled to have so many terrific new and returning Members to the House, who will reinvigorate our Caucus with their energy, diversity and patriotism. We salute our departing Members for their magnificent leadership, achieving landmark progress on health care, climate action, infrastructure, gun violence, veterans and more that can never be diminished.’

‘At least three critical states are still counting ballots. We are endlessly grateful to those who continue their patriotic work to ensure each vote is counted as cast,’ she added.