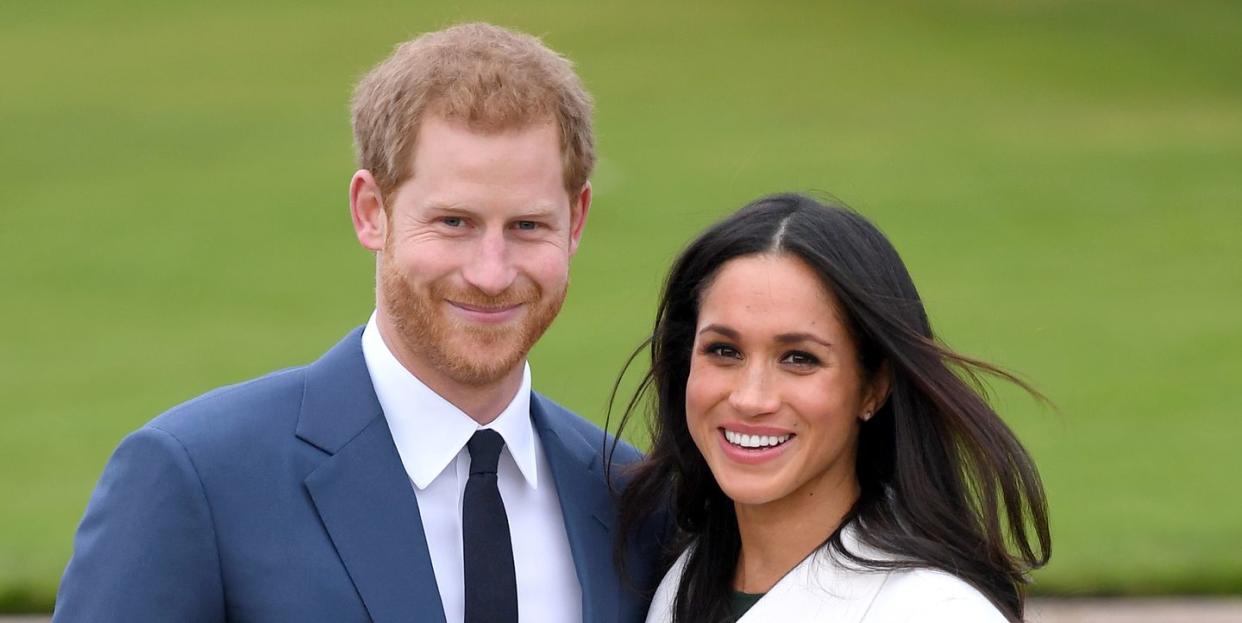 The trailer for Prince Harry and Meghan Markle’s long-awaited Netflix docuseries finally dropped on Thursday, and if you haven’t seen it yet… watch it now! I can wait.

These two have definitely lived their life together in the spotlight—from the worldwide watch party that ensued when they walked down the aisle in 2018, to their split from the royal family (and subsequent Oprah interview)—so this BTS footage is going to be a real treat.

Now that everyone is up to speed on this extremely glamorous-looking docuseries and its romantic array of black and white photos, it's time to delve into all your Harry-and-Meghan-related questions. The doc doesn't have an official air date yet, but that doesn't mean you can't brush up on your royal family knowledge while you wait.

“When the stakes are this high, doesn’t it make more sense to hear our story from us?” Meghan asks in the last frame of the trailer. And the answer is definitely: YES!

In preparation for what is sure to be a juicy doc, here is a timeline of Harry and Meghan’s full romance.

Prince Harry and Meghan, who was best known for her role on Suits at the time, are set up on a blind date in July of 2016. (Meghan later claims she never looked Harry up online before arriving, a detail that seems almost impossible in this day and age.)

In case you don't remember Meghan's Suits days, here's what that looked like: 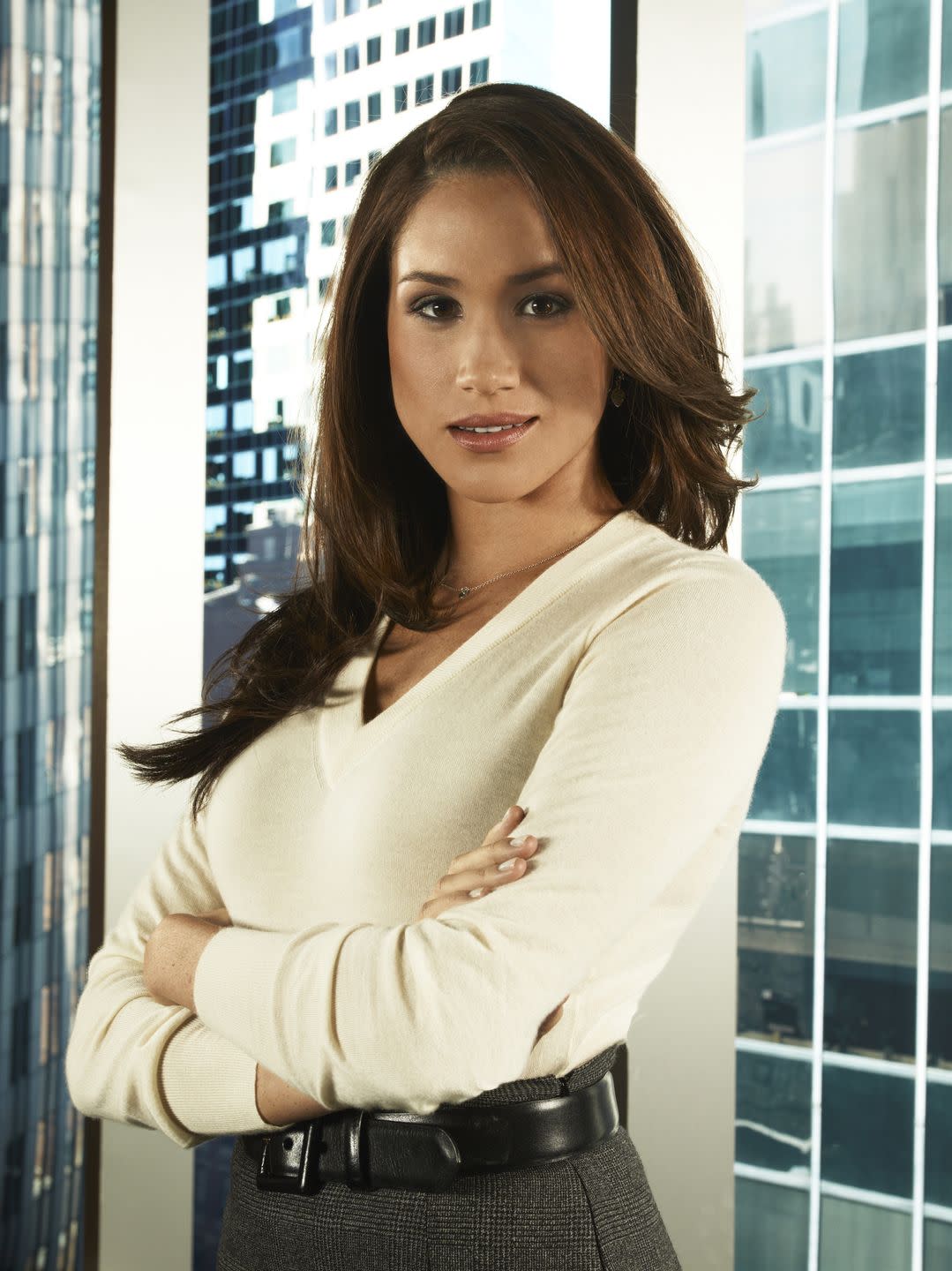 The pair meet at London’s SoHo House and it's apparently a really big hit. Vanity Fair says that the next day, Meghan asked her friend: “Do I sound crazy when I say this could have legs?”

If you’re wondering which friend these two could possibly have in common, there was a lot of speculation, but eventually the answer was revealed. Harry's childhood friend Violet von Westenholz, is to thank for this royal couple, according to E! News. Her dad is a baron and close friends with King Charles.

Apparently the date go well. And a media frenzy around Harry and Meghan quickly reaches a fever pitch, forcing Kensington Palace tothe relationship in a statement.

Harry also says that the media crossed a line, and defends his new girlfriend: “Meghan Markle, has been subject to a wave of abuse and harassment. Some of this has been very public – the smear on the front page of a national newspaper; the racial undertones of comment pieces; and the outright sexism and racism of social media trolls and web article comments.”

The statement continued, “Prince Harry is worried about Ms. Markle’s safety and is deeply disappointed that he has not been able to protect her. It is not right that a few months into a relationship with him that Ms. Markle should be subjected to such a storm. He knows commentators will say this is ‘the price she has to pay’ and that ‘this is all part of the game’. He strongly disagrees. This is not a game – it is her life and his.”

March 2017: They are spotted together at their first public event.

Harry and Meghan make their public debut when she visits Ascot, England, to cheer on her boyfriend during a charity polo match. Later, Meghan accompanies Harry as his date to Pippa Middleton's wedding, per Us Magazine. Ah, there's love in the air.

Shortly after Meghan finishes filming Suits and moves to London, the pair announces their engagement. Palace officials say the prince proposed in early November and that the wedding is planned for the following spring.

Like her sister-in-law, Kate Middleton, Meghan gets a ring that has some sentimental value tied to Harry's mom, Princess Diana. The engagement ring features diamonds from one of Diana’s brooches, per .

The new Duke and Duchess of Sussex officially tie the knot with an elaborate ceremony at St. George’s Chapel in Windsor Castle on May 19, 2018, according to the Royals' website. The wedding is live-streamed and 29 million people tune in from all over the world to watch as England gains a new member of the royal family, per Forbes.

The wedding guest list includes the likes of Oprah, Victoria and David Beckham, and about 600 others; thousands of people also packed the streets to watch as Meghan and Harry said "I do" and left the chapel. 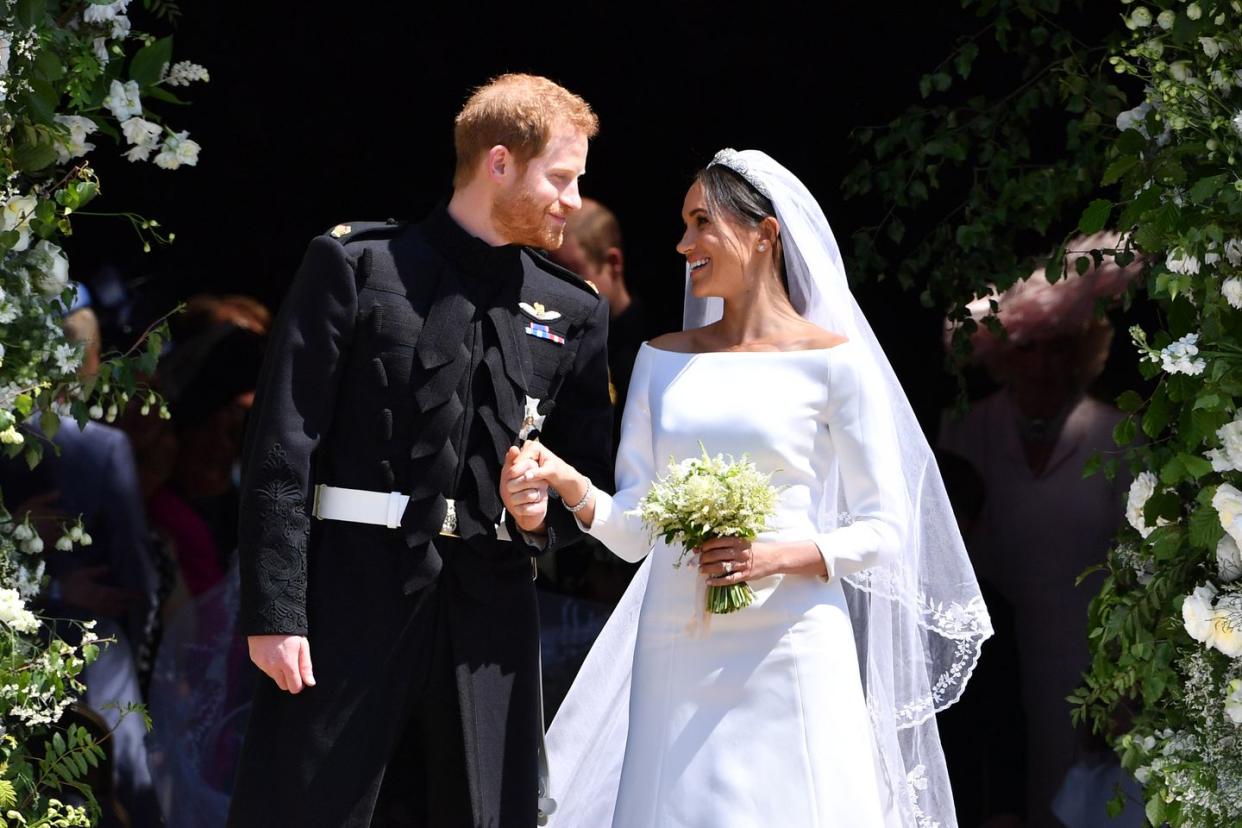 This will be the couple's first baby together, and the couple announces their happy news in a statement on Instagram: "Their Royal Highnesses The Duke and Duchess of Sussex are very pleased to announce that The Duchess of Sussex is expecting a baby in the Spring of 2019," it said.

"Their Royal Highnesses have appreciated all of the support they have received from people around the world since their wedding in May and are delighted to be able to share this happy news with the public."

A post shared by The Prince and Princess of Wales (@princeandprincessofwales)

Archie Harrison Mountbatten-Windsor is born on May 6, 2019, in London, just shy of the couple's first wedding anniversary.

In a statement, the couple's joint Instagram account writes, “Their Royal Highnesses’ son weighs 7lbs. 3oz. The duchess and baby are both healthy and well, and the couple thank members of the public for their shared excitement and support during this very special time in their lives."

Jan 2020: The couple decides to “step back” from their royal duties.

In a truly shocking turn, Meghan and Harry announce via Instagram that they are stepping back as senior members of the Royal Family.

“After many months of reflection and internal discussions, we have chosen to make a transition this year in starting to carve out a progressive new role within this institution,” they said in the Instagram statement.

“It is with your encouragement, particularly over the last few years, that we feel prepared to make this adjustment. We now plan to balance our time between the United Kingdom and North America, continuing to honour our duty to The Queen, the Commonwealth, and our patronages."

The post then goes on to say that they will "raise our son with an appreciation for the royal tradition" but that they will also have "space to focus on the next chapter."

The couple (and Archie!) find a new home in the celebrity haven that is Montecito, California. There, they start raising chickens and seem pretty happy. In their show-stopping interview with Oprah, Meghan explains the bliss of their new life. “This kind of stuff is so basic, but it’s really fulfilling and about getting back to basics," she says, per Bustle.

In an , she penned for The New York Times, Meghan shares that she suffered a miscarriage.

“After changing his diaper, I felt a sharp cramp. I dropped to the floor with him in my arms, humming a lullaby to keep us both calm, the cheerful tune a stark contrast to my sense that something was not right,” she wrote. “I knew, as I clutched my firstborn child, that I was losing my second.”

After the heartbreaking loss, Meghan and Harry announce, with yet another stunning photoshoot, that she is pregnant. On Valentine’s Day, the couple’s spokesperson said, “We can confirm that Archie is going to be a big brother," per Us Weekly. Awww!

On June 4, Lilibet Diana Mountbatten-Windsor is born, joining her older brother Archie and rounding out this royal family's quartet. She is named for great-grandmother Queen Elizabeth (Lilibet was a pet nickname) and Harry’s mother, Princess Diana.

According to the BBC, the late Queen's nickname was "coined when then-Princess Elizabeth was just a toddler and couldn't pronounce her name properly."

Lilibet weighed 7lb 11oz at birth, and was born at Santa Barbara Cottage hospital, per The Guardian. She goes by "Lili."

It was such a privilege to celebrate the 1st birthday of Lilibet with my family and hers! Joy and face painting all around ❤️🎂🎉 pic.twitter.com/bg3RY6MOEu

Dec 2022: The trailer for their doc finally drops.

The long-awaited trailer for the couple’s documentary, Harry & Meghan, finally drops, and promises an exclusive look into the last few years in the couple’s life. In case you missed it, here's the clip:

Stay tuned for more details about the Sussexes and their new doc, coming soon!