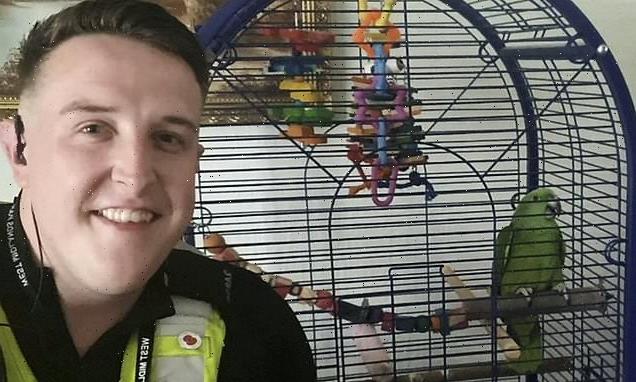 Squawking to the cops! Police left red-faced after smashing into house over reports of elderly woman was in distress… only to find her pet PARROT calling ‘help’

Police smashed their way into a house after reports that an elderly woman was crying out in distress – but instead found a PARROT squawking: ‘Help!’

A team of officers bolted to the home in Sutton Coldfield in the West Midlands and booted down the door to assist the distressed resident.

When they entered the house at 7.30pm on Wednesday, June 15, bewildered police officers found the property empty with no signs of anyone in need of help. 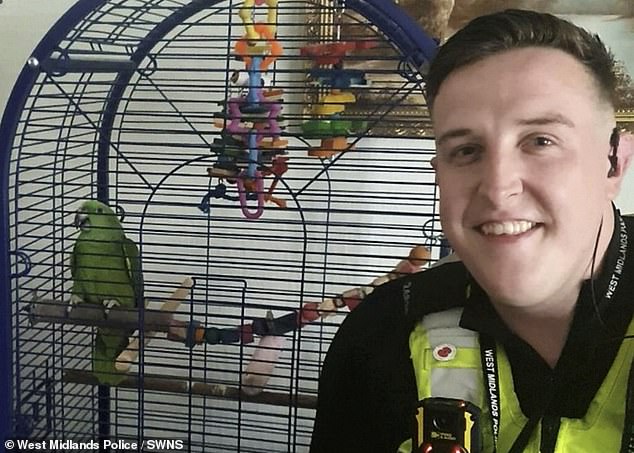 After reports of a voice crying ‘help!’ from inside a West Midlands home on Wednesday, June 15, police booted the door down but all they found was a chatty parrot. West Midlands Police’s PC Jukes pictured with the parrot who should be ‘put before the Beak’ for ‘wasting police time’

After a search of the property officers were left red-faced after all they found was the green bird happily sitting in its cage in the corner of the living room.

The homeowner’s son returned home shortly after the police arrived and explained it was not his mum calling out for help but her feathered friend.

How do parrots mimic words and why do they do it? 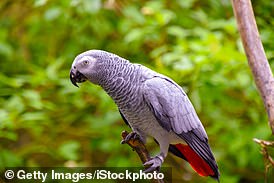 West Midlands Force Response shared details of the hilarious mishap on Twitter along with a picture (above) of officer PC Jukes, who dealt with the incident, with the cheeky green bird.

They wrote: ‘C Team Sutton respond to a report of an elderly female shouting for help inside her address.

‘Entry forced and searched however no sign of the female.

‘Son arrives and informs PC Jukes that the parrot in the living room talks and was the one shouting Help!’

Yesterday morning the team added: ‘Sutton are ready for another day of answering emergency calls!

‘Hopefully we don’t have any more calls relating to naughty parrots! #PollySendingPoliceCrackers #ParrotGate.’

One web user Piers Doughty-Brown commented: ‘Charge him with wasting police time and put him before the Beak?’

‘The Beak’ is an old slang term for a magistrate.

Kaz said: ‘Brilliant but it just proves that you are always there to respond to someone in need even though it was a parrot this time.’

PCMatty added: ‘Reminds me of one of the Carry On films!’ while Andrew wrote: ‘Who’s a clever boy then?’

DJ Markymarc was more concerned and asked: ‘Where did the parrot learn to cry ‘help’ in a ladies voice? Is there any more checking to be done here?

Another called Alex put: ‘But why has the parrot learned that phrase?’

A West Midlands Police spokesman would not provide any further details of the incident.

He said: ‘All we are confirming is that we were called to address in Wylde Green at 7.30pm on Wednesday.’