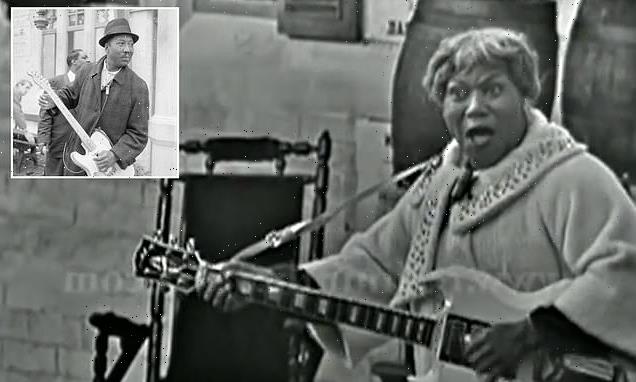 Performance of Sister Rosetta Tharpe at Manchester station in 1964

One way to beat the commuter Blues! As Britain battles rail strikes and downpours, how US gospel singer Sister Rosetta Tharpe and music icon Muddy Waters performed in pouring rain to delight audience on station platform in Manchester in 1964

The misery is being made worse by torrential rain causing flooding at stations including London Victoria yesterday, with more flood warnings in place today.

But commuters might have had a little lift if they could have enjoyed a rapturous rhythm and blues gig like the one that was put on at a disused Manchester station in 1964.

On May 7 that year, gospel musician Sister Rosetta Tharpe – dubbed the ‘Godmother of rock and roll’ – performed at the former Wilbraham Road Station, which had closed six years earlier.

A video that recently resurfaced on social media shows the star performing her hit ‘Didn’t Let It Rain’ during the gig, as stormy weather lashed her and the audience of locals. 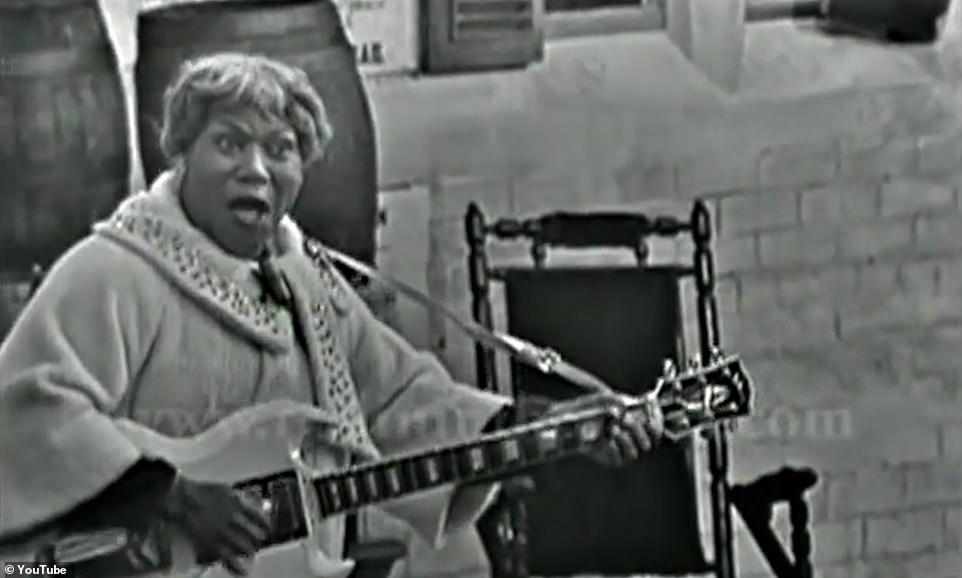 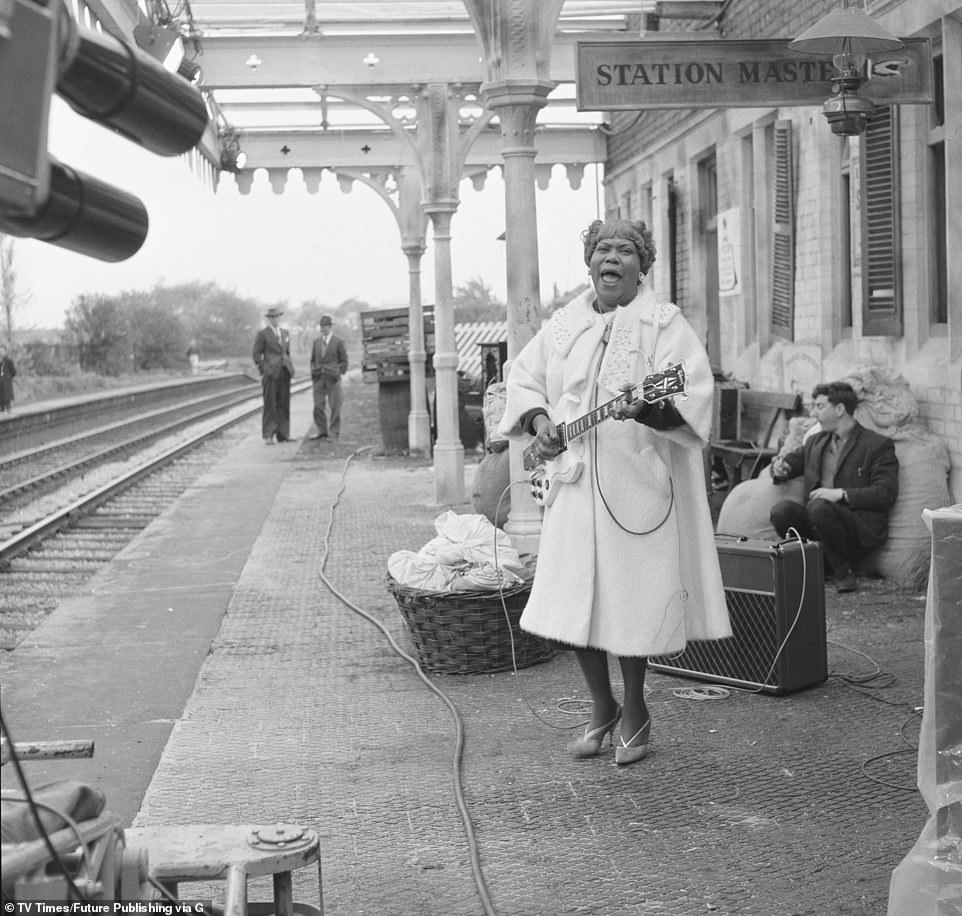 Sister Rosetta, from Sandy Grove, Arkansas, performed in Manchester during a tour of Britain that saw her earn £500 a week – the equivalent of more than £7,000 in today’s money 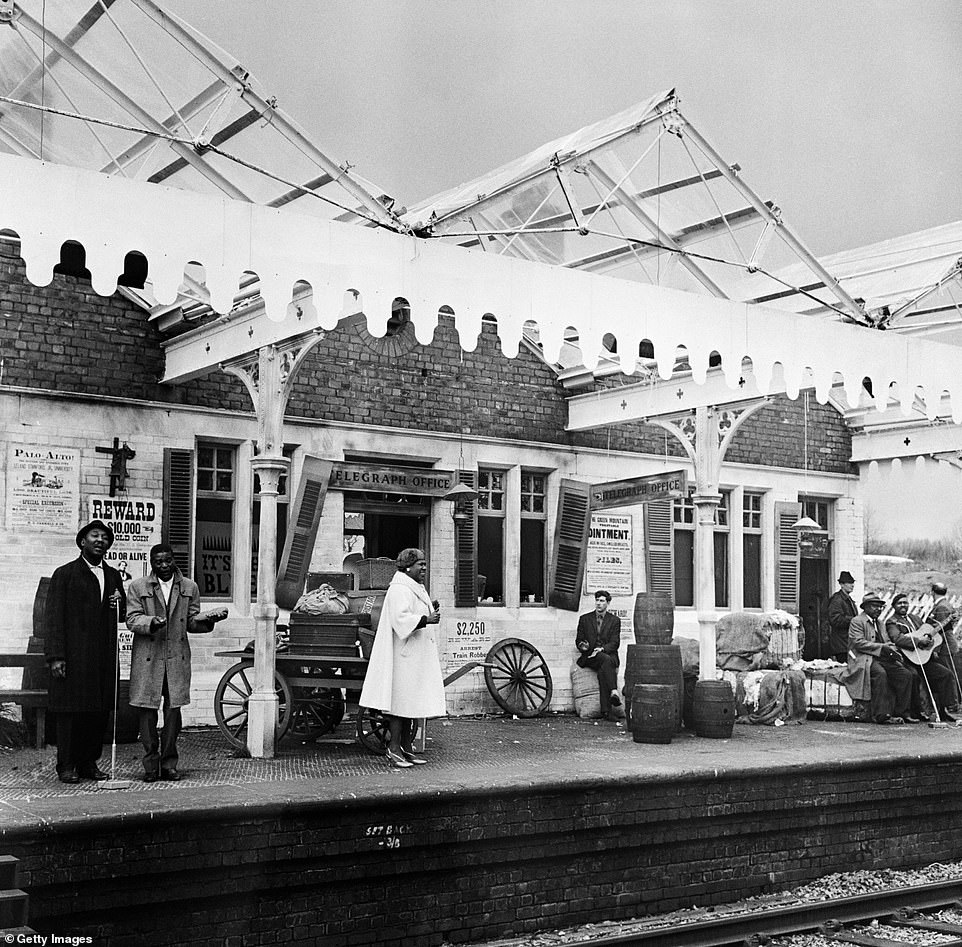 The gig, named the Blues and Gospel Train, was broadcast on Granada TV and is now regarded as being hugely influential for the development of music in Britain. As well as Sister Rosetta, the line-up included blues legends Muddy Waters (far left) and Sonny Terry 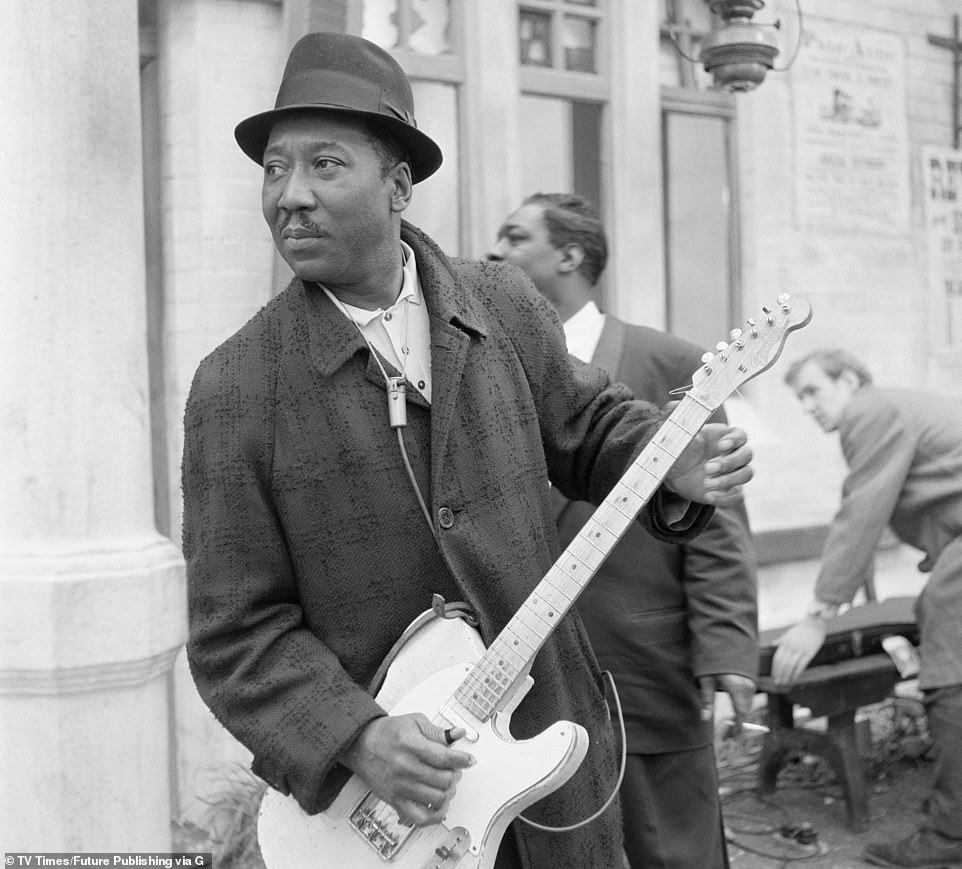 Muddy Waters is often cited as the ‘father of modern Chicago Blues’. He is pictured above during filming for the gig at Wilbraham Road

The station, which closed in 1958,  had been temporarily re-named ‘Chorltonville’ and made to look like America’s Deep South. The audience had arrived by train from central Manchester.

The gig, named the Blues and Gospel Train, was broadcast on Granada TV and is now regarded as being hugely influential for the development of music in Britain.

The Rolling Stones’ Mick Jagger and Led Zeppelin’s Jimmy Page are among the stars who are said to have been influenced by the show.

Sister Rosetta, from Sandy Grove, Arkansas, performed in Manchester during a tour of Britain that saw her earn £500 a week – the equivalent of more than £7,000 in today’s money.

The then 36-year-old was joined on her tour by English jazz star Chris Barber and his troupe of musicians.

She said at the time: ‘I’m sure glad to be here to show you the gift that God has given me.’

She added that, whilst she was not a preacher, ‘if I can get converts with my singing I shall be pleased.’

During her tour, the Daily Mail called her ‘Elvis in a skirt’ and said a performance in Hammersmith, West London, was an ‘evening of the blues; country blues, urban blues, piano blues, guitar blues’.

The gig in Manchester was born out of the successful Blues and Gospel Tour, which had made its debut in 1963.

The TV programme in which the gig was featured was made thanks to the city’s blossoming jazz and blues scene.

Concerts at the city’s Twisted Wheel nightclub and the Free Trade Hall regularly sold out. 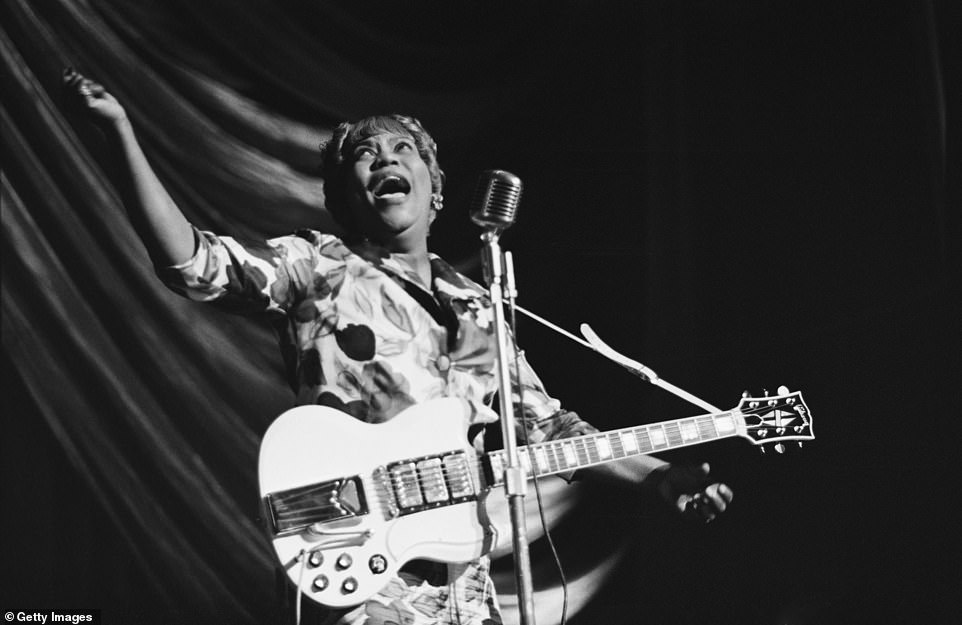 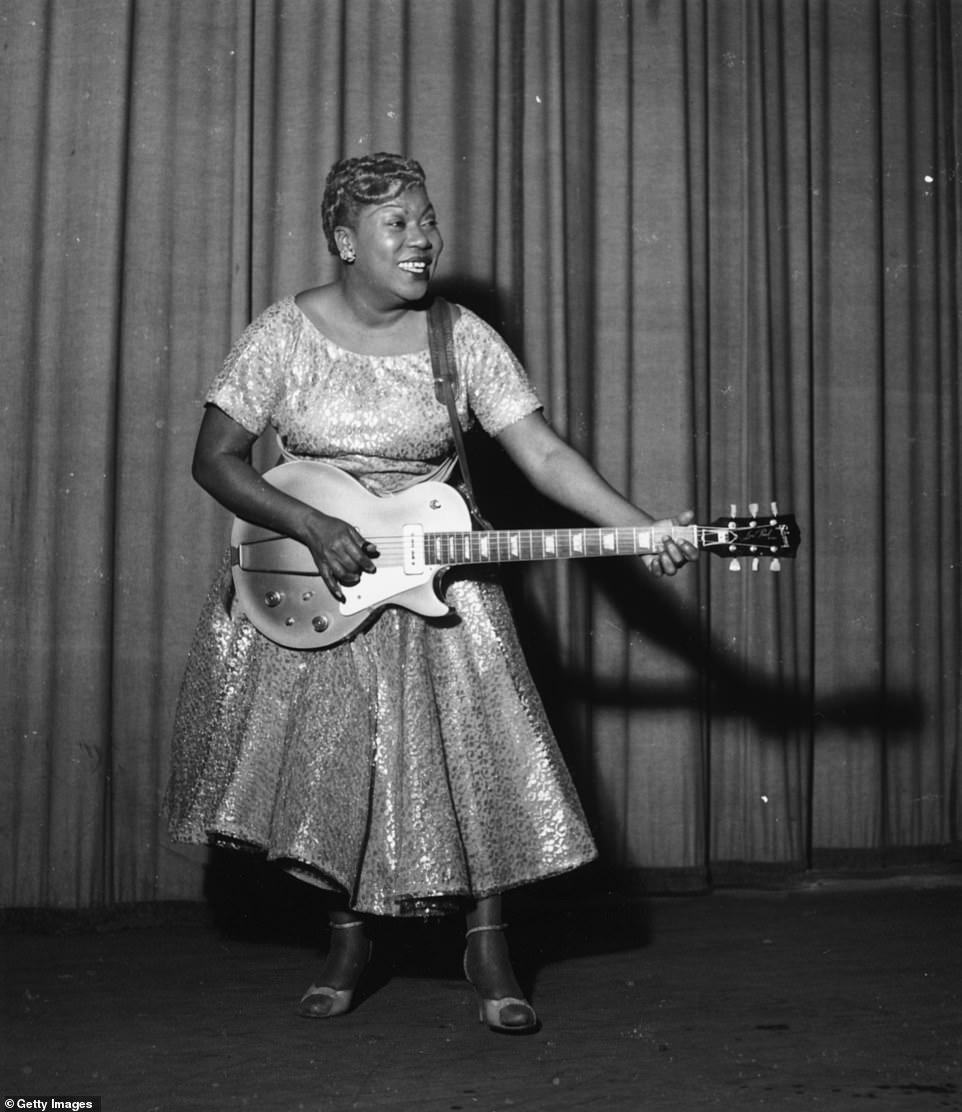 Sister Rosetta also came to the UK in 1957. She is seen above that year in Cardiff

Speaking to the BBC in 2014, Mr Hamp said that when the stormy weather began, Sister Rosetta asked to change her opening number.

‘Sister Rosetta came to me and asked if she could change her opening number to Didn’t It Rain?,’ he said.

‘When she strapped on her guitar, it was astounding.’

The show proved hugely popular with young people, who were inspired to form blues bands after seeing it.

The late musician and lecturer Dr Chris Lee, who passed away in 2020, told the BBC of the performance: ‘It was absolutely mind-blowing – a great song and a great gospel singer belting it out.’

Sister Rosetta first gained popularity in the 1930s with her gospel recordings, which were characterised by her religious lyrics and electric guitar.

She was later referred to as the ‘Godmother of rock and roll’  and the ‘original soul sister’.

American superstar Elvis Presley was among those she influenced, along with Johnny Cash and Little Richard.