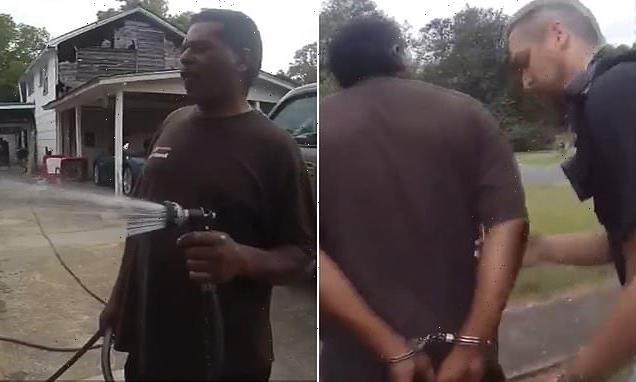 Pastor files lawsuit after he was handcuffed for watering flowers

Black pastor is set to file a discrimination lawsuit against the police after he was handcuffed for watering his neighbor’s flowers while they were out of town – despite a white woman stepping in and coming to his defense.

Pastor Michael Jennings was arrested in May outside his neighbor’s yard in Childersburg, Alabama, after police received a complaint about a strange man and vehicle on the property.

Jennings, who was seen in the clip watering the flowers with a hose, told police his long-term neighbor asked him to look after his shrubbery while he was out of town.

But despite his good neighborly intentions and other residents vouching for him, Jennings was taken to jail and later charged with obstruction of government operation.

After insisting that he was just calmly gardening in the front yard, police asked Jennings: ‘How do we know that’s the truth?’

The baffled pastor, who lives in the house across the street, responded: ‘I had the water hose in my hand! I was watering the flowers.’

Body camera footage showed three officers from Childersburg Police Department screaming at Jennings as he refused to provide identification – before he was ushered away in handcuffs. 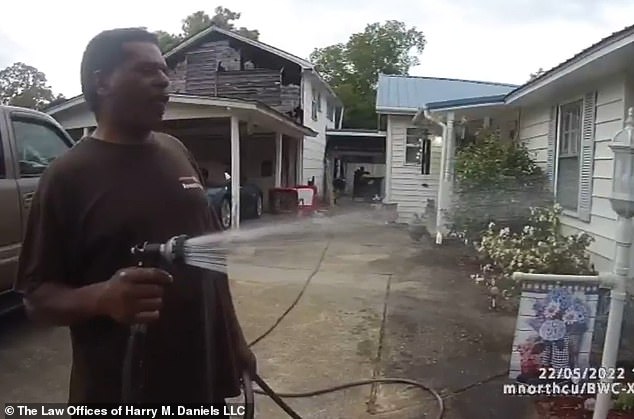 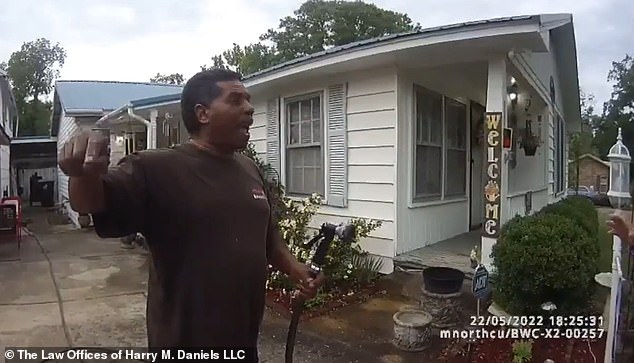 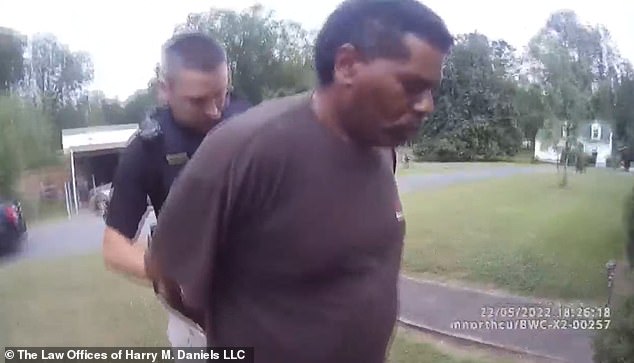 Jennings told police that he lived next door, but refused to provide them identification 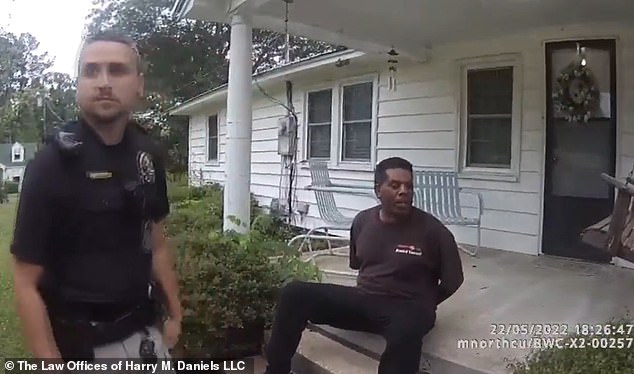 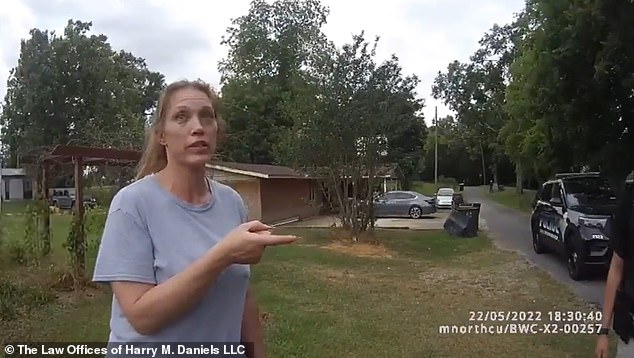 One of the female residents, who also lived on the street, told the officers that the pastor and the homeowner were indeed friends

Laughing in disbelief during the encounter, the pastor tells the officers: ‘Y’all racially profiled me.’

An unidentified officer then says: ‘We’re not racially profiling you,’ before Jennings rebukes: ‘Yes, you did.’

The officer continues: ‘No sir, no sir. We’re not about that okay?’

A white resident then intervened and told officers that Jennings lived next door –  insisting that he was friends with the homeowner who had left earlier that day.

‘He lives right there,’ the woman told police while pointing at Jennings’ property.

The pastor, from Vision of Abundant Life Ministries in Sylacauga, was arrested and placed in the backseat of the cop car, despite the woman vouching for him. His mobile phone was also taken from him during the arrest.

‘Does he have permission to be watering flowers?’ police asked the woman.

To which the neighbor responded: ‘He may because they are friends, and they went out of town today and he may be watering their flowers. It would be completely normal.’

She later added: ‘This is probably my fault.’ 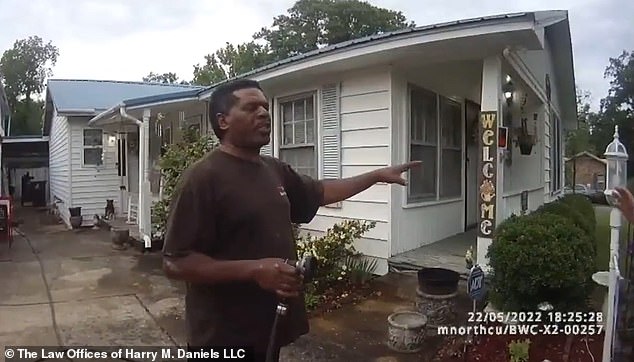 Jennings was watering the flowers in his neighbor’s yard when he was arrested. He told the cops that he was being racially profiled 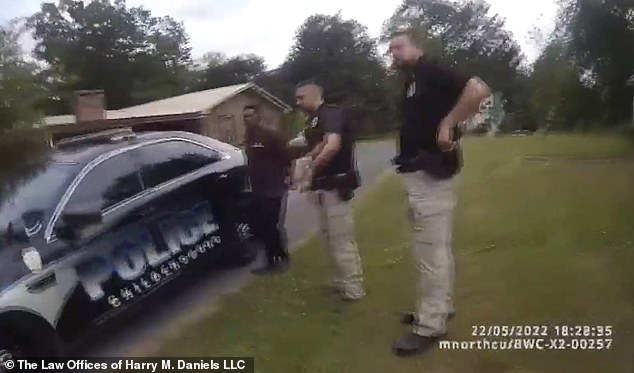 The pastor, from Vision of Abundant Life Ministries in Sylacauga, was arrested and placed in the backseat of the cop car, despite the woman vouching for him 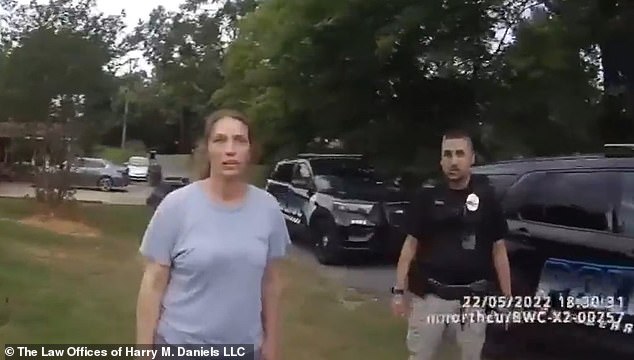 One local, who also lived on the street, came to aid the black pastor – but despite telling cops that they were friends, Jennings was still arrested and later charged

At one point during the ordeal, Jennings could be heard speaking about his long-term neighbor: ‘He is going to be so p***** when I tell him I got arrested for watering his flowers.’

Police later received notice the ‘suspicious’ car belonged to another man. Jennings’ wife and daughter later arrived to the scene to identify him, but he was later charged with obstruction of government operation.

The charges were dropped one month later – but now the pastor is set to file a discrimination lawsuit against the officers.

Following the ordeal, Jennings said that the ’emotional toll’ will take him time to recover from.

Jennings’ attorney, Harry Daniels told WBRC: ‘These cases put law enforcement on notice and the country on notice that these types of interactions – thank God that Pastor Jennings had a cool head. 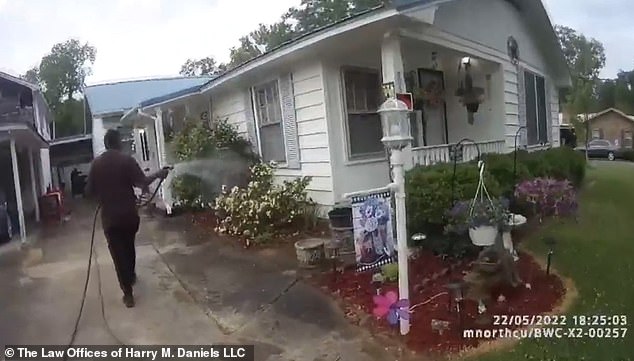 Jennings, with a hosepipe in hand, was generously watering his neighbor’s flowers while they were out of town 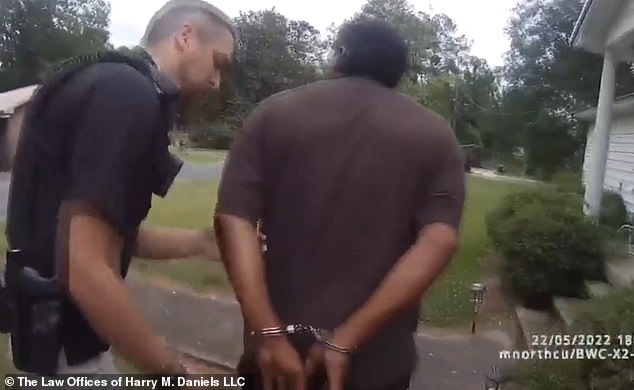 He was ushered away in handcuffs. Jennings says that he was the victim of racial profiling 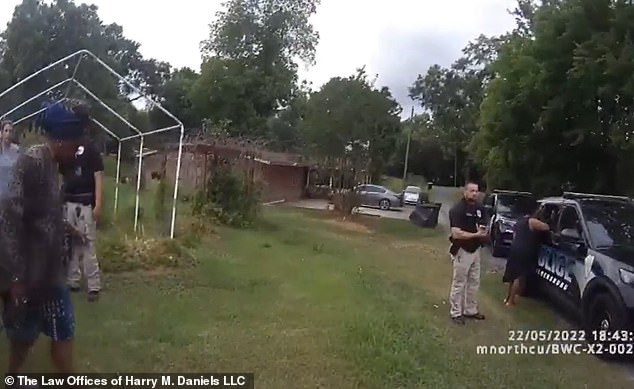 Multiple neighbors stood around in shock as the local pastor was taken away in the cop car. Jennings was charged, but a month later it was dropped

‘He didn’t get aggressive or defensive in a sense, and he complied when the officers grabbed him.’

When police asked Jennings to prove his identity, he refused since he knew – having  a background in law enforcement – that he was not obliged to because he was not committing a crime.

The attorney added: ‘It represents an abuse of police powers.

‘It represents racial profiling and it represents law-enforcement officers intimidating a person who actually understands and knows their rights.’

The lawsuit against the Childersburg Police Department hasn’t been filed. The department did not respond to requests for comment by DailyMail.com.