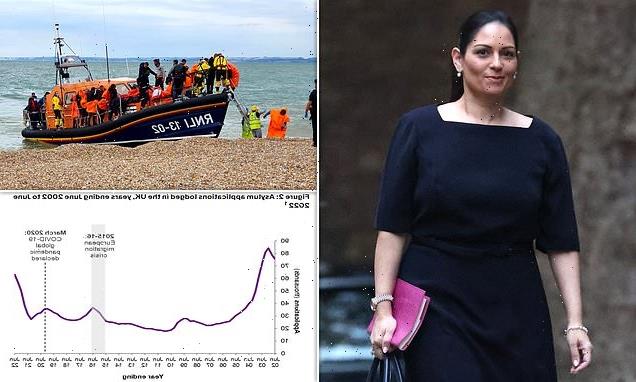 More than 2,000 Afghans made dangerous Channel crossing this year

More than 2,000 Afghans made dangerous Channel crossing in small boats this year – and are at risk of being sent to Rwanda

More than 2,000 fleeing Afghanistan are risking their lives to reach the UK on small boats – and are at risk of being sent to Rwanda after arriving.

The number of Afghans crossing the English Channel on small boats has increased since the Taliban’s takeover of Kabul last year, making up just under a fifth of arrivals in the first half of 2022, Home Office figures show.

Since 2020, a ‘greater mix of nationalities have been detected making the crossing’, with Albanian and Afghan nationals ‘becoming notably more common in 2022’, the Government said. 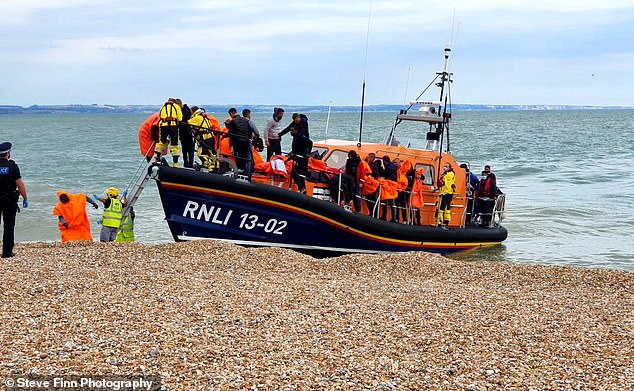 Separate figures also published on Thursday show that more than 11,300 Afghan refugees have received indefinite leave to remain in the UK under two visa schemes set up for them.

These are the Afghan Relocations and Assistance Policy (Arap) for current and former locally employed staff, and the Afghan Citizens Resettlement Scheme (ACRS).

Those arriving by small boats are not eligible via these visa routes but can claim asylum, with the majority doing so.

But, according to officials, there is the potential that they could be taken to Rwanda under the agreement struck by Home Secretary Priti Patel four months ago in a bid to curb Channel crossings.

Under the deal, the East African nation will receive migrants deemed by the UK to have arrived ‘illegally’ and are therefore inadmissible under new immigration rules.

But the first deportation flight – due to take off on June 14 – was grounded amid legal challenges. 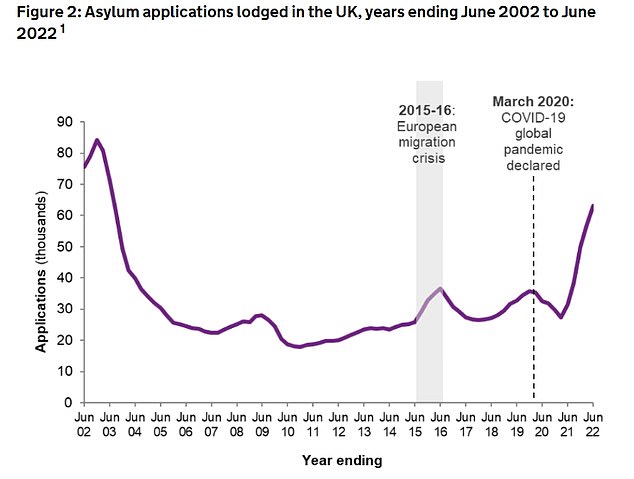 The Home Office figures also show that there were just over 5,000 applications for asylum from Afghans in the year to June 2022.

Afghans were the fourth most common nationality applying for asylum, after Iranians, Iraqis and Albanians.

Ms Patel said she is ‘incredibly proud’ that nearly 21,500 people, including British nationals, have been brought to safety from Afghanistan.

She said: ‘One year on, our work to help Afghans resettled in the UK has not stopped – there are still weekly flights, our resettlement schemes remain open and we will be welcoming thousands more people to our country.’

Dr Peter William Walsh, senior researcher at the Migration Observatory at the University of Oxford, said refugees have ‘vastly different experiences’ depending on where they are coming from.

He said: ‘Most Afghan refugees cannot access the UK resettlement schemes, and there is no way to apply to them.

‘That explains why a substantial number of Afghans are coming through the asylum system despite the prospect of long waiting times and recent policies designed to deter asylum seekers.

‘By contrast, where there have been legal routes to seek protection in the UK as in the Ukraine and Hong Kong cases, people have been keen to take them up.’

Marley Morris, IPPR associate director for migration, trade and communities, said: ‘Despite the Government’s claims to support Afghan refugees, many believe they are being left with no option but to attempt the dangerous journey across the Channel.

‘These figures make clear that the asylum system needs urgent reform. The Government should ramp up safe and legal routes, speed up asylum decision making, and drop its inhumane plans to relocate asylum seekers to Rwanda.’ 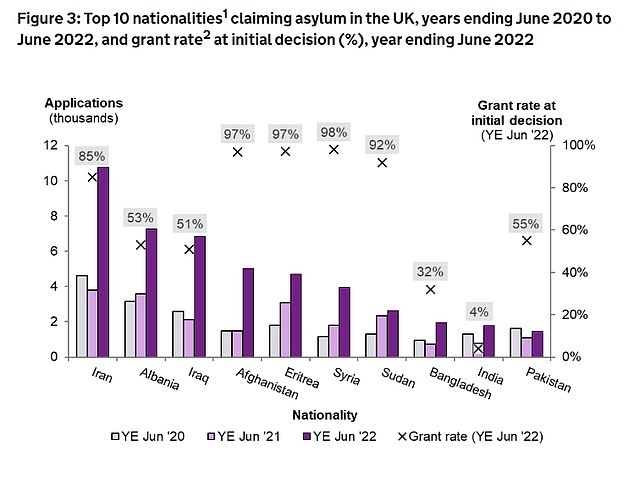 The rise has been linked to a sharp increase in the number of small boat crossings. Iranians have been the top nationality, followed by Albanians, Iraqis, Afghanis, Syrians and Sudanese

New ‘inadmissibility’ rules allow officials to send asylum seekers to a ‘safe third country’ they have travelled through on their way to the UK. This can also include countries that have agreed to receive asylum seekers from Britain, such as Rwanda.

Yet while 17,222 asylum claimants have had their cases considered on inadmissibility grounds since the rules came into effect on January 1, 2020, just 21 have ever actually been removed.

They went to countries including Ireland, Germany, Italy and Spain.

Meanwhile, a total of 1.1million people were offered visas for work, study or to visit their family.

The dramatic rise in asylum applications has been linked to a sharp increase in the number of small boat crossings. Iranians have been the top nationality, followed by Albanians, Iraqis, Afghanis, Syrians and Sudanese.

The backlog of Home Office decision is at a record high, with more than 166,000 cases still ongoing. 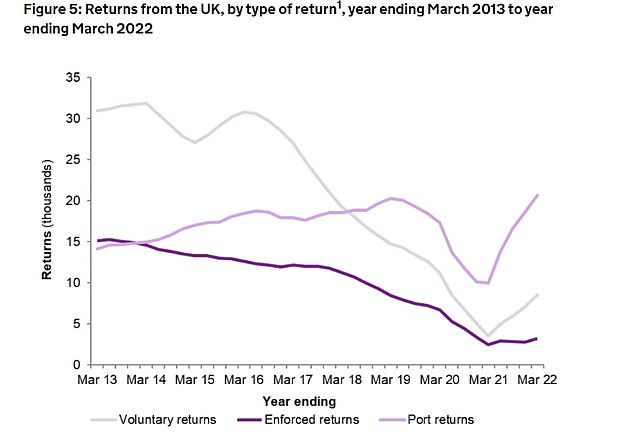 In year to March, a total of 3,231 people were forced to leave UK – less than the figure for 2019. This refers to migrants in general, including foreign criminals

More than three quarters of applications were given the go ahead at the first stage in the year to June, and half of the refusals appealed were successfully overturned.

Meanwhile, the government appears to be planning to attempt a new deportation flight to Rwanda, with some newly arrived migrants receiving letters their cases had been deemed ‘inadmissible’, the Guardian reports.

The letters went on to say tell the asylum seekers the government intends to send them to Rwanda to have their claims processed there. They have 14 days to raise objections over their forced removal to the east African country.

It comes as Home Office data revealed nearly 6,000 Albanians are thought to have crossed the Channel to the UK so far this year after numbers increased ‘substantially’ over the last few months.

Albanians were rarely seen on migrant boats arriving on the south coast before this year but officials now believe this is the dominant nationality in the crossings, with numbers growing rapidly.

Some 2,165 were recorded as arriving between January and June 2022, compared with just 23 detected in the same period the previous year, according to a Home Office report published on Thursday.

Officials say between 50 per cent 60 per cent arrivals are now thought to be from the south-eastern European country, many of which recently have been young men.

It comes as Home Secretary Priti Patel struck a deal with the Albanian government to step-up police activity and fast-track removals in a bid to tackle crossings.

More than 23,300 people have arrived in the UK after navigating busy shipping lanes from France in small boats such as dinghies so far in 2022, according to provisional government figures. 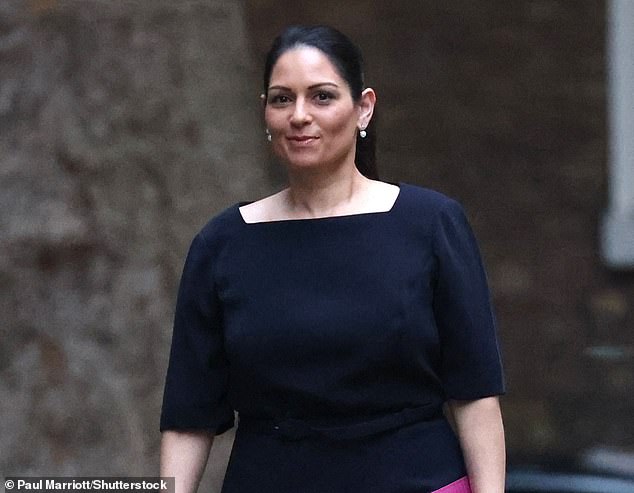 Officials fear crossings are becoming more dangerous – with the average number of people per boat now standing at 44 in August, compared to 28 in 2021 – and think it is remarkable there have not been any serious incidents, such as drownings, so far this year.

‘The number of Albanians arriving on small boats has increased substantially over the last quarter. Prior to this point, Albanians were not commonly detected on small boats’, the Home Office findings said.

The nationality is said to be seen as the biggest challenge by officials, after just under 60% of the record breaking number of 1,295 migrants who arrived in Kent on Monday were believed to be from Albania.

UK officials do not know definitively what is behind the surge but believe it could be prompted by organised crime and driven by families looking to reunite.

Lucy Moreton, from the ISU union which represents Border Force officers, said: ‘Members report the working hypothesis that the recent increases in Albanians is to replace those who have been arrested, imprisoned and/or deported as a result of increased police activity in the organised crime sphere.

‘This is a hypothesis only, but does make sense.’

Albanian officials are said to be embarrassed by the numbers involved in the crossings. A delegation is due to arrive next week to discuss how the two countries can tackle the rising numbers. 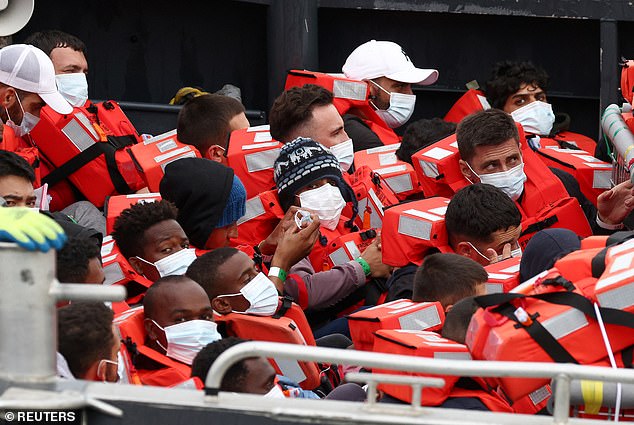 Migrants arrive into Dover harbour onboard a Border Force Vessel, after being rescued while attempting to cross the English Channel yesterday

As part of the agreement between Ms Patel and Bledi Cuci, Albania’s minister for interior affairs, Albanian police are to be sent to ports to work alongside UK authorities, providing intelligence and observing migrants being processed. It is hoped the operation will begin within days of the delegation’s visit.

The pair have also pledged to speed up removals of Albanians with no right to be in the UK from next week.

Fewer than 1,000 Albanian offenders have been deported from the UK since a removals agreement was signed last year. But under the latest plans, Albanians will have their asylum applications fast-tracked and those with unsuccessful claims could be put on flights within weeks.

The Home Office is also targeting people in northern France and Belgium, and those who ‘meet certain criteria, such as being away from home’, with adverts in Albanian on Facebook and Instagram to try to deter people from making the crossing.

This comes after officials saw a rise in adverts pushing Channel crossings over the last month, including those offering discounts for children and disabled people.

A Home Office spokesperson said: ‘The rise in dangerous Channel crossings is unacceptable. People should always claim asylum in the first safe country they reach.

‘Our New Plan for Immigration is bringing in the biggest reforms in decades, allowing us to support those in genuine need while breaking the business model of vile people smugglers.

‘We are committed to removing those who have no right to be in the UK. In the past fifteen months, the Home Secretary has signed major returns agreements with Pakistan, Albania, India, Serbia and Nigeria and we continue to work with countries on new agreements.’