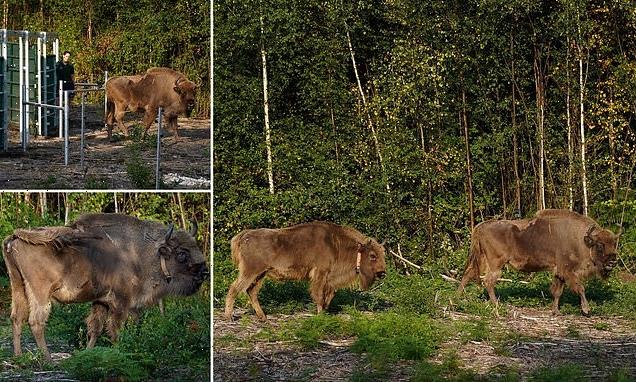 This is the moment three wild bison were released into the British countryside as part of a £1.1 million rewilding project.

The huge beasts have been extinct in the UK for 6,000 years, but were this morning released into a fenced enclosure to manage West Blean and Thornden Woods near Canterbury, Kent.

European bison, the continent’s largest land mammal, are the closest living relative to ancient steppe bison that once roamed Britain and naturally managed the habitat, conservationists say. They are slightly larger than the American bison, but less heavy and aggressive.

A matriarch from Scotland and two young females from Ireland were introduced into the enclosure today.

They will be joined by a young bull from Germany in mid-August after his arrival was delayed to due import issues.

The females have been fitted with tracking collars to allow conservationists to track their movements and gain insights into the plants they are interacting with.

The animals are known as ‘eco-system engineers’, creating muddy ponds, pushing down trees and disturbing the soil to help plants and other animals thrive. 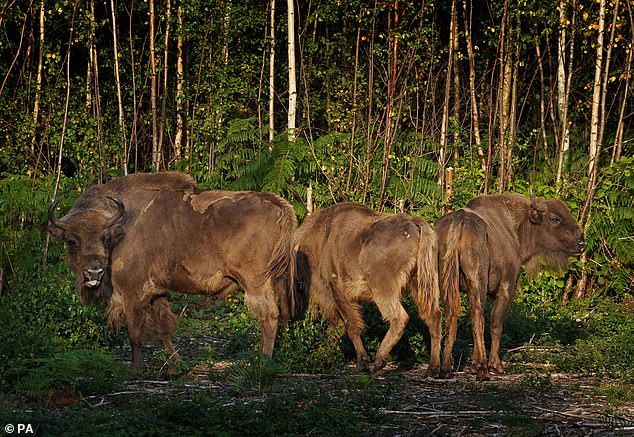 Three of four of bison pictured being released into West Blean and Thornden Woods, near Canterbury in Kent this morning 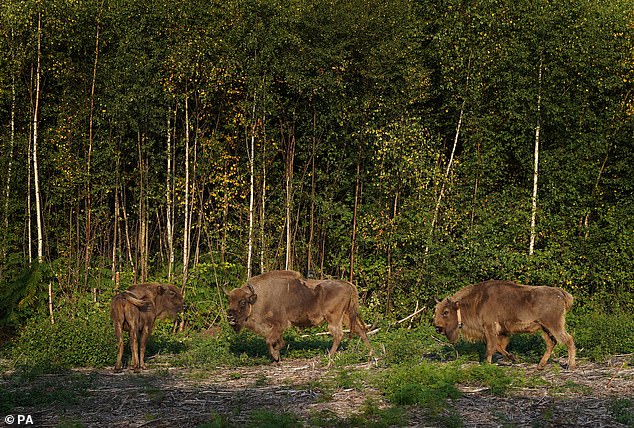 The huge beasts have been extinct in the UK for 6,000 years, but were this morning released into a fenced enclosure 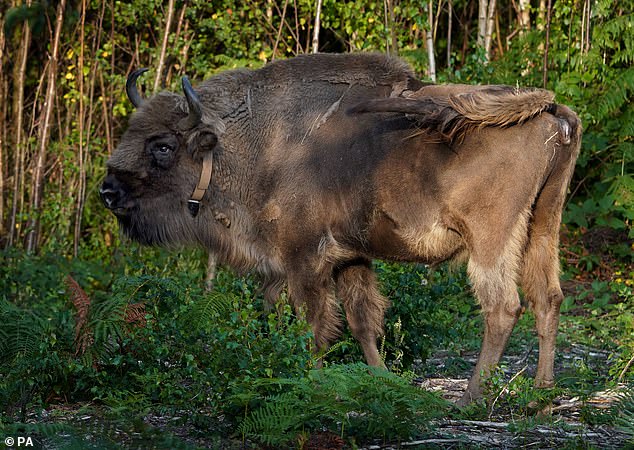 One male and three female bison – a bull from Germany, a matriarch from Scotland and two youngsters from Ireland – were released today 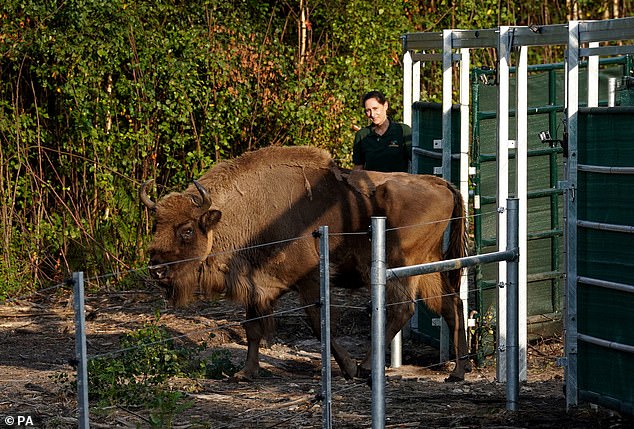 Rangers open a gate to allow one of the four bison to walk into its new enclosure as part of a £1.1m project 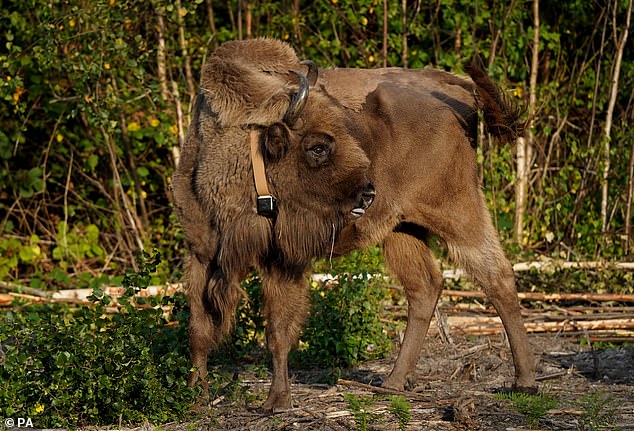 The European bison (pictured today) are slightly larger than the American bison, but less heavy and aggressive 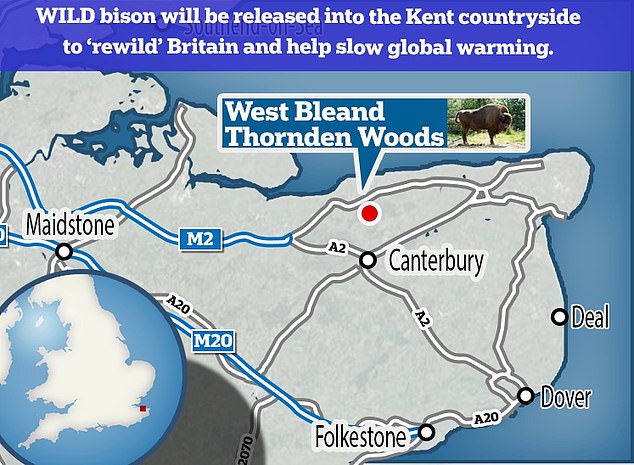 The ‘Aryan’ animal loved by Nazis

It is hoped that they will help restore complex habitats be more able to cope with climate change, and store more carbon in woodland to reduce the emissions driving up temperatures.

The bison will change the forest away from a monoculture and create wetter areas that will not only store carbon but reduce flood risk, conservationists hope.

Their release is being led by the Kent Wildlife Trust and the Wildwood Trust as part of a £1.12 million scheme funded by the People’s Postcode Lottery Dream Fund.

They will soon be joined by other grazing animals including Exmoor ponies, Iron Age pigs and Longhorn cattle, who will also create a variety of natural habitats.

It comes as temperatures in parts of the UK are set to soar to nearly 40C, with health officials declaring a ‘national emergency’ due a heatwave thought to made more intense and likely by climate change.

Donovan Wright is one of two bison rangers who will look after their welfare, the enclosure’s fencing and help with public engagement.

He says the animals were an important keystone species that shaped the habitat they were in.

The ranger added: ‘They’ve got this remarkable ability to increase biodiversity just through being bison.

‘We really need that in the woods.’

Mr Wright said their feeding activities, including stripping back trees and rubbing off bark, creates microhabitats such as standing deadwood for insects and fungi.

Their fur is also collected by birds for nesting.

He continued: ‘You get this ricochet effect through the ecosystem, so many species are able to benefit from the bison in the ecosystem.’

Evan Bowen-Jones, chief executive at Kent Wildlife Trust, said: ‘The restoration of naturally functioning ecosystems is a vital and inexpensive tool in tackling the climate crisis. 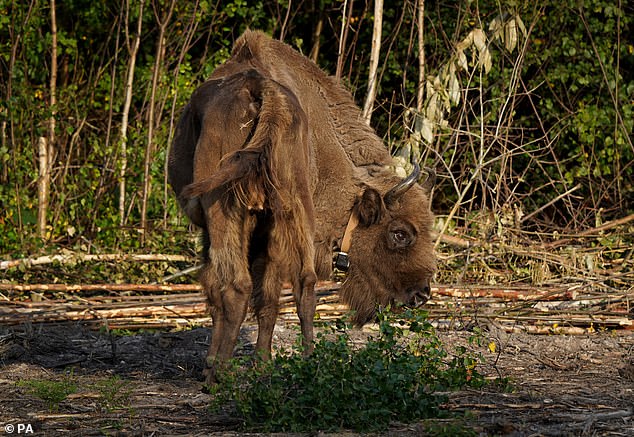 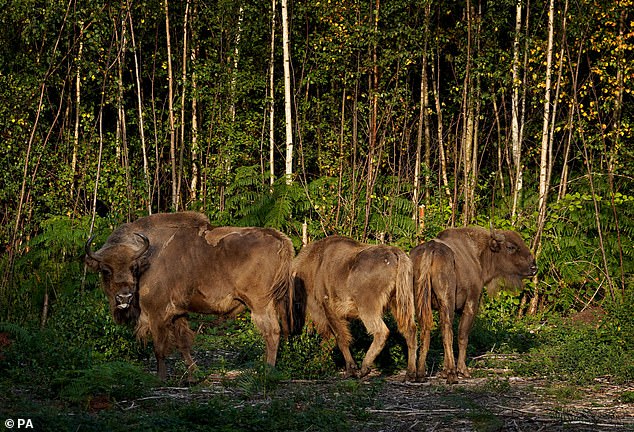 ‘The bison will help to create climate resistant landscapes which can adapt to the challenges presented by the crisis we face.’

Mr Bown-Jones added that there was a need to revolutionise the way landscapes were restored, with less human intervention and more use of natural engineers such as the bison, boar and beaver.

And he said he hoped the Wilder Blean project would connect people with nature in a way that had not been possible before because big wild animals had not been in the British countryside, and that visitors would be inspired by it.

Paul Whitfield, director-general of the Wildwood Trust, which is leading the project with the Kent Wildlife Trust, said: ‘They will create an explosion of biodiversity and build habitat resilience, locking in carbon to help reduce temperature rise.

‘Not only this, but we’re giving people in the UK – for the first time in over 1,000 years – the chance to experience bison in the wild.

‘It’s a really powerful, emotional, visceral experience and it’s something we’ve lost in this country.’

Evan Bowen-Jones, chief executive of Kent Wildlife Trust, added: ‘We need to revolutionise the way we restore natural landscapes – relying less on human intervention and more on natural engineers such as bison, boar and beaver.’