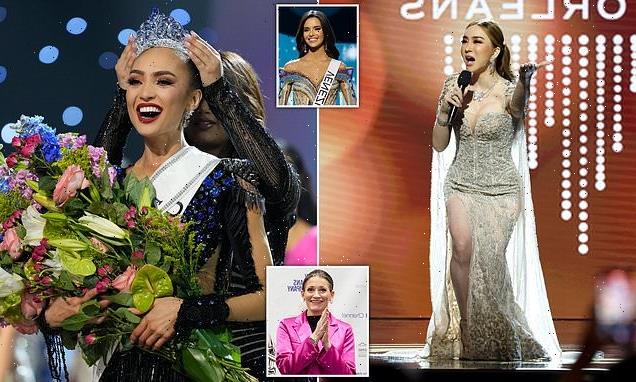 The Miss Universe Organization has denied allegations that the beauty pageant was rigged so that R’Bonney Gabriel of the United States could win the competition, slamming the claims as ‘absurd’.

But the organizers said the allegations were ‘false’ and ‘absurd’, adding that the claims ‘distract’ from Gabriel becoming the first Filipino American to be crowned as Miss Universe.

And Amy Emmerich, the CEO of Miss Universe, said the results of the competition were handled and verified by a top accounting firm after Gabriel, 28, beat runner up Miss Venezuela, Amanda Dudamel. 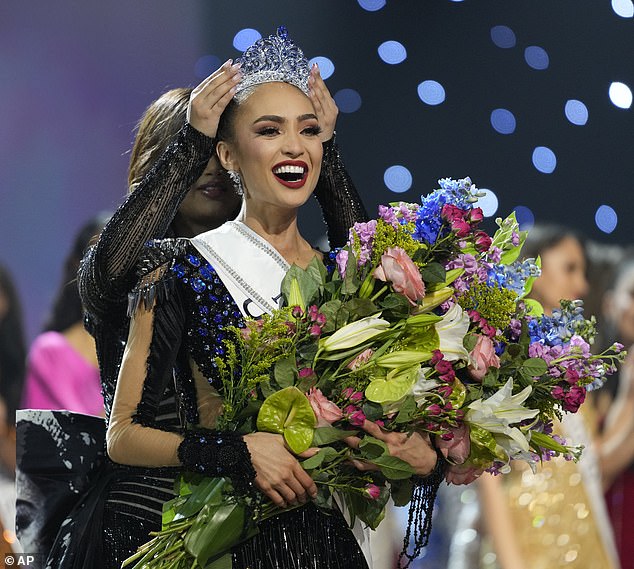 The CEO of Miss Universe has denied allegations that the beauty pageant was rigged so that R’Bonney Gabriel of the United States could win the competition. Pictured: Gabriel beams as she is crowned Miss Universe in New Orleans on Saturday night 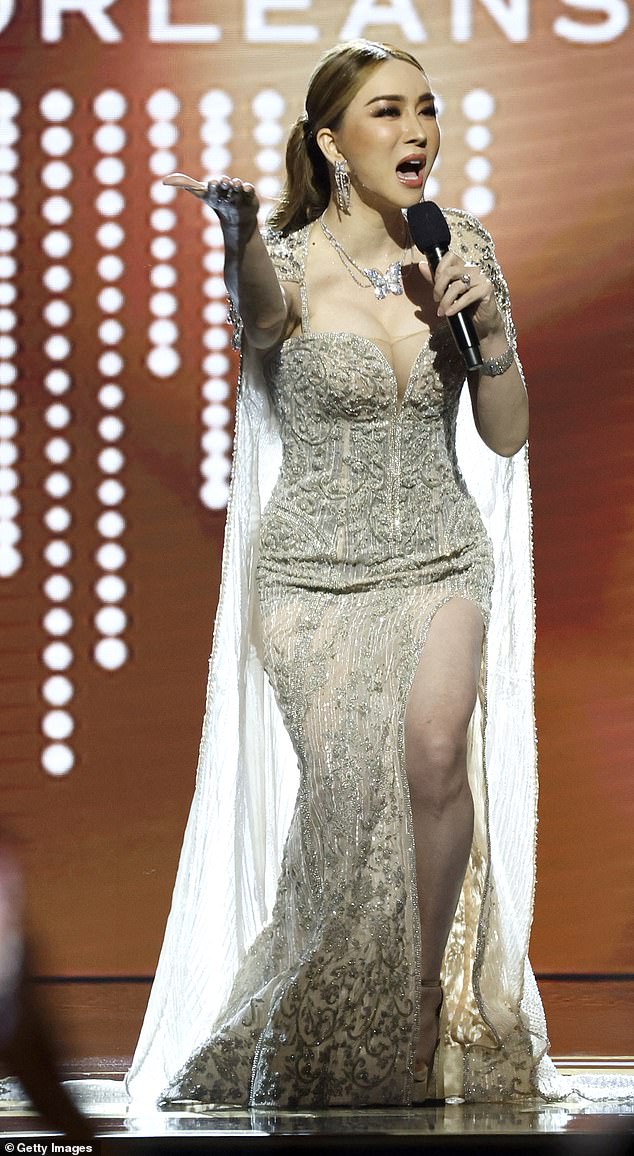 ‘One of the top four accounting firms in the United States handled the results and verified the process,’ Emmerich told TMZ.

Jakrajutatip, the CEO and biggest shareholder of JKN Global Group Pcl (JKN), has been accused of rigging the Miss Universe competition so that Gabriel, who won Miss USA in October, could win.

Critics have pointed to how Jakrajutatip’s JKN company owns both Miss Universe and Miss USA competitions, and suggested Gabriel, who became the first Filipino American to win Miss Universe, was pre-picked to win Sunday night’s competition.

But Emmerich told TMZ: ‘The allegations regarding the rigging of Miss Universe are false.

‘People saying that it’s ‘suspect’ that JKN Global Group owns both Miss Universe and Miss USA aren’t familiar with the history of the organizations.’

Emmerich added that Gabriel, a fashion designer, model and sewing instructor from Texas, was a ‘strong and dedicated contestant’ who is the ‘rightful Miss Universe’.

The Miss Universe Organization also said in a statement: ‘The false rigging allegations are absurd and distract from the incredible milestones our organization and the delegates experienced this weekend.’ 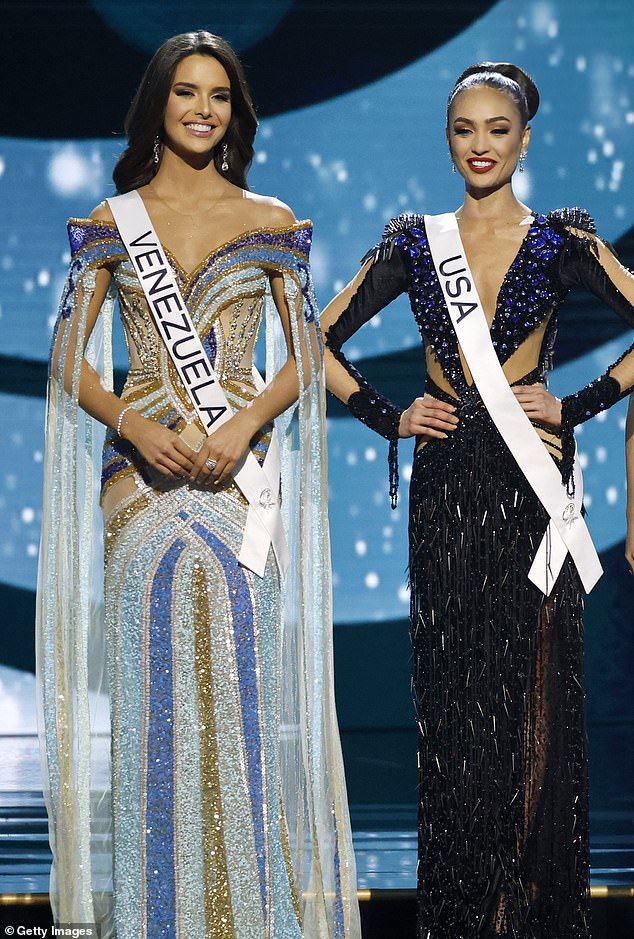 But Amy Emmerich, the CEO of Miss Universe, said the results of the competition were handled and verified by a top accounting firm after Gabriel, 28, (centre) beat runner up Miss Venezuela, Amanda Dudamel (left) 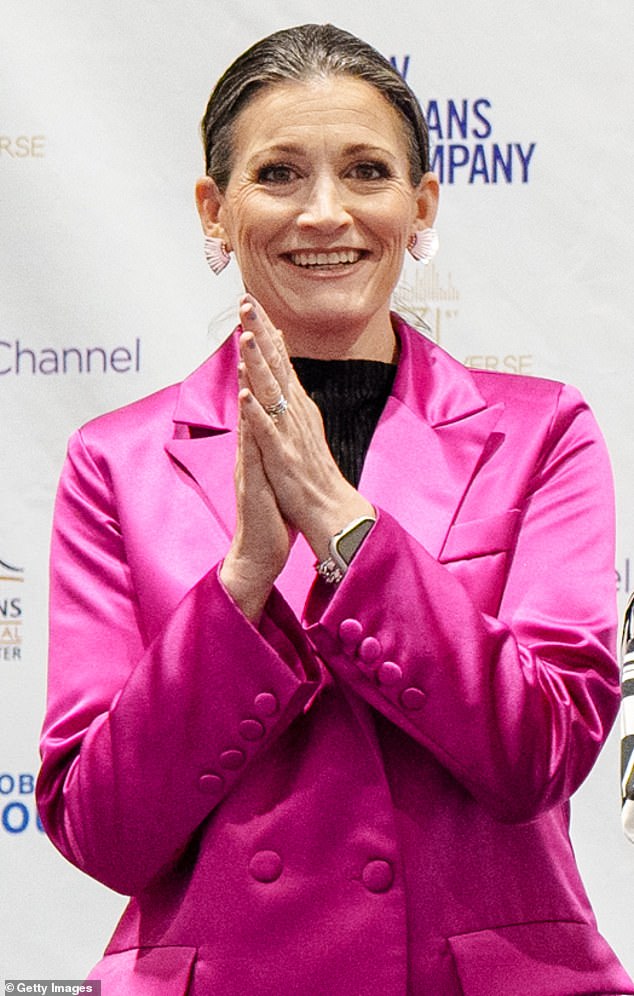 Amy Emmerich (pictured on January 12 in New Orleans), the CEO of Miss Universe, said the results of the competition were handled and verified by a top accounting firm

The controversy surrounding Gabriel’s win at Miss Universe over the weekend comes just months after she became Miss USA on October 3.

Contestants accused ‘woke’ Miss USA of giving Gabriel preferential treatment and preselecting her to win because she’s Filipina – making her the first Filipina American to be crowned at the competition.

Gabriel denied the allegations against her at the time, saying there was ‘no unfair advantage’ and she ‘would never enter any pageant or any competition that I would know I would win.’

Indeed, Emmerich told TMZ yesterday that an independent third-party law firm was hired to look into the allegations that the Miss USA pageant had been rigged in October.

She said the law firm determined the allegations were unfounded.

But fellow American contestants of Miss USA said at the time that Gabriel’s win had been the result of ‘favoritism.’

The legitimacy of her win was also challenged by fellow contenders who said it was suspect that a beauty treatment company that offers a price to the winner featured Gabriel in an ad less than 24 hours after she won.

Gabriel appeared in an ad for NIZUC spas less than 24 hours after she won the Miss USA pageant, which led other competitors to believe the contest had been rigged from the start.

‘@MissUSA was crowned less than 24 hours ago, yet she already got her sponsored vacation to @NIZUCResort,’ she wrote. 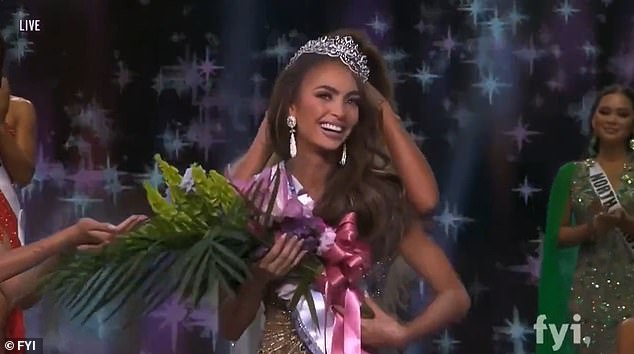 She added: ‘Are you kidding me? I was giving y’all the benefit of the doubt, but this is just embarrassing at this point.’

In her defense, Gabriel claimed that she was a brand ambassador for NIZUC’s affiliate company MIA Beaute, which also sponsors the Miss Texas pageant and was opening a new spa at the NIZUC resort in Mexico.

Doubters didn’t necessarily buy the excuse, however, noting that the founder of MIA is one of the judges at the Miss USA competition. O’Keefe claimed that Gabriel’s ambassadorship was a violation of the handbook and that no contestant should have been allowed to work with Miss USA national sponsors.

Controversy continued to spiral for Gabriel when a picture of Crystle Stewart, one of the Miss USA organizers, doing Gabriel’s hair backstage circulated. The picture served as greater fodder for the claim of favoritism.

However, Gabriel said the photo was snapped the day after the crowning just before official Miss USA headshots.

Ms Jakrajutatip bought Miss USA and Miss Universe in the days after the controversy first emerged.

The businesswoman, who has a more than seven million follower count on Instagram, went from working at a gas station to becoming the billionaire owner of a media and content conglomerate.

Her firm partnered with media giants like Walt Disney, CBS, and Sony, and also brought Korean, Chinese, and Indian productions to Thai TV.

She also appeared on the Thai version of Shark Tank and Project Runway.

On Saturday night, Gabriel was crowned as Miss Universe. She was draped in the winner’s sash and crowned with a tiara onstage at the 71st Miss Universe Competition, held in New Orleans.

In the Q&A at the last stage of the competition for the three finalists, Gabriel was asked how she would work to demonstrate Miss Universe is ‘an empowering and progressive organization’ if she were to win.

‘I would use it to be a transformational leader,’ she responded, citing her work using recycled materials in her fashion design and teaching sewing to survivors of human trafficking and domestic violence.

‘It is so important to invest in others, invest in our community and use your unique talent to make a difference,’ Gabriel continued. ‘We all have something special, and when we plant those seeds to other people in our life, we transform them and we use that as a vehicle for change.’ 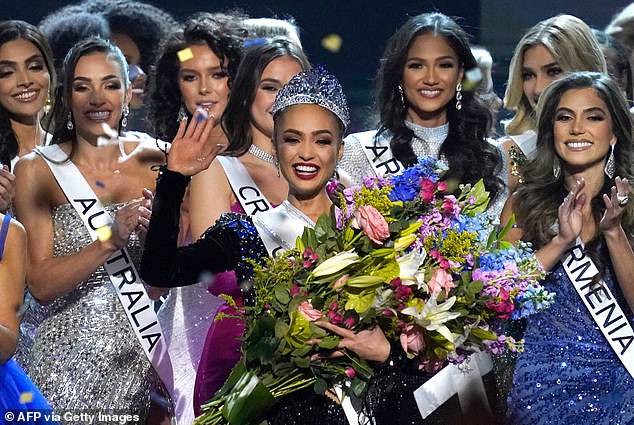 According to Miss Universe, Gabriel is a former high school volleyball player and graduate of the University of North Texas. A short bio posted on the organization’s website said she is also CEO of her own sustainable clothing line.

Nearly 90 contestants from around the world took part in the competition, organizers said, involving ‘personal statements, in depth interviews and various categories including evening gown & swimwear.’

Saturday night’s pageant was held in New Orleans to honor the late Cheslie Kryst, who was crowned Miss USA at the same venue in 2019.

The pageant paid tribute to Kryst, who jumped to her death in New York City last January, just several weeks after appearing as a correspondent for the 70th Miss Universe competition.

Kryst’s mother appeared on stage Saturday to announce that the National Alliance on Mental Illness established the Cheslie Kryst Memorial Fund for Mental Health in her honor.

‘Cheslie dealt with high-functioning depression,’ said her mom, April Simpkins, said on the competition stage. ‘The Chelsie you saw didn’t always match the way she felt inside. Just because someone tells you they’re fine, doesn’t mean they are.’