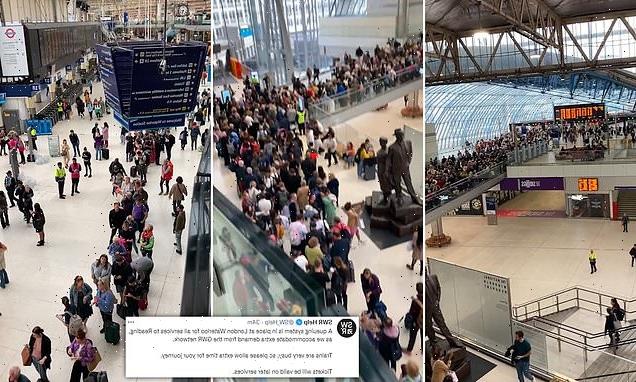 Long queues at Waterloo with all trains from Paddington cancelled

Now for the great rush home: Up to two million mourners attending Queen’s funeral pack out stations with queues of passengers lining up to board carriages with trains to and from Paddington still cancelled

Tens of thousands of mourners who travelled to London for the Queen’s funeral face long queues for trains get home after all services from Paddington were cancelled.

People seeking to leave London from Paddington station were advised to instead travel to Reading via Waterloo but pictures show extremely long queues for these services.

No trains are expected to run to or from London Paddington, South Wales and the West of England for the rest of the day, with lines between the station and Reading having been blocked since 6.30am due to two miles of damaged overhead electric wires.

Engineers from Network Rail are trying to repair the damage at Hayes and Harlington station, near Heathrow airport.

Great Western Railway, Heathrow Express and Elizabeth line services have all been affected and disruption could run into tomorrow.

South Western Railway issued a warning to people trying to make alternative arrangements: ‘A queuing system is in place at London Waterloo for all services to Reading, as we accommodate extra demand from the GWR network. 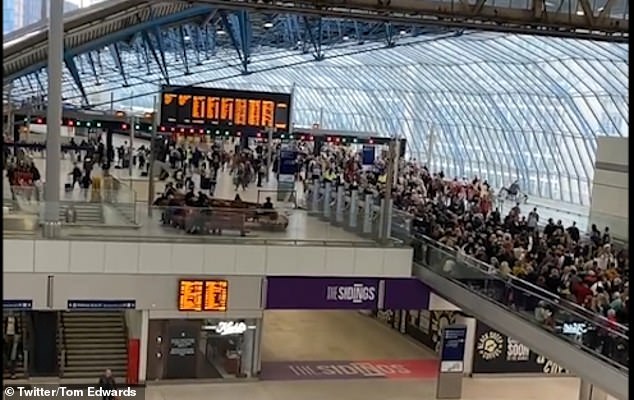 Hundreds of people are queuing for trains leaving Waterloo for Reading, after their route was disrupted by the closure of Paddington Station 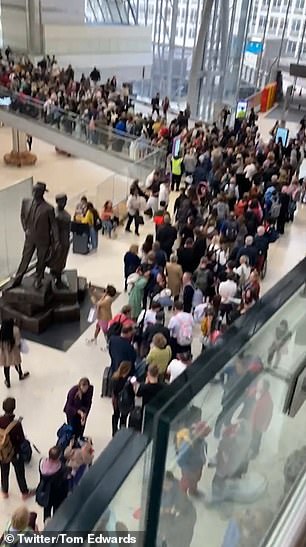 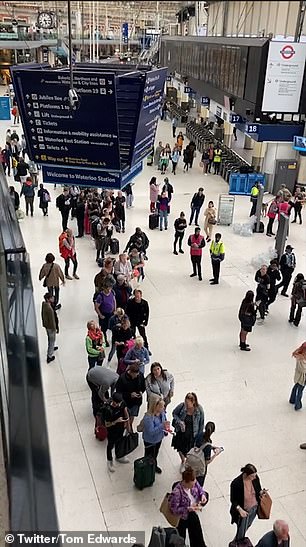 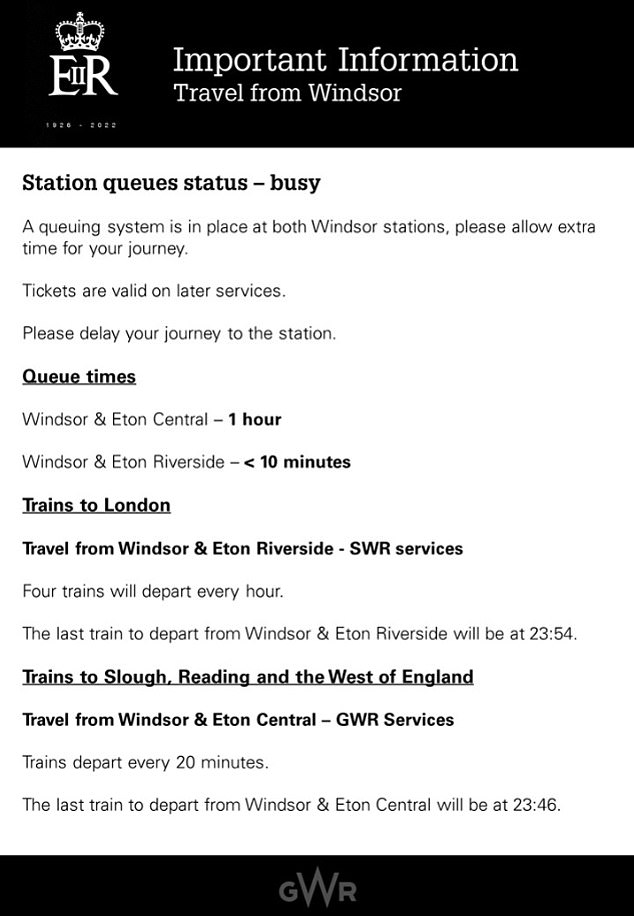 ‘Trains are very busy, so please allow extra time for your journey.

‘Tickets will be valid on later services.’

Meanwhile, people who travelled to Windsor to see the Queen’s coffin arriving at St George’s Chapel this afternoon face up to an hours wait to even get into the station.

The train company also confirmed that the Night Riviera Sleeper service between Paddington and Penzance will not run in either direction tonight, meaning people hoping to travel back to Cornwall might be stuck in London overnight. 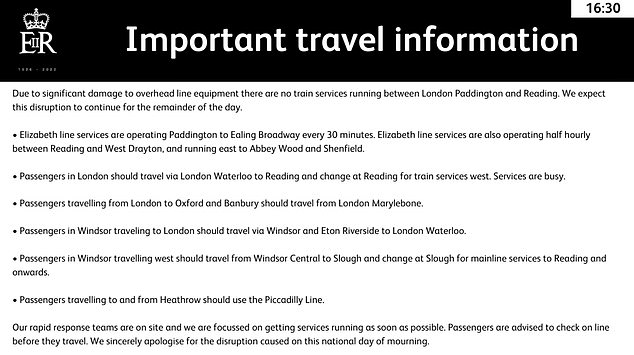 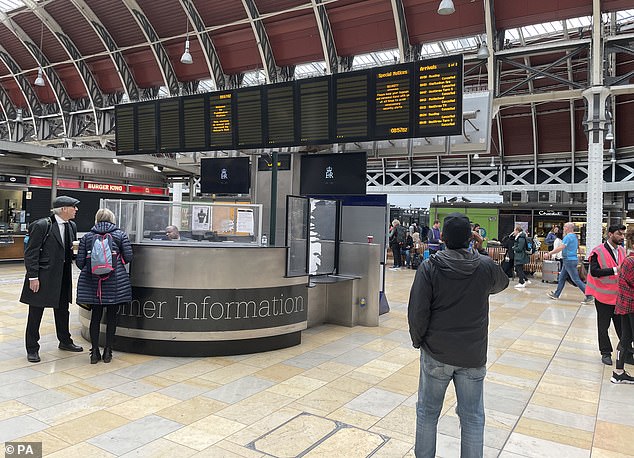 Passengers looked at blank screens at Paddington Station earlier today, after services were disrupted due to two miles of damaged overhead electric wires

One woman who was a sign language interpreter at Westminster Hall for the Queen’s lying-in-state told BBC News that she was unsure how she would be able to get home to Maidenhead after all trains from Paddington were cancelled.

She said: ‘I’m obviously going to have to travel across London again to get to Waterloo or Victoria to get a coach or a train but even then I can only get some of the way, I can’t get all the way to Maidenhead. And there will be thousands of people who won’t be able to get home later.’

With GWR trains having been affected all day, some people were unable to even get to London for the funeral.

Barry Boffy, who had received an invitation to the Queen’s funeral at Westminster Abbey, only managed to get as far as Reading before he had to turn back.

The former British Transport Police officer from Bristol told the broadcaster that he was ‘very disappointed’ to have missed the service, adding: ‘For me this absolutely would have been a once in a lifetime event. It’s certainly the first time I’ve been invited to this type of state event. And it’s unlikely that I’ll be invited to a similar event in the future.’ 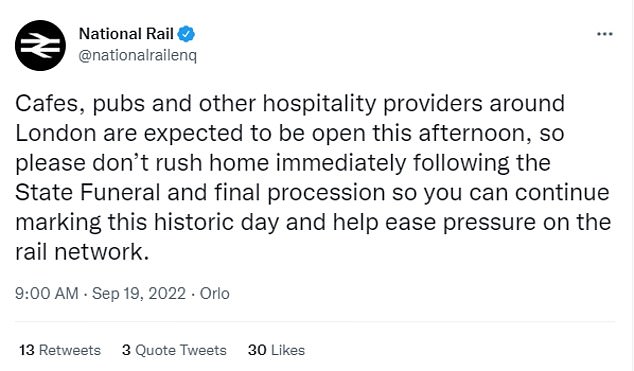 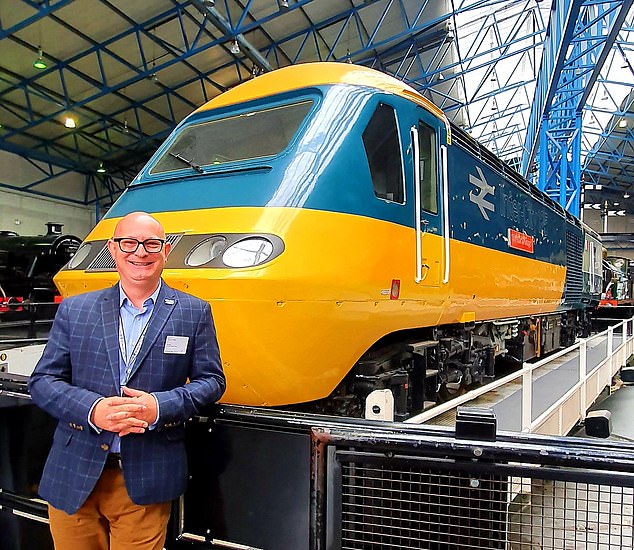 Hundreds of GWR passengers on five early morning trains into Paddington station had to be walked down the track to safety after the electric power lines went down this morning.

A GWR spokesman told MailOnline that the trains were evacuated and passengers taken to safety at the nearest station.

The spokesman added: ‘There will be no services in and out of Paddington station for the rest of the day.’

The problem at Hayes and Harlington station was reported at around 6.45am.

Matilda Spiers was travelling from Cholsey to London Paddington in hope of watching the funeral from Hyde Park.

She told MailOnline they were stuck on the train for two hours after passengers saw a huge spark outside.

She said: ‘We thought it was lightning at first and then they said it was an electrical fault. The poor driver didn’t have any information so everyone had to find out what was going on on social media.

‘We were told it would be about 90 minutes but we ended up being stuck for about two hours with very little information, no food, water or heating so it wasn’t the best start to the day.’

She was just one of millions of people who travelled to the capital to witness the Queen’s historic state funeral today, resulting in one of the UK’s biggest transport operations as mourners descended on London and Windsor.

Up to two million mourners were expected to flock to London, Windsor and royal sites around the UK on the national bank holiday, with the service set to draw an estimated 4.1billion TV viewers across the globe.

Around 250 extra train services were planned.

They included a 3am departure from Penzance, Cornwall, for Paddington, which left with no passengers, according to news website CornwallLive.

The service only ran as far as Reading due to the damaged wires.

The sound of the choir at Westminster Abbey echoed through the carriages of delayed trains as many mourners watched the service on their smartphones this morning.

Bev Palfreman said she was ‘absolutely gutted’ to miss the start of the funeral.

The 61-year-old from Oakhampton, Devon, said: ‘The Queen has just been there throughout the whole of my life. This was the only thing I wanted to do.’

Gaby Thomas, 29, who travelled from Castle Cary, Somerset, with her father, said: ‘My dad is a former naval officer and he wanted to see the procession and the military involved.

‘It’s just about being there. We were meant to arrive in Paddington at about 8.30am. We are still hoping to catch the end of the procession.

Passengers on a GWR train were told by a member of staff using the public address system: ‘My sincerest apologies for the delays on such an important day for the country.’

A train that left Paddington at 6.25am was stuck outside the station for more than two and a half hours with passengers on board.

One passenger said it took them five and a half hours to reach Paddington from Castle Cary, instead of the scheduled one hour and 40 minutes.

A Network Rail spokesman said: ‘We are very sorry for the disruption which we expect to continue throughout the day.

‘We are working hard to get services running as soon as possible and passengers are strongly advised to check before they travel.

‘We will continue to update passengers as the situation develops.’

This afternoon railway bosses tried to avoid further travel chaos by asking mourners to head for a beer or a coffee after the funeral.

A post on the National Rail’s Twitter account read: ‘Cafes, pubs and other hospitality providers around London are expected to be open this afternoon, so please don’t rush home immediately following the state funeral and final procession so you can continue marking this historic day and help ease pressure on the rail network.’

National Highways lifted roadworks and suspended planned motorway closures across England today but many local roads were closed in central London, leading to bus diversions and no coach services to or from Victoria.

As early as 7.30am authorities were warning travellers that central London was extremely busy.

A statement said: ‘The areas in and around Buckingham Palace, Westminster, Whitehall, St James’ Park and Green Park are extremely busy.

‘If you are in the vicinity or arriving to watch Her Majesty The Queen’s State Funeral and procession, please be patient and follow the advice of stewards and police.’