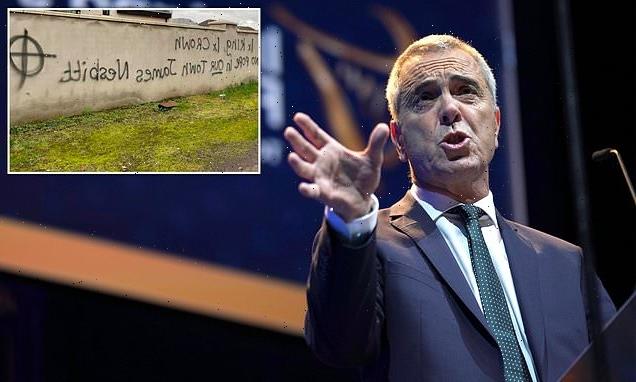 James Nesbitt is hit by ‘hate crime’ as he is threatened with ‘crosshairs’ Northern Ireland graffiti saying: ‘One king, one crown, no pope in our town’

James Nesbitt has been hit by ‘hate crime’ after he was threatened with ‘crosshairs’ Northern Ireland graffiti.

The message threatening the Cold Feet actor, 57, was daubed on a wall in the predominantly unionist town of Portrush in Co Antrim.

It appeared weeks after Nesbitt was the keynote speaker at an event in Dublin organised by a campaign group advocating for a united Ireland.

The Coleraine-born star, who is from a unionist background, previously told the Belfast Telegraph: ‘There needs to be change here, and that’s coming from someone who loves coming from here.’

A spokesman for the Police Service of Northern Ireland said: ‘Police in Coleraine received a report of graffiti on a wall in the Bushmills Road area of Portrush on Wednesday 19th October.

‘The graffiti is believed to have been written on the wall some time between 5pm on Tuesday and 7.30pm on Wednesday evening and is being treated as a hate crime.’

Officers have asked anyone with information to come forward. 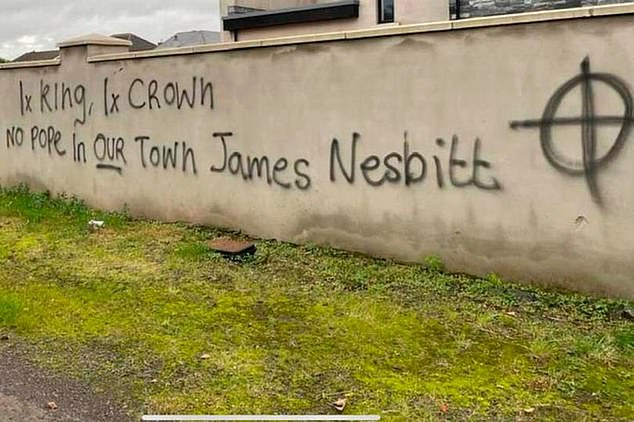 The message threatening the Cold Feet actor, 57, was daubed on a wall in the predominantly unionist town of Portrush in Co Antrim 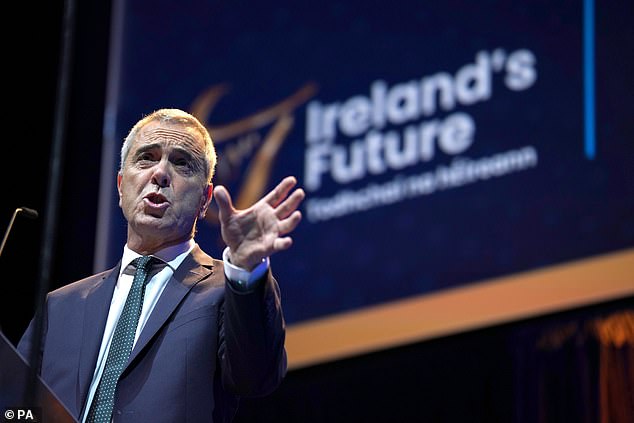 The graffiti has been condemned by local political representatives.

‘Jimmy Nesbitt is a local lad who has invested in his own community,’ said the DUP representative.

‘Those painting threatening graffiti such as this should stop. Their actions are wrong and to be condemned.

‘I fundamentally disagree with Mr Nesbitt’s position on Northern Ireland’s future but he has every right to express his political views in whatever forum he wishes. He should be able to do so free from fear.

‘That’s a democracy and it’s why I have opposed Sinn Féin all my life as they believed you could justify violence at the same time as doing politics.

‘We must be consistent in always opposing violence as well as any threat of violence and attempted intimidation.’ 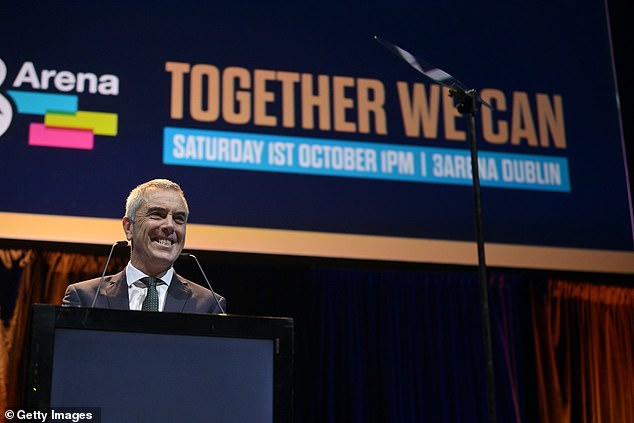 Nesbitt, who is from a Unionist Protestant background, speaks to the audience during the Ireland’s Future Together We Can conference which discussed planning for a united Ireland on October 1 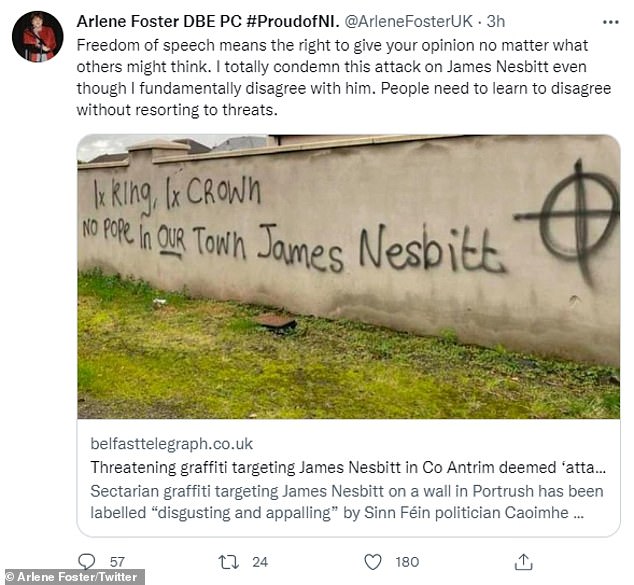 Officers have asked anyone with information to come forward. The graffiti has been condemned by local political representatives

‘The appearance of threatening and sectarian graffiti directed at James Nesbitt in Portrush is disgusting,’ she said.

‘These threats are an attack on the right to freedom of expression. They come only weeks after James Nesbitt addressed thousands of people in Dublin from right across the political spectrum to discuss the future of the island of Ireland.

‘This is clearly a sinister effort to silence debate and intimidate people from joining the discussion.

‘There is no place in society for the threats and hatred directed at James Nesbitt.

‘Political leaders should stand shoulder to shoulder in opposition to these threats.

‘Those responsible for this hate crime should be held to account.

‘Anyone with information on those responsible should bring it forward to the PSNI.’

Nesbitt has had a long association with Troubles victims’ organisation, the WAVE Trauma Centre.

A spokesman for the centre said: ‘As a patron of the WAVE Trauma Centre for over 20 years, Jimmy Nesbitt has been a true friend to victims and survivors right across Northern Ireland.

‘That speaks to his commitment to support those who have suffered so much during our violent past but yet are too often ignored.’