‘It was coming in the windows’: Burst water main floods Perth street, sinkhole forms under house

A burst water main in Perth’s southern suburbs has caused a column of water as high as residents’ roofs to rush through a Success street, partially sinking one house.

The incident occurred just after midnight on Wentworth Parade. 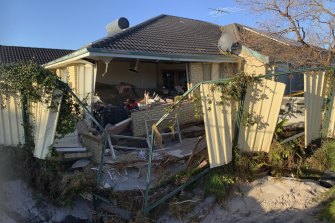 St John Ambulance paramedics treated an 80-year-old woman for shock after her home was crushed by the water wall.

Nine News Perth reporter Sarah Smith said the resident’s fence and roof collapsed, and a massive sinkhole had formed under her house.

“The neighbour on the other side of her has had a garden shed collapse. They said water was coming in through their windows and all their carpets and flooring is soaked,” she said.

“Other residents had to be evacuated. People said the water was up to their knees.

“The water has now subsided and the front of their homes look like sandpits.” 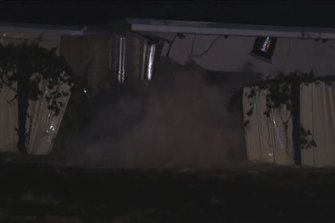 Emergency crews have commenced a massive clean-up, which is expected to take days.

One resident claimed they had recently raised an issue with Water Corp about the water main.