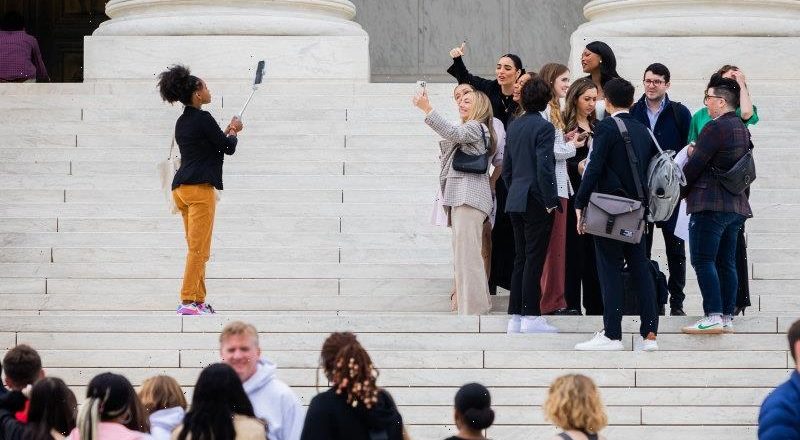 Inside the Biden and Democrats’ elaborate attempt to woo TikTok influencers

President Joe Biden spent more than an hour this week at the White House with eight TikTok stars with a combined following of more than 67 million who were brought to Washington in hopes that their posts will turn out votes for Democrats in the November 8 midterms.

In addition to the Oval Office meeting, the TikTok creators held a session with former president Barack Obama, toured the Supreme Court and the Capitol, and met with leaders of the Democratic National Committee and the Democratic Congressional Campaign Committee, the principal campaign arm for House Democrats. 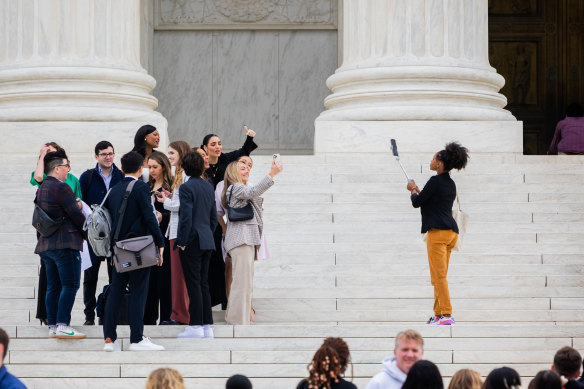 The trip, which was organised by the DNC, was the most visible effort to date of Democrats attempting to leverage TikTok’s vast audience to influence the midterms and is likely to prove controversial with Republicans, many of whom have been harshly critical of TikTok’s Chinese ownership. Former president Donald Trump at one point ordered TikTok to be shut down in the United States, then tried to force the sale of its US operations. Those efforts failed, however, though Republicans have continued to accuse the app of being a threat.

Since then, TikTok has been downloaded more than 100 million times by users in the United States, and it has surpassed Meta’s Facebook and Instagram to become the nation’s fastest-growing social media app.

“House Democrats are committed to reaching voters where they’re at and reminding them what’s at stake on November 8th,” said Cara Koontz, the DCCC’s digital communications director. “We’re thrilled to have their partnership in this first-of-its-kind effort for the DCCC.”

It remains to be seen how the creators will make use of the visit. Many had previously been largely apolitical, encouraging their fans to vote but not explicitly backing parties or candidates. For several, it was their first time in the nation’s capital and their first interaction with government. 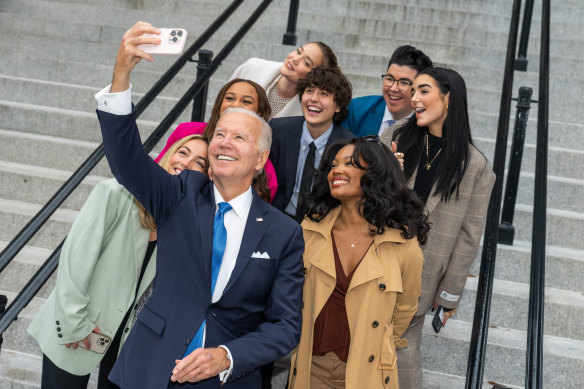 “I think they brought me in as a fairly independent, attempting to be a nonpartisan creator who did not vote for Obama,” said V Spehar, host of Under the Desk News, a TikTok news channel with 2.7 million followers.

It was clear during the visit that while their names and faces might be unknown to many in Washington political circles, that did not hold true for all. A kickoff dinner at We, The Pizza on Capitol Hill became so chaotic with swarms of young fans snapping photos and asking to take TikTok videos with the creators that the staff soon cleared an upstairs space so the stars could dine in peace.

The dinner conversation focused on issues like reproductive rights and strategizing how to best leverage their audiences for the midterms, several attendees said.

“We felt very excited, very optimistic,” Spehar said. “A lot of the creators talked about how they didn’t get a lot of civics education in school. They were excited to learn about the structure of government and see it in person.”

That lack of familiarity with government also apparently applied to their audiences. After the group solicited questions about the midterms on Instagram Stories, one influencer, Nia Sioux, 21, an actress and creator with 8.3 million followers on TikTok, realised her young followers were confused by references to midterms in her posts. They thought she was speaking about her UCLA midterm exams. She rephrased her posts to clarify she meant the midterm elections.

The trip was organised with the help of Daniel Daks, the founder of Palette, a talent management firm. The DNC contacted Daks because he had previously organised influencer efforts for the 2020 Biden campaign.

The DNC paid Palette a retainer, which was used to cover the creators’ travel costs and expenses, and is not compensating them directly for the videos they post. “Content creators have platforms that can reach millions, and we’re excited about this collaboration as part of our effort to reach young voters to remind them of the stakes in this election and how to make a plan to vote,” said Shelby Cole, deputy chief mobilisation officer at the DNC.

Their first stop Monday was to the Supreme Court. The group filmed content on the steps of the building and created videos reiterating the importance of the court in deciding issues like abortion rights and same-sex marriage. 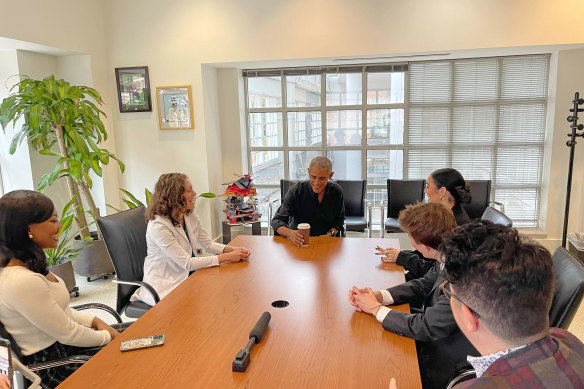 Then they met with Obama in his D.C. office. The former president spoke to them about the importance of these midterm elections, calling a Democratic victory in November crucial. Afterward, the creators filmed one-on-one TikTok videos with him.

DCCC leadership welcomed the creators to the organisation’s offices on Monday. The influencers held a meeting with high-level DCCC staffers who projected the midterm election battleground map on to a large screen and outlined key districts they hoped the TikTokers could help them sway. They also instructed the group on effective messaging strategies.

“To a group of people who consider a video that gets only 400,000 views a flop,” Daks said, “being told that many elections come down to fewer than 5,000 votes was eye opening.”

Mattie Westbrouck, 22, an online creator with more than 10.2 million followers on TikTok, said that it was their first time in D.C. and that the trip was a big learning experience. “The one takeaway was that the Michigan 3rd District was really important, because that’s where young voters matter the most,” Westbrouck said. “I’m going to try to promote content to reach those voters best.”

After a long Monday, the influencers dined with DNC staffers at Brasserie Liberté, a French restaurant in the city’s Georgetown neighbourhood.

On Tuesday, the group received a private tour of the Capitol. As they walked through the halls, a tour guide explained the branches of government and how the House and Senate operate. They saw the House chamber and Speaker Nancy Pelosi’s office, though the congresswoman was not there. At one point, a creator pointed out that there were images of corn etched into the columns right before the old Senate chamber and the group joked about the “it’s corn” TikTok meme.

“It was incredible to see the creators interpret the government through the lens of internet culture,” Daks said.

Next, it was off to the White House for a news conference where President Biden received a covid booster. The TikTokers had a brief encounter with the White House press corps, some of whom tried to sit in their seats.

“Nobody in our group was recognised by the press,” Spehar said. “After they tried to steal our seats, they didn’t have any other questions or curiosity about why we were there or who we were.” 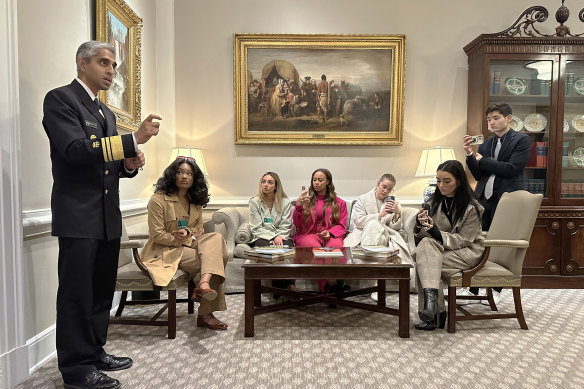 The trip to the White House was arranged directly, not through the DNC. Biden has embraced TikTok creators throughout his presidency, often hosting briefings with them on key issues such as the war in Ukraine and the coronavirus pandemic. After the news conference, Biden ushered the content creators into the Oval Office for an hour-long private meeting.

Creators said that during the meeting, Biden recounted his personal story and explained why he got into politics. He showed the creators’ family photos and asked if any of them would consider running for office. Some creators said it was something they’d consider. He personally walked them through the West Wing and encouraged them to get the coronavirus vaccine booster.

“It felt like a little room tour but by the president,” Westbrouck said.

“He didn’t mention the election or voting,” Spehar said.

“We know people listen to trusted messengers, and as an increasing number of young people turn to Instagram, TikTok and other platforms for news and information, we need to engage with the voices they trust directly,” said Rob Flaherty, the White House director of digital strategy.

Young people are increasingly getting their news and information from content creators on TikTok, surveys show. The percentage of people who consume news on TikTok has tripled since 2020, and over 26 per cent of adults under 30 regularly get news on TikTok, according to a recent survey by the Pew Research Centre.

The DNC opened a TikTok account in March, making it the only U.S. political party on the platform. The DNC employs a full-time content strategist dedicated solely to TikTok, building out the group’s platform through posting news clips, explainers and trending memes.

“In all my years in politics, I’ve never seen a single strategy that could flip a state on its own,” said Madeline V Twomey, founder of digital consulting firm Rufus and Mane who also worked to organise the trip. “TikTok is that strategy – it impacts culture and politics in a way that no other media reaches.”

“We’re seeing more politicians and the party establishment start to embrace this new medium and incredibly effective way of reaching young people,” said Aidan Kohn-Murphy, founder of Gen Z for Change, a group that was formerly known as TikTok for Biden. “We’re seeing a lot of campaigns and party organisations start to embrace the tactics that digital organisers have been saying work for years.”

In 2020, TikTok for Biden assembled a coalition of more than 500 TikTok creators to endorse Biden in his election campaign against Trump.

Creators invited on the trip said they felt more comfortable speaking about policies and candidates after their time in D.C. “I genuinely think it’s a scary time for people who can get pregnant and won’t be able to have rights to an abortion,” Sioux said. “I will be talking about my stance on that, and I will have more information in my social media content.”

Kat Wellington, 24, a lifestyle and fashion content creator, said she was previously hesitant to get political on her TikTok account, but that was likely to change after the DC. meetings. “I realised I want to share more about what I believe in,” she said. “This trip helped me make the push to use my platform for that. I don’t want to be afraid to share my genuine beliefs about politics, even if it’s going to upset some people.”