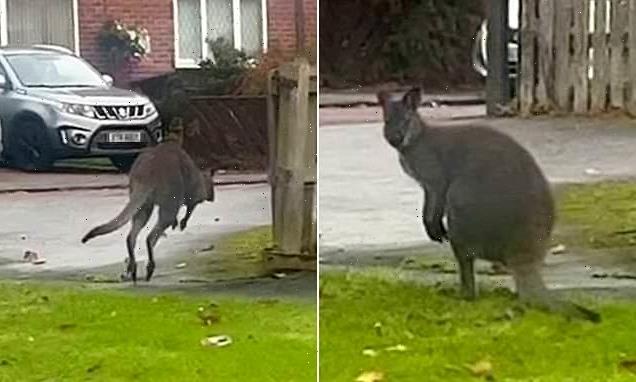 I walla be free! Wallaby spotted hopping down a residential street

I walla be free! Bizarre moment cheeky wallaby is spotted hopping down a residential street near Newcastle

This is the bizarre moment a wallaby was spotted hopping down a residential street leaving locals unable to believe their eyes.

The wallaby was filmed hopping behind a fence in Valley Dene, Chopwell, Gateshead in Tyne and Wear, after it was thought to have been on the loose for several days.

Cia said: ‘I was in car after getting ready for school and just looked out of the window and saw this wallaby.

‘I couldn’t believe my eyes.’ 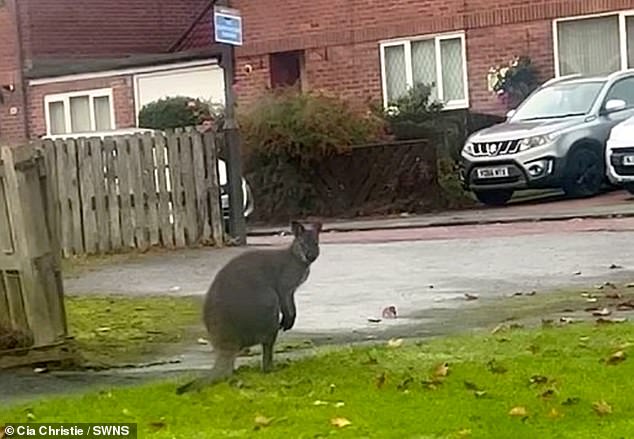 ‘I couldn’t believe my eyes’: The Aussie marsupial was filmed by schoolgirl Cia Christie, 13, after it appeared outside her home

‘I grabbed my phone and just started filming. It was hopping all over a grass verge outside the house.

‘It was quite big and then it jumped off behind a fence.’

Cia posted the video on Facebook and received a message from an animal welfare charity saying it had bounded into nearby Chopwell woods.

Cia’s mother Anna Gibson, 52, said: ‘We got a message saying it was last seen in the woods. We haven’t seen it since but we hope it’s alright.

‘We haven’t got a clue where it came from because there’s not any zoos or farm parks nearby so it could be someone’s pet which has got out.

‘It’s certainly not what you expect to see hopping down the street in Gateshead.’ 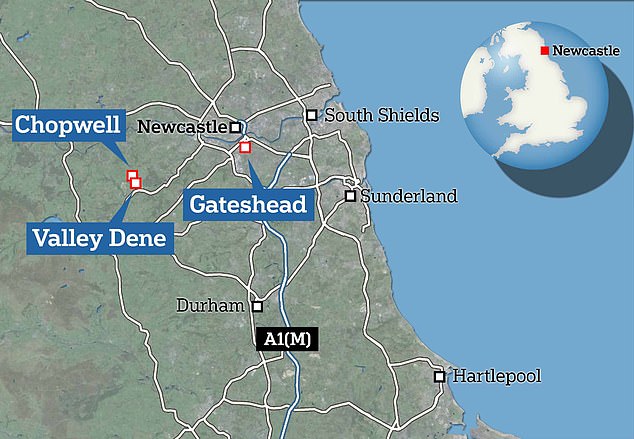 The wallaby seen in Valley Dene, Chopwell, Gateshead in Tyne and Wear, after it was thought to have been on the loose for several days

Neighbour Gareth Powell was also shocked when he saw the furry creature but grabbed his phone in time to capture the moment.

Mr Powell , 41, said: ‘We were just getting my daughter ready for nursery and my girlfriend went into the spare room and she shouted through to have a look out of the window.

‘I pulled up the blinds and there was a wallaby. I got my phone as I quick as I could and tried to film as much as I could.

‘Apparently it’s been on the loose for a few days and has been spotted down the woods at the bottom of the estate.

‘I then saw it again later on at the entrance to the estate, near the main road so hopefully it’s OK.

‘I had seen a picture of it previously but it it’s definitely the first time I’ve ever seen a Wallaby in Chopwell.’

Wallabies are native to Australia and New Guinea, but there are smaller populations found in New Zealand.

There have been recorded sightings in the UK in recent years which have confused locals who recognise they are a long way from home.

The cute creatures, which can grow up to around 40 inches tall, typically live on a diet of plants and fruit.

But despite their Australian heritage, wallabies are not a new addition to the British countryside.

Feral populations have existed in England and Scotland for years, including notable colonies in the Peak District, which was established after five escaped from a local zoo in 1940.

A large group on the island of Inchconnachan on Loch Lomond was deliberately introduced there in the 1920s.

One of the oldest and largest colonies is at Leonardslee Gardens in Horsham, West Sussex, where wallabies from Tasmania were introduced by naturalist Sir Edmund Loder in 1889.

Mr Powell, who works for Nestle, added: ‘I couldn’t quite believe that it was right outside of my house.

‘I really hope the wallaby is OK until it gets caught. ‘It seemed fine but we hope that it doesn’t go on the main road and cause any damage to itself or anyone else.’

Meanwhile another said: ‘Poor thing must be so confused.’

The RSPCA said they had not received any reports of a stray wallaby in the area but advised members of the public not to approach the animals.

A spokesperson said: ‘Most people may be unaware that wallabies are considered established in the wild in Britain, as a result of escaping from captivity, although they are not a native species to the UK.

‘Some people also keep them in private collections, so it’s possible this wallaby is lost or has escaped from a private property.

‘Our advice to people who spot a wallaby in the wild is to watch from afar and don’t try to approach them. Sightings should be reported to UK Wallaby Sightings, ukwallabies.weebly.com and iRecord for non-native species: irecord.org.uk/enter-non-native-records.

‘Anyone who finds a wallaby injured or in need of help should monitor the animal from a distance and call the RSPCA emergency line on 0300 1234 999.’