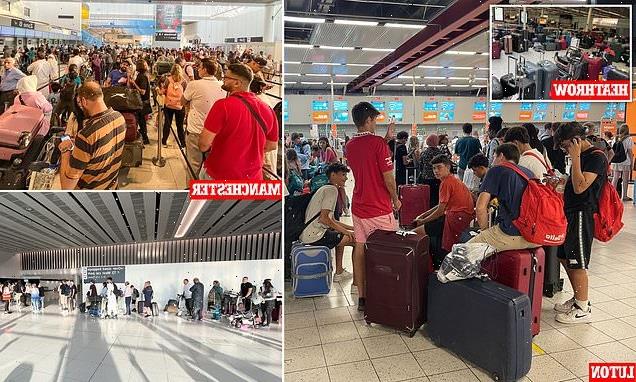 A furious blame game has broken out between Heathrow airport and a string of airline bosses over the chaos that has left much of Britain’s aviation sector paralysed.

The airport’s chairman Lord Deighton has rushed to chief executive John Holland-Kaye’s defence after airline chiefs blasted Heathrow for failing to prepare for the summer period.

Former British Airways chief executive Willie Walsh slammed the airport for imposing an unprecedented flight cap to limit queues, baggage delays and cancellations that will affect 100,000 holidaymakers a day until September, and even called for Mr Holland-Kaye to be fired if the chaos continues into next year.

But turning on Mr Walsh, Lord Deighton accused BA bosses of overseeing ‘decade of slashing’ before ‘being refashioned as a service organisation by its new team’. He also blamed the disruption on Covid-era mass layoffs and cuts to the wages of baggage handlers – who typically earn between £15,000 and £28,000 – imposed by airlines during the pandemic.

‘Airlines have driven down costs over the years, and this was one of the first costs they slashed during the pandemic. 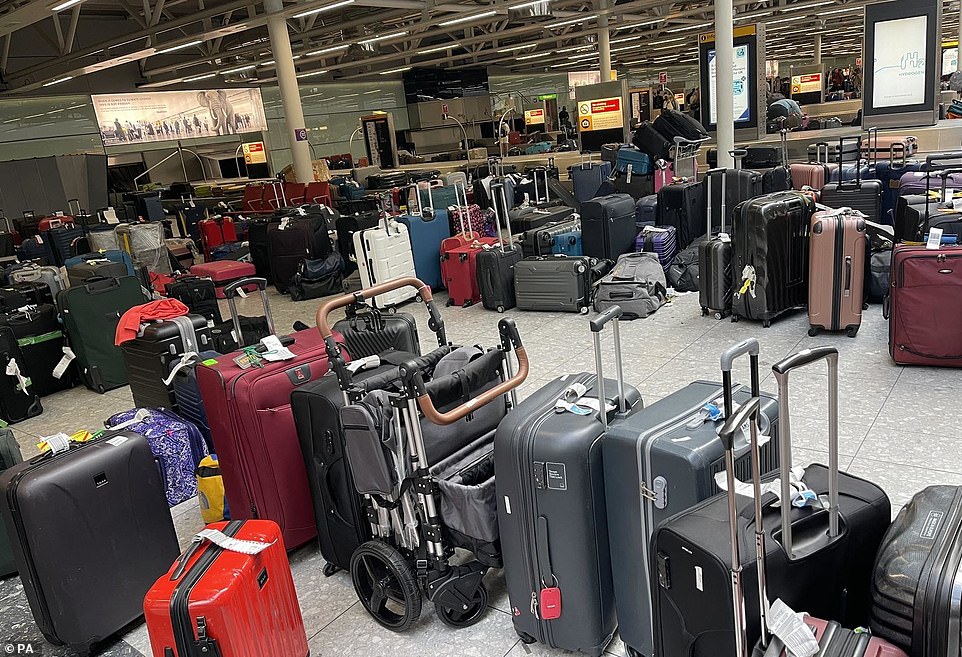 HEATHROW: Photo of left luggage at baggage reclaim in Heathrow Terminal 3 from earlier this month 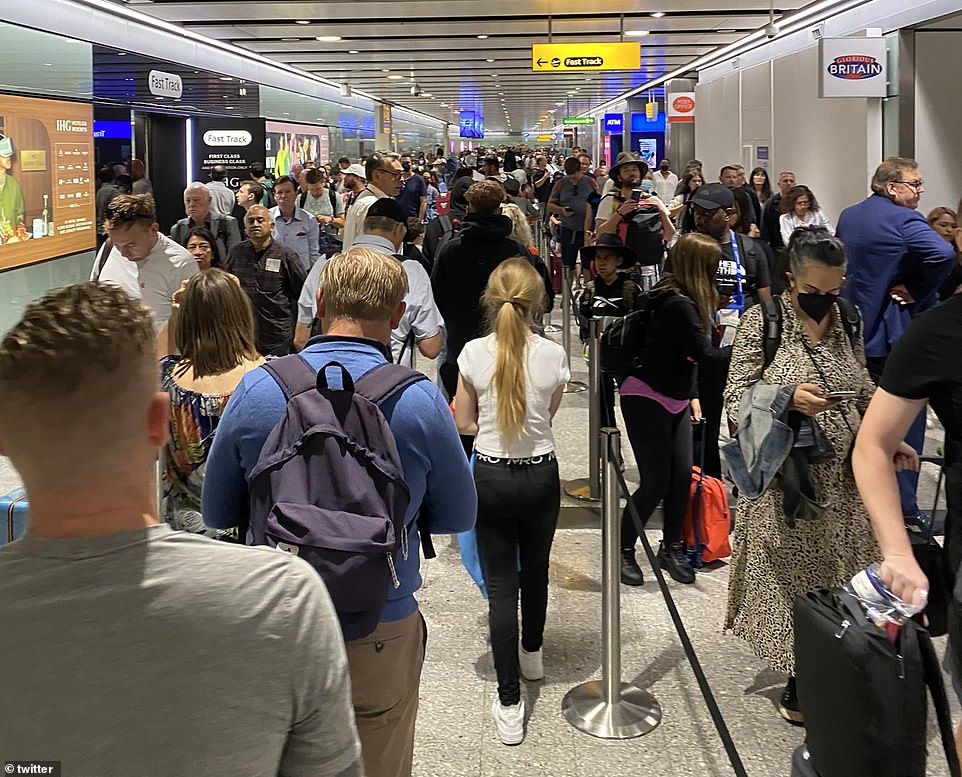 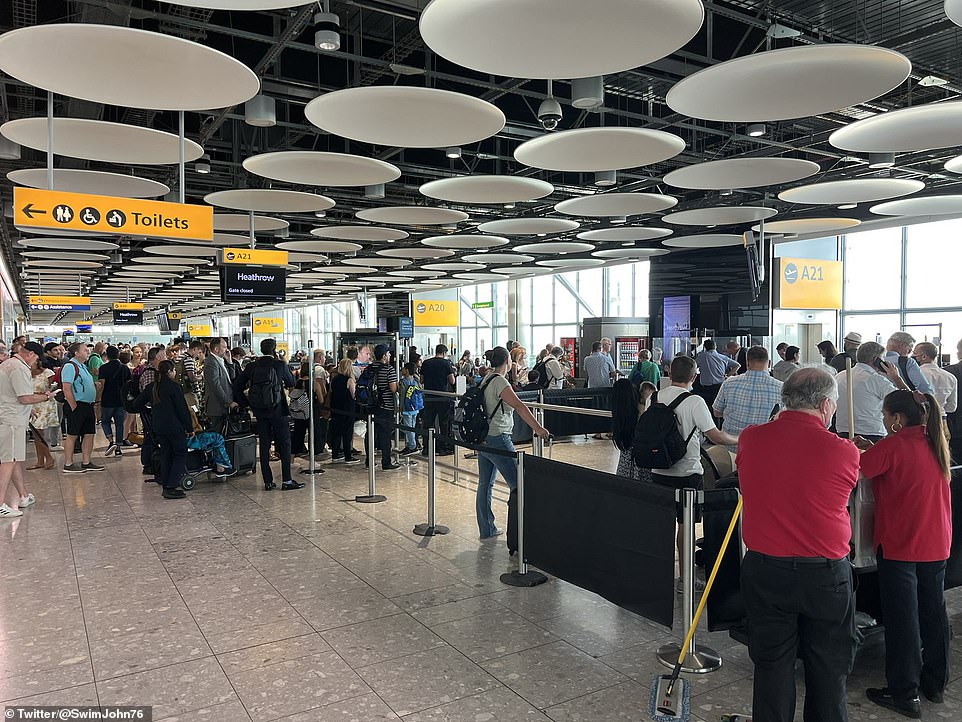 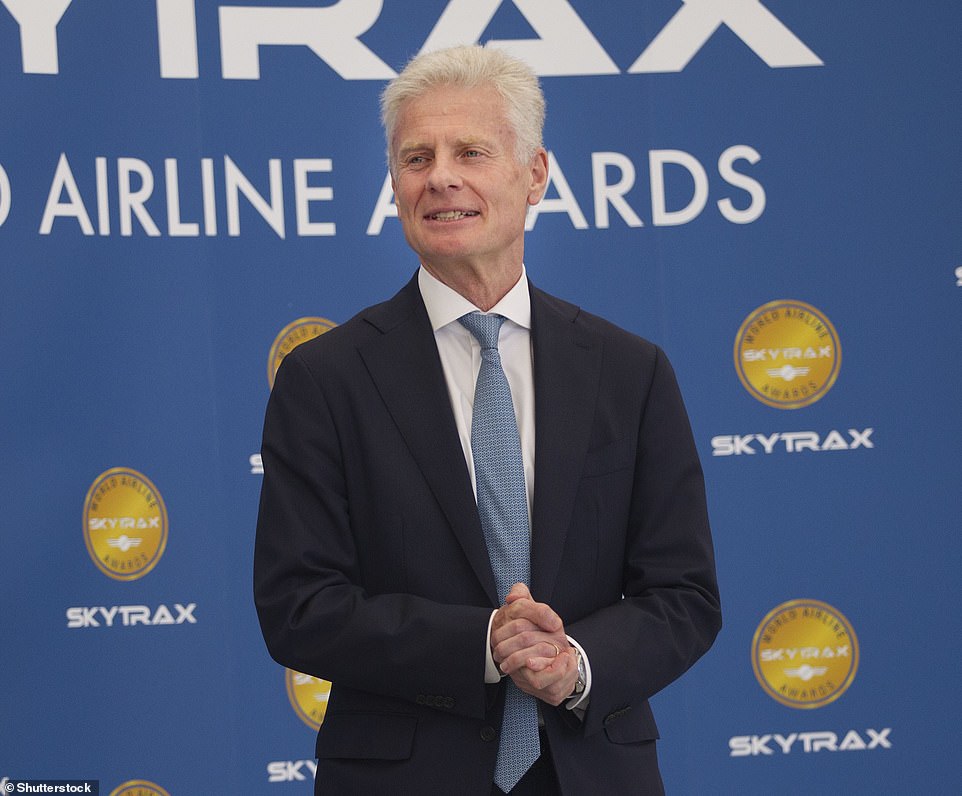 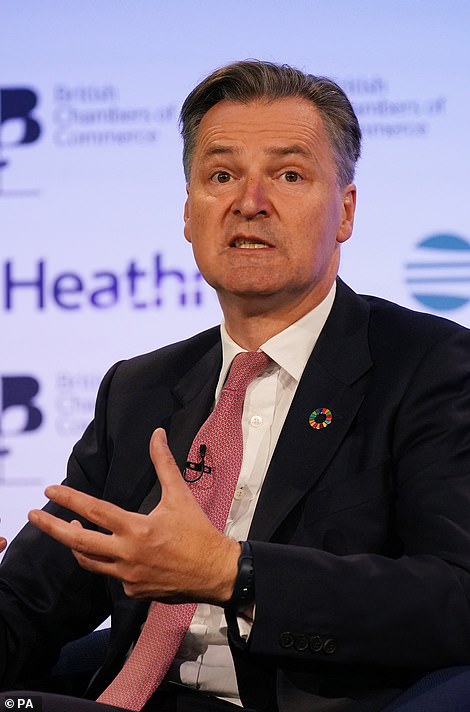 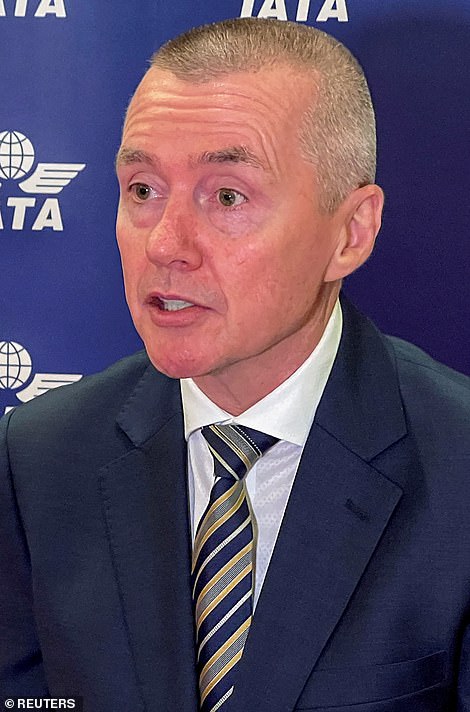 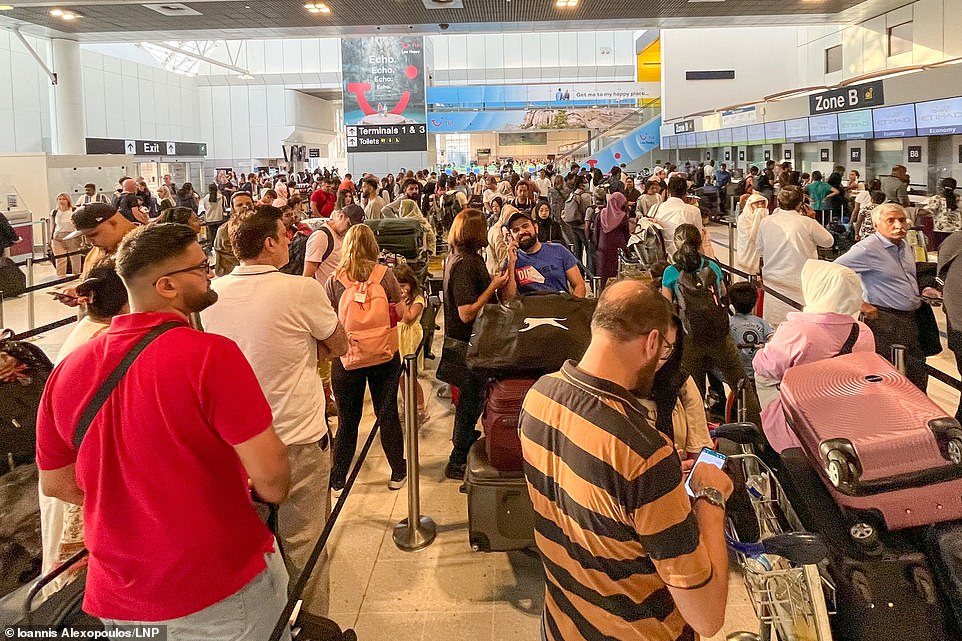 British people do not want to be baggage handlers, Ryanair boss Michael O’Leary has said amid staff shortages and planned strikes at Heathrow Airport.

The low budget airline has been ‘completely unaffected’ by airport chaos this summer which has seen others British airlines cancel thousands of flights due in part to staff shortages.

In contrast, Mr O’Leary said Ryanair was prepared for the return of pre-Covid levels of travel because it could see the ‘recovery coming’ and got its staff back to work early.

He also claimed unlike his competitors, his Irish company can take advantage of the European Labour market and not be faced with British workers who do not want to ‘pick fruit or work in hospitality, security and baggage handling at airports’.

He added: ‘I’m not re-campaigning on Brexit, but the UK is going to have to find a way to open up the Labour market between the UK and Europe, to get people in here to do the jobs which frankly British people don’t want to do.

‘For months ground handling companies have been trying to recruit and train skilled workers, but if their airline customers aren’t willing to pay market rates, then they aren’t able to fill the posts.’

He added: ‘For months we have been asking airlines to keep their ground handling resource in balance with demand. In the last few weeks, we have seen a shocking increase in planes departing without bags and passengers having their flights cancelled after they were already onboard.

‘That’s why we stepped in and implemented a cap on departing passengers – just like Amsterdam, Frankfurt, Gatwick and many other airports around the world.’

It comes as airport bosses ordered carriers to reduce capacity on individual flights as an alternative to cancelling them all together.

The plan was revealed at an online meeting between airlines and Heathrow executives on Thursday.

Heathrow is attempting to cap the number of passengers departing each day at 100,000 until September 11.

The cap was set earlier this week after a ‘slots amnesty’ did not result in the failed number of flight cancellations that Heathrow believed were necessary for passengers to avoid severe disruption.

A source with knowledge of the meeting told The Telegraph: ‘They are working on a plan for post-July 25 that involves seat caps. Rather than necessarily cancelling lots of flights, this will be capping the number of passengers on each flight.

‘They don’t know what the cap would be but in the past it has been around 75 per cent to 80 per cent capacity on each flight. In effect, passengers face being bumped off flights that do take off.’

Mr Holland-Kaye has come under pressure in recent weeks, with the Government giving him an ultimatum to reveal his plan to end the continuing travel chaos ruining holidays for British holidaymakers.

Department for Transport (DfT) and Civil Aviation Authority (CAA) chiefs wrote a joint letter to Mr Holland-Kaye urging he provide a ‘credible’ recovery plan to get the airport back to operating ‘reliably’ at a ‘stable level of capacity’.

They have also demanded to know why the airport believes a cap on daily departing passengers ‘provides a safe and resilient airport with a positive passenger experience’.

DfT’s director general for aviation Dr Rannia Leontaridi and the CAA’s chief executive Richard Moriarty penned a letter requesting Mr Holland-Kaye’s assessment of why the airport’s passenger cap will work – after criticism from airlines including Emirates and Virgin Atlantic.

In the joint letter, they also wrote: ‘We need you to develop a credible and resilient capacity recovery plan for the next six months, that provides comfort that Heathrow can operate reliably at a stable level of capacity.’

It has also emerged that the chief executive of Heathrow airport ignited warnings from airlines that the airport was underprepared for the expected summer holiday bookings surge.

Airlines reportedly told Mr Holland-Kaye at the end of last year they were ‘deeply concerned’ about the airport’s planning for the 2022 summer season, according to correspondence seen by The Telegraph. 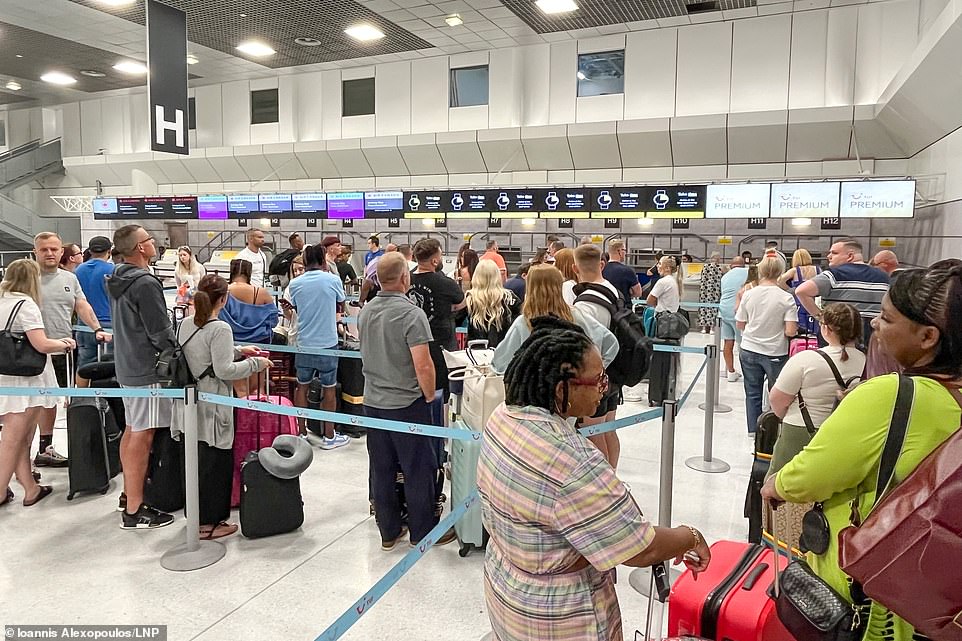 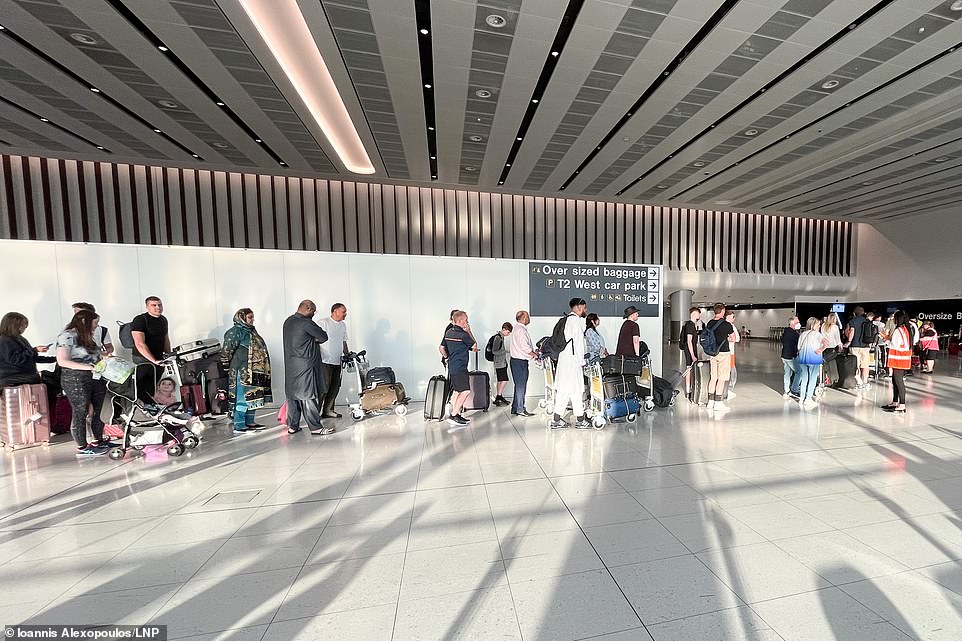 Why is Heathrow imposing a daily passenger cap?

Airlines were able to take advantage of a Government scheme which meant they could cancel summer flights without losing their future rights to the valuable take-off and landing slots.

But even with this measure, Heathrow believes airlines still planned to operate flights carrying 4,000 more daily passengers than could be processed in an acceptable manner.

Heathrow said: ‘On average only about 1,500 of these 4,000 daily seats have currently been sold to passengers, and so we are asking our airline partners to stop selling summer tickets to limit the impact on passengers.

‘We recognise that this will mean some summer journeys will either be moved to another day, another airport or be cancelled and we apologise to those whose travel plans are affected.

‘But this is the right thing to do to provide a better, more reliable journey and to keep everyone working at the airport safe.’

Heathrow insisted the capacity cap is ‘in line with limits implemented at other airports’.

It added that airlines have ‘discretion as to how they implement this in their individual schedules’.

He dismissed their concerns, telling them in response the suggestions that travel would surge from Covid-lows were ‘simply not credible’.

‘You undermine the credibility of your airline members by suggesting it,’ he said.

‘Staffing issues remain as all airport aviation workers need security clearance which currently takes between 3 to 6 months. In this time many applicants get jobs elsewhere.’

Asked what customers should do if they have their flights cancelled, he said:

‘Passengers who have flights cancelled are entitled to compensation, and a flight on another airline if possible They should keep in touch with their airline, holiday company and travel agent.’

Nicky Kelvin, Head of The Points Guy UK, added: ‘While the move to cap passenger numbers will no doubt be disruptive to many travellers looking to jet away over the coming months it is needed if we’re to see a shift away from the travel chaos of recent months.

‘The numbers currently suggest that Heathrow is already hitting capacity for the number of passengers it is able to currently cater for.

‘If you are still planning a getaway we’d advise you to plan your departure point accordingly, be flexible with dates if you can or consider other London or U.K. airports to star your journey.’

It came as an aviation boss suggested Brexit was partly to blame for travel chaos by keeping out foreign workers.

He added a recruitment crisis had been sparked by Brexit and aviation workers should now be added to the shortage occupation list to alleviate pressure.

Mr Joeinig wrote in The Times: ‘Brexit had a big negative impact, reducing the available pool of employees.

‘This was compounded during the pandemic, with the British aviation sector suffering huge job losses once furlough schemes ended before the easing of travel restrictions, and with many of these people lost to the industry.’

He also claimed ministers have failed to slash red tape sufficiently to speed up background checks on new recruits.

At present, employers must ask for references from each new recruit’s employer for the previous five years.

This can take several weeks if some previous employers drag out responding.

But Transport Secretary Grant Shapps changed the law last month to streamline the process. It allows employers to request details of each previous employer from HMRC.