Home » World News » ‘Get the idiots away’: Calls for exclusion zone around hospitals after protests

A senior doctor and the parent of a child undergoing cancer treatment have called for an exclusion zone around the Royal Children’s Hospital after anti-vaccination protesters blocked entry to the hospital.

About 200 demonstrators marched along Flemington Road in Parkville on Saturday and stopped outside the children’s hospital, as well as the Royal Women’s Hospital and the Royal Melbourne Hospital.

Video of Saturday’s protest outside the children’s hospital shows demonstrators chanting “the jab is not safe, the jab is not a vaccine, wake up Melbourne”.

Speeches occurred while ambulances with lights and sirens on entered the hospital. Police officers were lined up outside to try and keep the group at a distance from the entry.

Demonstrators carried signs with the phrases “keep your hands off our children” and “these bastards [MPs] are killing our lovely kids”.

Warracknabeal woman Karly Kirk was confronted by protesters when she returned to the hospital to visit her 11-year-old daughter Darcy, who is receiving chemotherapy after being diagnosed with lymphoma in June. 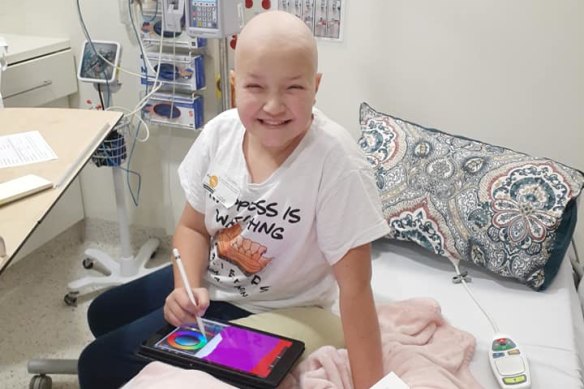 Darcy Kirk, 11, at the Royal Children’s Hospital during her third round of chemotherapy. Her mum Karly had to make her way through protesters on Saturday. Credit:Karly Kirk

Kirk said she felt “really vulnerable” as she was escorted through the demonstration by police. One screaming protester with a megaphone was within a metre of Kirk’s open car window. Kirk said other parents of sick children were locked out of the hospital due to security concerns.

She would now like an exclusion zone placed around the children’s hospital so that protesters are “set some boundaries” and parents of other sick kids aren’t exposed to the same stress she was.

“I hate that we have to legislate everything, but using the Royal Children’s Hospital as leverage in your political activism is not cool,” Kirk said.

“By the time I got through [the protesters], calmed down a bit and parked the car, I went from scared and anxious to really, really f—ing angry.

“There’s already so much going on, from remembering medications, to helping Darcy go the toilet, to [remembering] where we’ve packed the bloody car. The very last thing you need is to be worried that you’re potentially going to be assaulted or abused.”

In 2015, the Victorian parliament passed a law to create an exclusion zone of 150 metres around abortion clinics. It is illegal to impede roads or footpaths near abortion premises or engage in “harassing and intimidating” behaviour.

Senior emergency physician Dr Stephen Parnis said he would like to see a similar exclusion zone placed around all hospitals so they are off-limits to protesters.

Parnis, the former federal vice-president of the Australian Medical Association, said demonstrations such as the one on Saturday were “making a bad situation with unwell patients worse”. 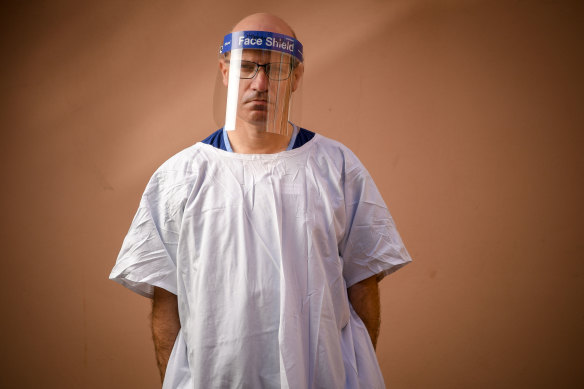 “Like any reasonable person, I think our right to protest and express our opinion is a very important right that must be protected. But there are places where it shouldn’t occur,” Parnis told ABC Radio’s Mornings program.

“I think there’s so many difficult, impossible things to fix for hospital overcrowding that this is one way of keeping flow happening that’s relatively easy: get the idiots away from places where we try and care for sick people.”

The Royal Children’s Hospital declined to comment about Saturday’s protest.

Victorian Minister for Medical Research Jaala Pulford spent a month “living on a couch” at the children’s hospital when her daughter Sinead fought cancer. The 13-year-old died from the illness in 2014.

Pulford urged the demonstrators to find “some skerrick of human decency” and not stage protests in places which affect struggling families.

“I think these people should have a good, hard think about what they’re doing to people going through incredibly challenging personal circumstances,” Pulford said.

She said the state government would take security advice from Victoria Police around the potential for an exclusion zone for hospitals.

Victoria Police did not comment on whether they would recommend an exclusion zone, but a spokeswoman said they are “extremely disappointed with the behaviour of the group targeting hospitals”.

Opposition police spokesman Brad Battin said the protest was an “absolute disgrace” but said exclusion zones on different premises would not fix the issue. He said laws allowing police to “move on” protesters should be reintroduced.