Home » World News » Gardener and son guilty of stealing £1.7m worth of antiques from widow 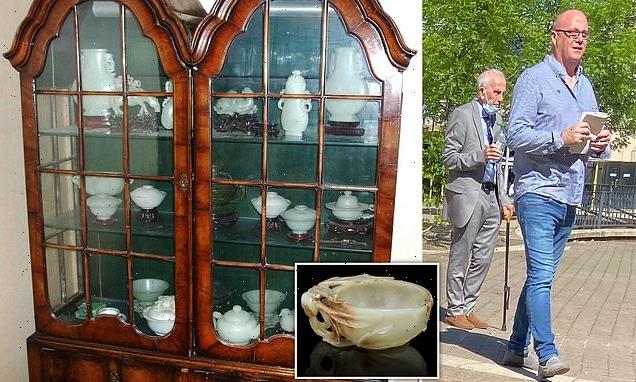 Gardener and son guilty of stealing £1.7m worth of antiques from widow

Gardener, 83, and his son are found guilty of stealing £1.7million worth of Chinese antiques from wealthy widow and auctioning them off at Bonhams 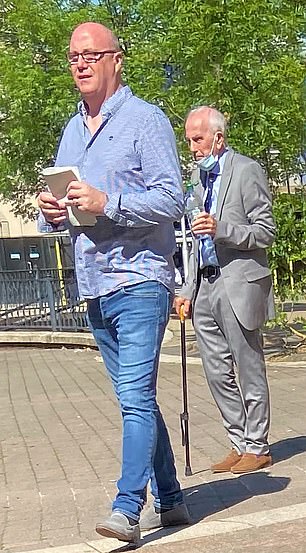 A father and son have been found guilty of stealing more than £1.7million worth of oriental antique jade ornaments from an elderly widow before auctioning them off at Bonhams.

For seven years Des Pickersgill, now 83, and son Gary, 42, plundered the collection of jade artefacts that she kept in unlocked display cabinets at her cottage in Bedfordshire.

The pair then tricked a London auction house into selling the items, some of which were hundreds of years old, by claiming they were theirs to sell.

The men were then assisted in selling the pieces by Gary’s wife Sarah and friends Kevin Wigmore and wife Tracy.

Yesterday, after a six week trial, all five were found guilty by a jury at Luton Crown Court of a string of offences relating to the thefts.

The five will be sentenced at a date to be fixed later this summer when reports for the judge have been prepared.

All five were granted bail but Judge Steven Evans told them: ‘I want you all to know, in particular those facing the more serious offences, that in adjourning for a pre-sentence report I am making no promises with regard to the sentences.

‘Just because I am granting you bail, I am giving no indication of what I am going to do in this case.’

During the trial the jury was told that the victim was an elderly, wealthy widow who lived in a small village near Bedford.

Her cottage home was filled with works of art including paintings, a work by Picasso, jade and ivory, books and heirlooms.

At one time Des, who was a neighbour, had been her gardener and, as a friendship developed between them over the years, he became a regular visitor to her home – often bringing with him a bottle of wine for them to share.

She had suffered a stroke and was looked after round the clock by carers after becoming increasingly frail and forgetful. 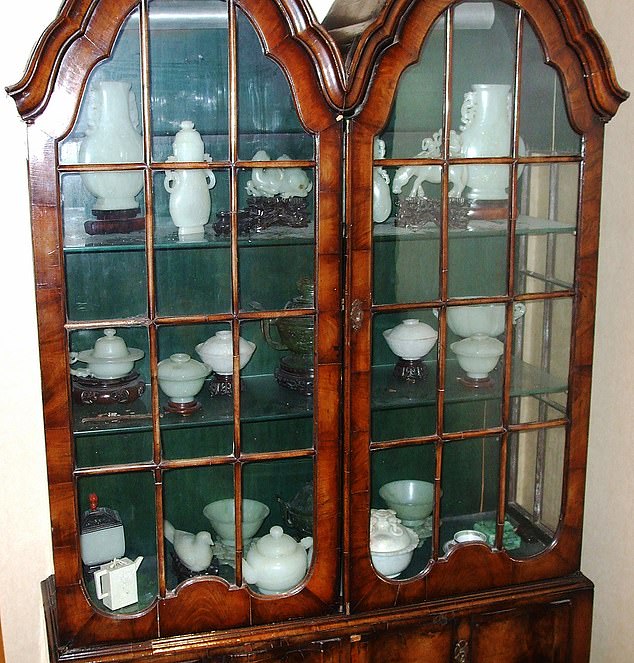 Unknown to the widow, now aged 96, Des was secretly helping himself to items from her jade and ivory collections of artefacts that had been built up over years and which filled her home in unlocked display cabinets.

Between November 2011 and May of 2018 he, together with son Gary who would do odd jobs for the widow, stole dozens of pieces from her home.

They each opened accounts with Bonhams Auction House in London and passed the stolen goods off as their own.

One such item sold by Gary was an apple green jade bowl.

Prosecutor Ian Hope told the court: ‘It went for a cool million pounds.’

The jury was told a pale green jade teapot sold for around five million Hong Kong dollars in 2015, which, he said, was worth over £500,000.

The father and son are thought to have taken items of jade and ivory worth a total of £1.72 million. 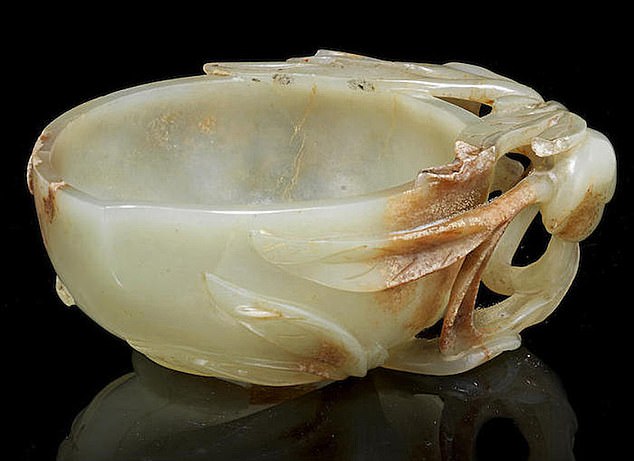 Pictured: Green and russet jade peach-form brush washer from the Qing Dynasty was sold at Bonhams for £4,200 by Kevin Wigmore and his wife on behalf of Gary Pickersgill 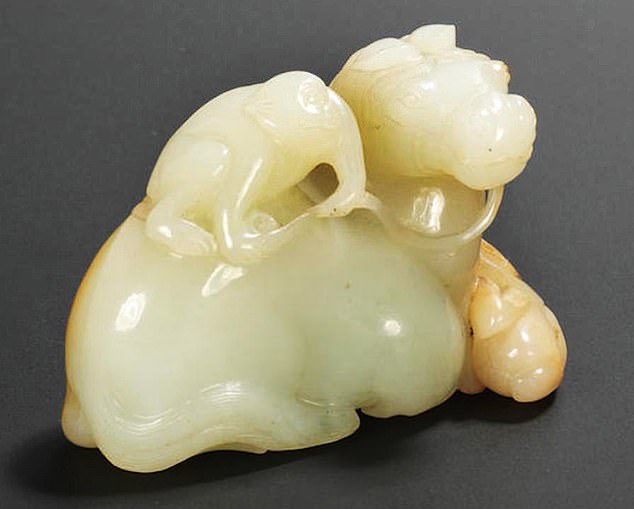 Pictured: White and russet jade carving of a horse and monkey was sold at Bonhams for £14,000

Mr Hope told the jury: ‘This case concerns the theft and fraud behind the sale of high value jade and ivory antiques taken from the home of an elderly widow. The crown say her collection was systematically raided by Des Pickersgill and his son Gary.’

The thefts came to light following a burglary at the woman’s home on the night of September 20, 2017 after thieves, who have never been caught, broke in through a stable door.

The widow, who was then in her early 90s, was in bed and her carers had popped out as items of jade and ivory were taken from the display cabinets during the raid.

Bedfordshire Police’s fraud investigation unit began an investigation and so too did her insurance company who appointed a fine arts and antiques valuer to see what had been taken and what it was worth.

Mary Griffith-Thompson, a fine arts and antique valuer, decided to go to the archives auction houses, Sotheby’s, Christie’s and Bonhams, to find similar pieces so that she could work out replacement values. 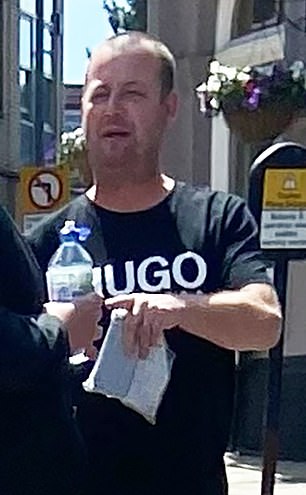 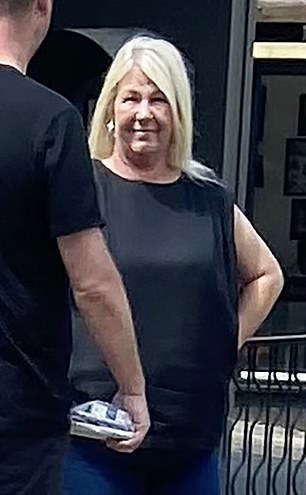 ‘Because it was the same teapot, she had stumbled on something of a mystery, because she was investigating a burglary in 2017 and she discovered the teapot had been sold years before the burglary took place in 2017,’ said the prosecutor.

As a result of her discovery, said the prosecutor, the expert compared other jade items pictured in the grandson’s photos with images from Bonhams archive of pieces they had sold in previous years.

She concluded that some of the missing items pictured in the display cabinets at the widow’s home had in fact been sold at auction by Bonhams in the years before the 2017 burglary.

The jury was told that over the seven-year period nearly 50 items were taken by the Pickersgills which included jade and ivory figures, animals, mythical creatures, oriental antiques, bowls, vases, carvings and a spittoon which was worth six figures. 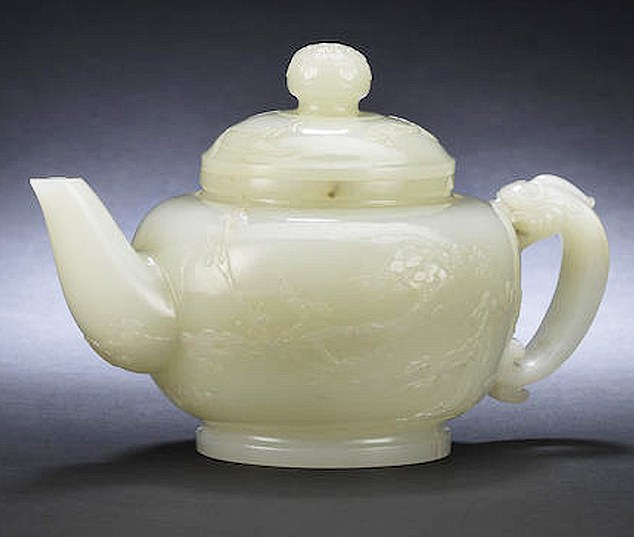 Pictured: Pale green jade teapot sold for around five million Hong Kong dollars in 2015 which prosecutor Ian Hope said was worth around £500,000 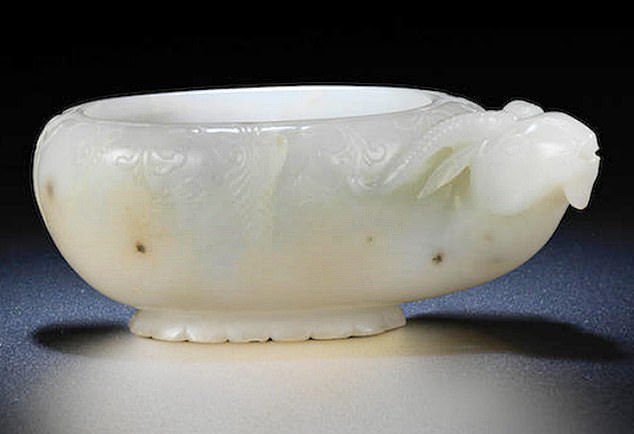 Pictured: White jade ram-head washer was sold for 550,000 Hong Kong dollars by Kevin Wigmore and his wife on behalf of Gary at Bonhams

Mr Hope said the fraud investigation unit established that items had been sold through accounts with Bonhams opened in the names of Des and Gary Pickersgill.

The trial was told it was not the prosecution’s case that any of the defendants were responsible for the 2017 burglary but it had revealed that someone had been taking antiques for years which had been sold in the name of Des and his son.

During the trial the court heard the thefts transformed the finances of Gary and his wife Sarah.

Having been on the verge of being evicted from a rented property in Bedford, the couple were able to buy a luxury house with a swimming pool, paddocks and one and a half acres of grounds in Spalding, Lincolnshire, for just over £410,000 in March 2014, which was mortgage free.

That house was sold in September 2017 and they used the proceeds to buy a hotel in Skegness, spending £100,000 on renovations, said Mr Hope.

The jury was told that in 2018 Gary had enlisted the help of his friends, Kevin and Tracy Wigmore, from Lincolnshire, to open an account at Bonhams and, through it, three items of jade were sold at auction for a total of more than £63,000. 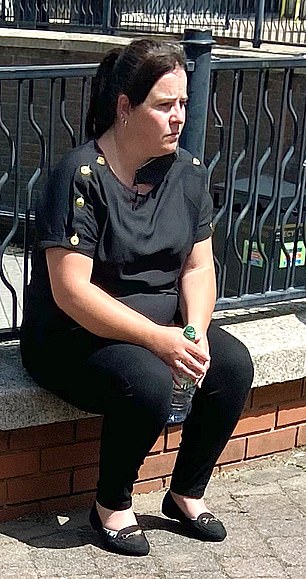 Kevin claimed in court that Gary had given him the pieces – a jade carving of a horse and monkey and two antique jade brush washers – back in 2011 as security for a loan.

He said he was eventually told by his friend he could keep the pieces as repayment and he sold them at the auction house.

Kevin said when the jade carving of the horse and monkey was sold at auction at Bonhams in May of 2018 he had been on a Mediterranean cruise with his wife and his parents.

He agreed that when he learnt of its sale for £14,000 in a series of the text conversations with Gary he had replied: ‘Happy days at sea.’

Giving evidence, Des said the widow was a very generous woman who would give him items of jade for jobs he did for her and which he sold later at Bonhams.

His son Gary said the woman had given him a box of items as payment for jobs he had done and it was only later after watching a TV programme that he realised they might be valuable and so he had sold them.

During the trial, the court heard the victim and her first husband had built up the collection of Chinese jade and ivory antiques.

In 1978 she had met another man while on a cruise and they eventually moved in together at the former farmhouse in Bedfordshire.

But he had died in 2000 and, following his death, she sold her own ‘unique and rare collection of books’ for over £4million at Christie’s.

Her farmer grandson told the court she had suffered a stroke in 2011 and her health had then declined.

He said while she had been in hospital recovering, he had photographed much of her collection of jade and Ivory because ‘of the way the world is and crime, and the house being empty’.

The court heard that following the burglary in 2017 all valuable property has been removed from the house and was now kept in secure storage.

Giving evidence, Ms Griffith-Thompson said that armed with the grandson’s photographs of the widow’s collection, she had visited the archives of auction houses to look for examples of what appeared to have been taken in the burglary.

Mr Hope asked: ‘Did anything catch your eye?’

Continuing her evidence, she told the jury the item was in the Bonhams archive as having been sold on June 4, 2015.

She said she closely studied the photo of the teapot in the archive, looking at the handle, the body and spout and then noticed there was a tiny flaw in the jade.

‘There was a flaw in the jade that matched a flaw that was visible on the teapot in the cabinet. Because jade is a natural substance, the chances of it occurring in the same place was remote,’ she said.

Ms Griffith-Thompson then told the jury the provenance details given in the archive for the teapot were unusual because they were very brief, describing it as: ‘Private English Collection.’

She said for a such ‘an important, rare and valuable’ piece she would have expected there to be much more detail about it to indicate the collection it had come from and if it had ever been in a museum.

‘The provenance with Chinese fine art adds to the value; provenance is kudos so it’s worth money,’ she said.

Fuller details would add to the sale price for the vendor and increase the percentage of the ‘hammer price’ for the auction house, she said.

She said she was able to compare other items pictured in the display cabinets and which was thought to have gone missing in the break in, with other pieces shown in the Bonhams archive.

They too, like the teapot, had unusually brief provenance details and had been sold at Bonhams before the 2017 burglary.

In court yesterday Des Pickersgill, 83, now of Bedford, and Gary Pickersgill, 42, of Skegness, were both found guilty of the theft of jade and ivory artefacts from the home of the old lady between November 2011 and May 2018.

The pair, along with Kevin Wigmore, 47, were convicted of fraud by making false representations to Bonhams Auction House that they had authority to sell the jade and ivory items on behalf of the woman

Des, Gary and Sarah Pickersgill, 40, were found guilty to converting criminal property by selling the items to the auction house.

Gary, Kevin and his wife Tracy were found guilty of converting criminal property by selling jade and ivory antiques to Bonhams.

They will all be sentenced at a later date after the preparation of pre-sentence reports.