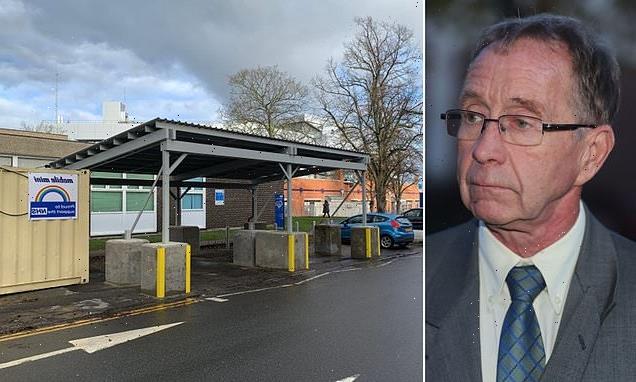 Ex-Tory mayor, 66, who told NHS nurse with terminal cancer that ‘I pay your wages’ before twice driving into her outside Covid test centre in furious row over parking space is fined £500

An ex-Tory mayor who told an NHS nurse with terminal cancer that ‘I pay your wages’ before twice driving into her outside a Covid test centre in a furious parking row, has been fined £500.

Vaughan Hewett was said to be ‘very angry’ that another vehicle had driven into a bay ahead of him, and aggressively told NHS worker Susan Dyett ‘I pay your wages’, it was claimed.

The 66-year-old, who was elected mayor of Medway Council in Kent in 2012, had taken his wife Jennifer to the ‘drive-thru’ testing centre in the grounds of Medway Maritime Hospital in Gillingham on the morning of April 16 last year.

It was alleged that following the retired geophysicist’s ‘aggressive and abusive’ outburst after a Mercedes car had pushed in front of his Skoda Yeti, he drove forward, striking Mrs Dyett while she was standing in front of his vehicle noting down his registration number.

Mrs Dyett had been diagnosed with terminal secondary breast cancer in her liver and bones and required proof of a negative result as she was due to start treatment with a new drug. 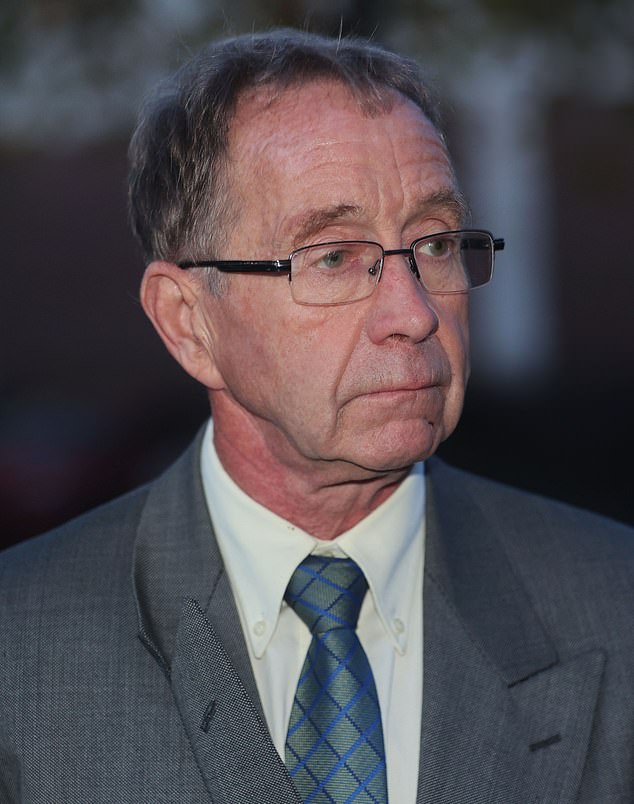 Vaughan Hewett was said to be ‘very angry’ that another vehicle had driven into a bay ahead of him, and aggressively told NHS worker Susan Dyett ‘I pay your wages’, it was claimed

Mrs Dyett, dressed in her blue scrubs, told Maidstone Crown Court, Kent, she felt her leg being hit around the hip area although suffered no injury as a result.

She told jurors that although she had been bending down to read the number plate, Hewett could clearly see her before he moved forward and deliberately hit her.

Hewett however maintained he had not shown any aggression and had simply been ‘seeking clarification’ when he had asked about the need to queue.

He said he raised his voice because he was wearing a Covid mask and his window was only lowered a few inches.

He also denied make any contact in his car with Mrs Dyett after she, he claimed, had ‘recklessly rushed’ in front of him.

He told the jury the ‘queue controller’ was putting on ‘a performance for a purpose’ and described her behaviour as being ‘like a pantomime’.

Hewett also claimed when giving evidence that he had been ‘attacked’ by Mrs Dyett when she rapped on his car window with a pen.

His wife told the court that Mrs Dyett had been ‘spoiling for a fight’, adding that although Hewett was ‘irritated’ the queue had been jumped, it was ‘not in his nature’ to be aggressive or swear.

He was found guilty of dangerous driving on a 10-2 majority verdict but cleared of the assault charge after the jury of seven men and five women deliberated for five-and-a-half hours.

The court heard that he had had a ‘distinguished’ professional career which had taken him around the world.

As well as being fined, Hewett was banned from driving for a year and ordered to pay £500 compensation to Mrs Dyett and £2,000 court costs, all to be paid within two months. 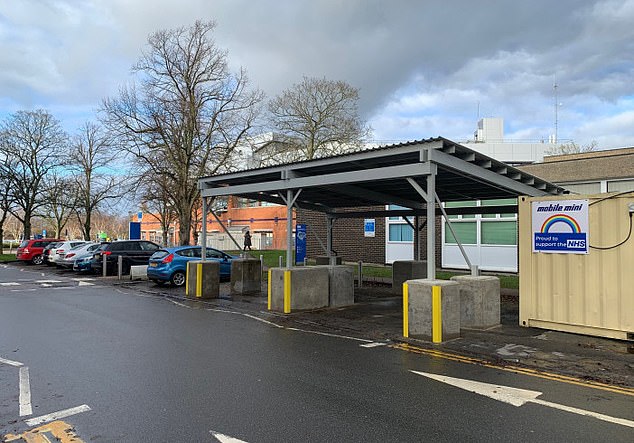 Passing sentence, Recorder Stuart Trimmer KC told him: ‘The jury has convicted you of dangerous driving on the basis you drove in a way that put at risk Mrs Dyett.

‘Driving in such a way where a human is in front of you is without doubt dangerous and to do that falls far short of what would be expected of a careful and competent driver.

At Hewett’s trial, prosecutor John FitzGerald told the court that the pensioner would have been understandably ‘stressed and anxious’ that day at the hospital, with his wife due to undergo vital cancer treatment in two days time.

He said it therefore ‘did not take much’ for the one-time mayor to behave ‘arrogantly, condescendingly, rudely and aggressively’, and then lose his temper and drive at Mrs Dyett.

After the verdicts, defence counsel Nicolas Robinson said Hewett was of previous ‘impeccable’ character, serving the community and carrying out charitable work.

Of the hospital incident, he told the court: ‘It was a moment’s inattention or a moment’s careless thinking not thinking and driving when the lady was in front of him.’

It was at about 9.40am when Mrs Dyett told the jury she heard a man shouting and ‘causing a scene’ as she came out of her office in the Covid testing area in the hospital grounds.

The court was told when she approached the Skoda, Hewett was angry and, with an abusive tone, asked her ‘Is this how you work now? People are allowed to jump the queue.’

Mrs Dyett said she assured him no one would be seen before his wife but he continued shouting. 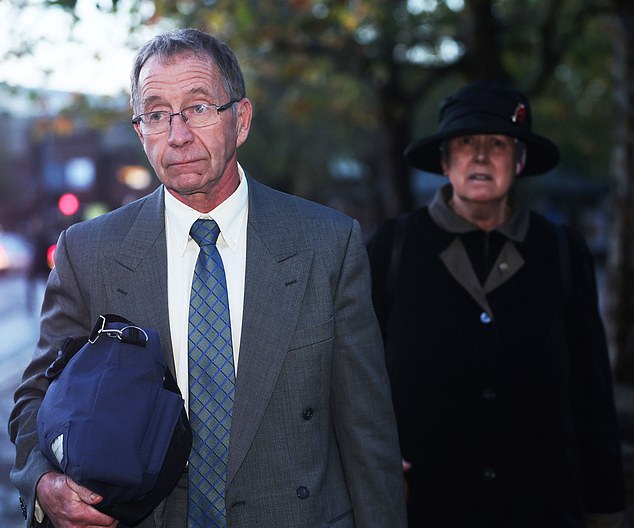 ‘He was still going on about how people had jumped the queue and then he told me he pays my wages,’ she told jurors as she gave evidence.

‘I was kind of taken aback and embarrassed he had come out with that because there were so many other people around.

‘You don’t expect people to be shouting they pay your wages because they haven’t been able to get into a bay before someone else.’

Mrs Dyett said his wife was asking him to calm down but he continued to be abusive.

Mrs Hewett was then asked to step out of the car so her swab test could be performed.

‘She told me I should have answered her husband quicker with the response I had given him that, I assume, no one would have been seen before her,’ added Mrs Dyett.

The court heard that when Hewett would not calm down, Mrs Dyett decided to alert security over the radio.

‘I was there as a professional just doing my job. I didn’t like the way he was acting and I did explain that was the reason I was calling security because no one should have to put up with that kind of aggression,’ she told the jury.

‘We are there to do a service and why should we put up with that? We are not there to take that abuse from people.’

However, Hewett was said to have ‘carried on shouting about people pushing in’ and would not speak to the two security officers when they arrived.

Mrs Dyett told the court she stood a couple of feet in front of the vehicle, wanting to take his registration number as ‘a precaution’ because she knew his wife, who by now had returned to the vehicle, was going to be a ‘regular customer’.

Describing the moment she alleged she had been hit, Mrs Dyett said: ‘I am crouching down to read the plate, not a full bend, and as I have looked up, he has looked at me and just driven and hit me with the car.

‘He clearly could see me, I could clearly see him. He hit me on my right hand side, on my hip or leg area. 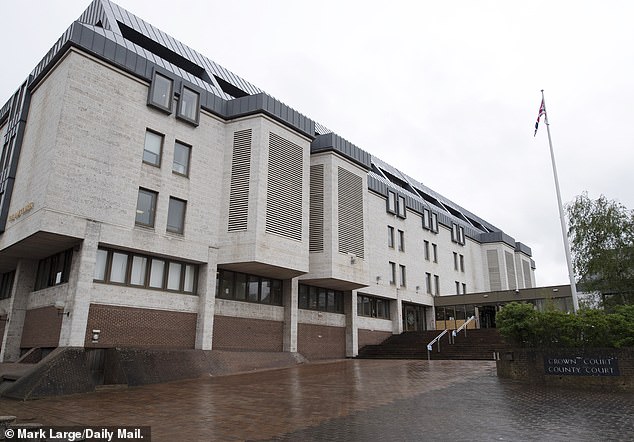 ‘We are there to do a service and the abuse he gave and the way he drove his car was just embarrassing, really embarrassing.

‘I moved out of the way so he could come out of the bay and he did, he just drove off.

‘He didn’t stop and ask if I was okay. He didn’t do anything. He just drove away.’

Mrs Dyett said she was hit twice – the first being the hardest and the second occurring ‘because I didn’t move out of the way quick enough’.

But she told the court she did not require any treatment.

She denied when cross-examined by defence barrister Nicolas Robinson that she had been ‘very worked up’ with Hewett and ‘lost all perspective’.

Security guard Jordan Brown said although Hewett’s window was partly lowered, he would not speak to him other than to raise his voice and shout ‘What you are doing is illegal’.

He told the court Mrs Dyett was directly in front of the Skoda when Hewett ‘rolled’ forward and hit her.

Mr Brown, who claimed his leg was also ‘clipped’ by the vehicle, added he then ordered everyone to let the car leave and that they would pass the information on to police.

Another hospital worker told police he had heard Hewett ‘shouting expletives’ and then ‘revving his engine’ as the car moved forwards.

Hewett, however, told the court that as he started moving, Mrs Dyett had ‘just appeared out of a crowd’ and ran in front of him.

‘She was shouting ‘Stop him! He is getting away’ and plonked herself in the middle of the road,’ he explained to the jury.

‘I put the brakes on. Mrs Dyett was standing in front of me and I could still see the bottom of her blue scrubs.

‘She started dancing around saying ‘Oh, you’ve hit me’…She made a pantomime of it.’

He maintained throughout his evidence in court that he had not been aggressive, and had asked ‘a straightforward question’ about the need to queue after his wife told him the Mercedes had pushed in.

He also denied making the remark about paying Mrs Dyett’s wages. He told jurors he had asked whether she was ‘NHS or voluntary worker’ and then told her that as she was ‘paid NHS’ he could report her for not managing the queue properly. 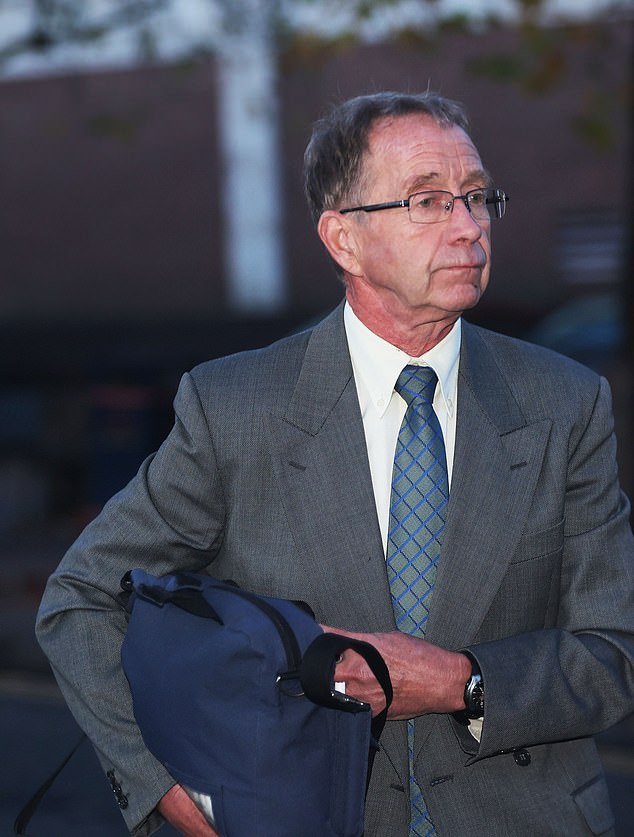 Asked to explain his ‘illegal’ comment to Mr Brown, Hewett said that they had been told to leave by Mrs Dyett’s supervisor and so he felt his wife was being denied her test and would not get her cancer medication.

He denied the prosecution’s suggestion he had sat in his car ‘stewing and frustrated’.

Asked by Mr FitzGerald for a reason why Mrs Dyett and her colleagues might be lying about his behaviour that day, Hewett replied: ‘Somebody who got up from a bad hair day, overheard my conversation with Jennifer and wanted to stir the hornets’ nest up.’

Hewett, who once described himself as ‘a modern Conservative’, served as a Tory councillor for Rainham North for seven years, before becoming an Independent Conservative in 2014 and then defecting to Ukip in 2015.

The court heard that as a result of the incident with Mrs Dyett he was banned from the hospital for a year.

Hewett said his wife, who he married in 2010, was able to start her cancer drug treatment but is now undergoing chemotherapy.

Giving evidence to the jury, she said her husband had raised his voice from their car because he was wearing a mask and spoke in a ‘strong, loud’ tone to ask about the need to queue.

‘Her body language to me indicated somebody who was grumpy, got out of bed the wrong side and was spoiling for a fight,’ Mrs Hewett told the jury.

She also maintained the car had not hit Mrs Dyett.

‘If he had hit her, he would have got out of the car to see that she was alright,’ said Mrs Hewett.

Asked how her husband had behaved that day, she added: ‘I would say he was behaving normally. He was a bit frustrated but nothing more than that.’