The event, which was held at function space NX – branded Newcastle’s ‘biggest fanzone’ – was described as an ‘absolute nightmare’ by one of the show’s presenters, and left ticketholders ‘disappointed’ and wanting a refund.

Video shows whoever was controlling the venue’s huge screen struggling to select the right channel to show the game, with a blank image throughout half time and for a large part of the second half.

Youtuber and fan Adam Pearson, from Wallsend in North Tyneside, described it as ‘the worst football experience I have ever had at any venue’.

The Newcastle United vlogger was invited to promote the event, but said he was unable to do so in good faith, adding he wanted to show his followers ‘exactly what went wrong’.

His vlog shows increasingly agitated fans breaking out into chants of ‘we want our money back’ as the screen was either appearing blank or showing the wrong channel.

At one point its operator appears to be flicking through channels on the TV guide, but instead of switching to ITV1, which was showing the game, they select Channel 4.

The frustrated crowd gets even more irate as C4 documentary The Scottish Island That Won The Lottery and a car advert come on-screen. 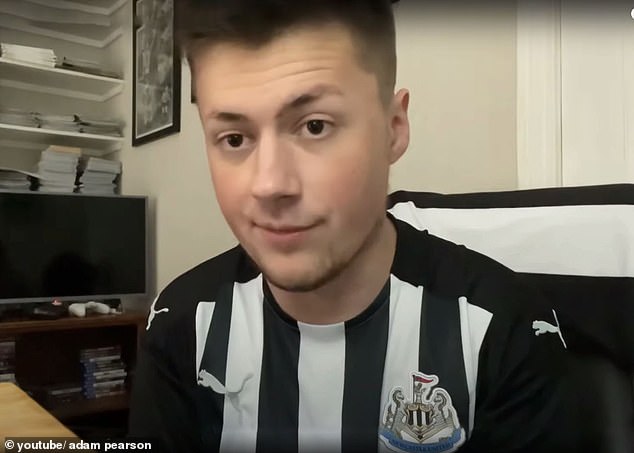 Newcastle United vlogger Adam Pearson was invited to promote the event, but said he was unable to do so in good faith 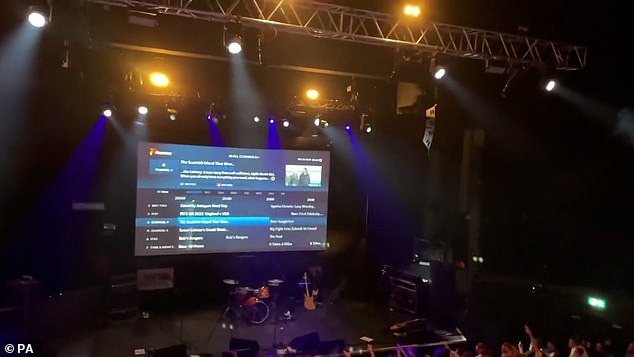 At one point its operator appears to be flicking through channels on the TV guide, but instead of switching to ITV1, which was showing the game, they select Channel 4 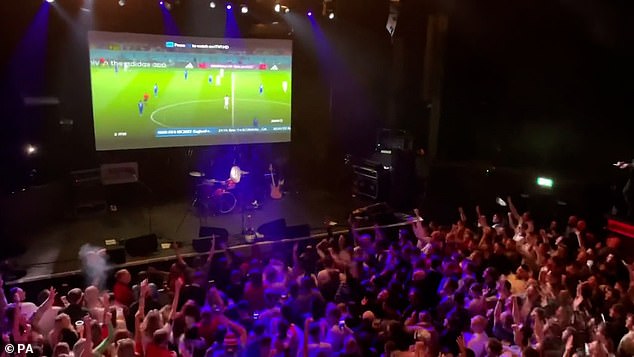 When the channel is eventually changed to show the game, jubilant fans threw their drinks in the air and cheered in celebration

‘The game’s on man. Why are we watching a car advert? Get the England match on!’ Adam can be heard shouting in frustration.

Increasingly rowdy fans begin to squabble, with one even seen jumping on stage to grab a replica World Cup trophy which is then passed around the crowd.

Adam said that as the chaos went on, the environment began to become ‘very toxic’.

Fans can be seen to be getting increasingly ‘angry and very frustrated’, ‘with incidents between a bouncer and fans causing trouble’, Adam said.

When the channel is eventually changed to show the game, jubilant fans threw their drinks in the air and cheered in celebration.

Luckily the crowd did not miss out on much action, with many labelling yesterday’s game, which ended with a 0-0 draw, ‘the most boring’ of the World Cup so far and ‘anti-climactic’.

Despite the chaos, Adam said that he intends to return to the venue on Tuesday for the England v Wales match, when he hopes to show his followers ‘how good [the NX] can be’. 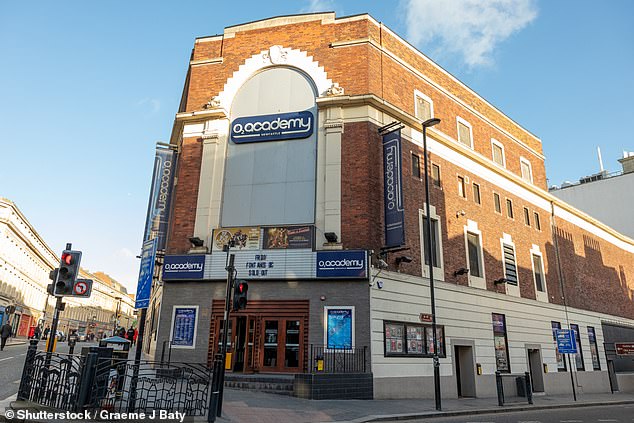 Tickets to attend the fanzone event are reported to have cost between £10 and £15.

In a statement today, the venue said: ‘NX would like to apologise to all fans who had such a disappointing experience.

‘We would like to add that the event was not promoted by NX but by a promoter, Box to Box, with a long-standing track record of delivering sports events in the city.

‘Given that NX is a brand-new venue for the City, we are entirely focused on making sure that the fan experience is front and centre of what we do.

‘We have now fully investigated the cause of the technical issues and we are fully confident that there will be no repeat of these technical problems at any future event promoted by Box to Box and hosted at NX.

‘We will provide an update regarding ticket refunds for this event shortly.

‘We can confirm that Box to Box will be proceeding with their next Fan-Zone event on 29th November.’