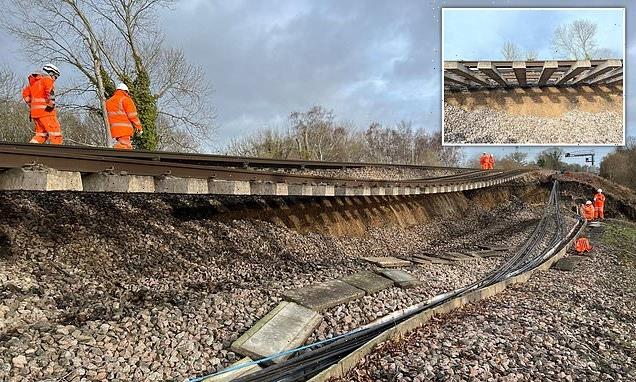 Disruption on railway from London to Basingstoke as line collapsed

A major railway line is expected to face major disruptions for a week after a ‘huge’ landslip left one track hanging in mid-air.

The 44-metre landslip took place on the embankment to the north east of Hook station in Hampshire, on the line from London to Basingstoke.

Its damage has left only two of the four tracks passable, with both of these designed for London-bound trains only.

South Western Railway (SWR) is now advising customers to check before they travel and to plan alternative transport for journeys to or from the south or west of Basingstoke to London in the coming days. 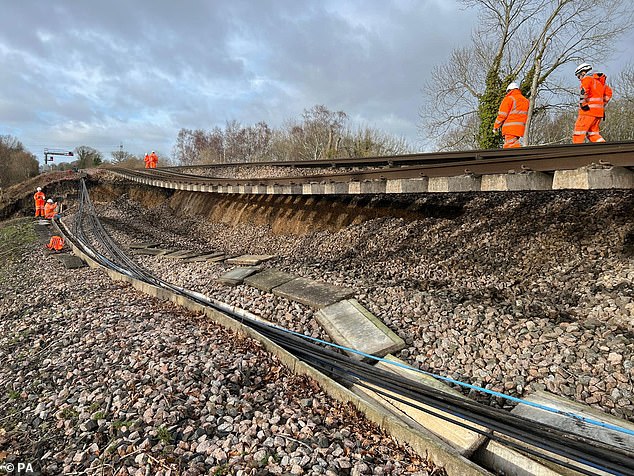 A 44-metre landslip occurred on an embankment to the north east of Hook station, Hampshire

As of 8pm this evening, SWR stated online that it could not serve Hook, Winchfield or Fleet stations until further notice.

In addition to London and Basingstoke passengers, those travelling on services between Bournemouth, Southampton, Weymouth, Salisbury, and Exeter, were advised against ‘all but essential travel’.

While other SWR services are currently operating as usual, it was said these may be busier than usual due to the incident.

Some disruption is expected to last for a week until the end of the day on January 22, according to the SWR website.

Network Rail Wessex route director Mark Killick said: ‘This is a huge landslip and will have a massive effect on customers. The main line to Basingstoke is the spine of our railway and there will be knock-on impacts across the route.

‘I can only apologise for the scale of the disruption and please ask that customers check before they travel this week, not just on the affected section, but all the way up the line to London Waterloo, where many of the trains that would use this section of railway start and finish their journeys.

‘We’re still assessing the damage and it’s difficult to put a detailed timescale in place, but we know it’s going to be at least a week. 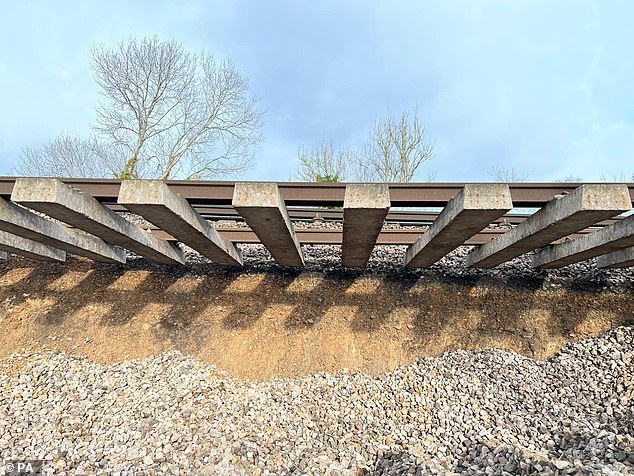 Disruption is expected to last for a week until the end of the day on January 22nd, according to the South Western Railway website. Some stations cannot be served until further notice

‘We will need to stabilise the embankment, essentially stopping it moving, and then rebuild the railway where it has slid away.

‘We’ll keep everyone informed of our progress and I can only say thank you to everyone for their patience and apologise again for the disruption. Please look out for further updates from South Western Railway on the revised timetable, once this has been able to be confirmed.’

A Network Rail spokesman explained that the embankment was made of a mixture of London clay and other local soils which had become saturated after days of heavy rain.

He said: ‘The slip happened when the soil gave way along a 44-metre section of 10m-high embankment, sliding out from underneath the tracks, in what engineers call a “rotational failure”.

‘Network Rail and its suppliers are working on designs for the work needed to repair the railway, which will give a clearer idea of timescales.

‘In addition, a train plan to provide journey options for customers on the route will be published as soon as possible.’