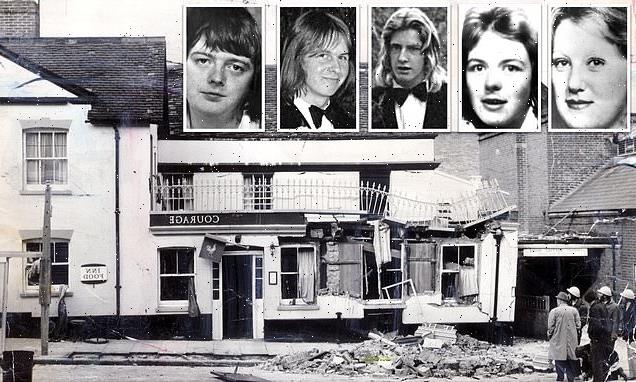 Mystery ‘courting couple’ planted the IRA time bomb as powerful as 18 stocks of dynamite that killed five in Guildford pub in 1974, coroner rules

The victims of the Guildford pub bombings carried out by the IRA nearly 48 years ago were unlawfully killed by a powerful time bomb planted by a ‘courting couple’, a coroner has ruled.

Soldiers Caroline Slater, 18, William Forsyth, 18, John Hunter, 17, and Ann Hamilton, 19, and civilian Paul Craig, 21, died and 65 were injured in the blast – carried out by the terrorists during the height of the Northern Ireland Troubles – at the Horse and Groom pub in the Surrey town on October 5, 1974.

The bomb which went off at around 8.50pm was equivalent to 18 sticks of dynamite, and is likely to have been placed in the pub by a man and woman, Surrey Coroner’s Court heard on Thursday.

Coroner Richard Travers, concluding the inquest, said: ‘The bomb contained approximately four-and-a-half kilograms of nitroglycerine-based high explosive and had been planted under a bench seat in the public house some time after it opened at 5.30pm that evening.

‘None of them was targeted personally, rather the public house and the area in which they were sitting were targeted because they were popular, and crowded, with military personnel.

‘I pass on my very sincere condolences to the families and friends of all those who died as a result of this appalling act of terrorism.’ 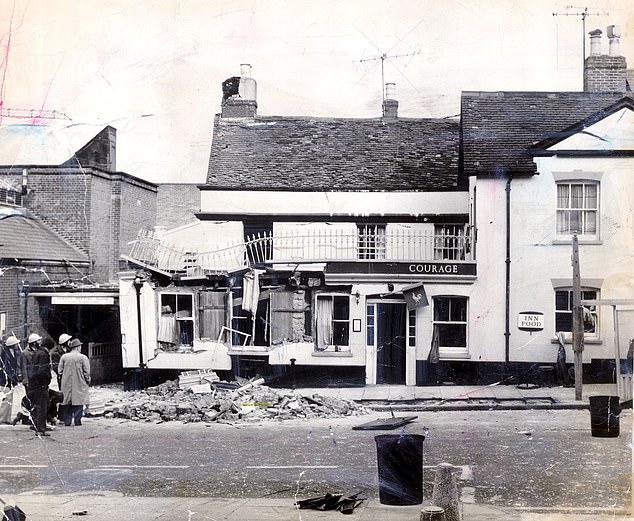 The court heard the four military victims were new recruits who had been enjoying their first Saturday night off to socialise, while Mr Craig was a friend of someone at the pub.

There were around 120 people at the pub when the ‘violent, intense and devastating’ explosion occurred.

Mr Travers went on: ‘There was a loud bang and bright flash emanating from the main alcove, followed by darkness, dust, panic, chaos and confusion.

‘A number of witnesses in the main alcove also described a feeling of electrocution which could not have been caused by the blast and which I find was likely to have been the result of live electricity cables falling down from the ceiling.

‘It must have been terrifying.’

He went on to say the device was detonated by an ‘electrically-initiated firing circuit’, and was a time bomb which had been ticking quietly. 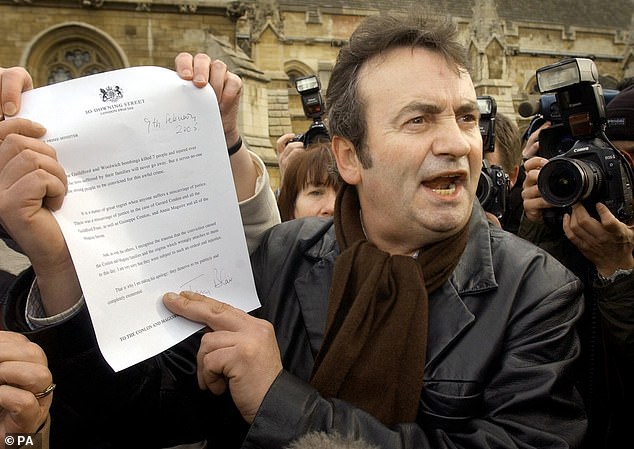 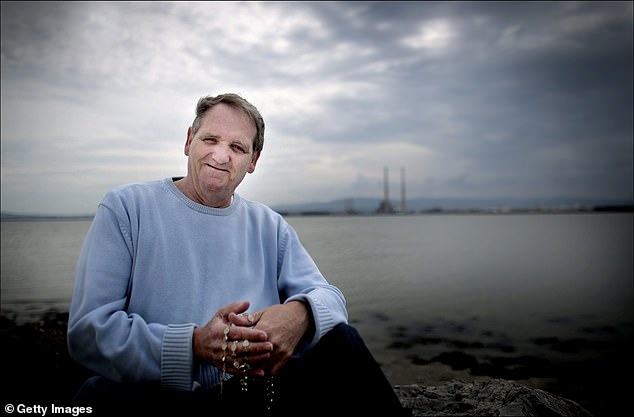 Patrick ‘Paddy’ Armstrong, a member of the Guildford Four, Dublin, June 2014. The Guildford Four were convicted in English courts in 1975 of bombings carried out by the Provisional IRA. Their convictions were quashed in 1989 after they had spent 15 years in prison.

He said the bomb would have been an ‘immense, unstoppable force’ and ‘extremely traumatic and disorientating’.

It caused a wall and fireplace to be blown into another room, obliterating parts of the building and causing the victims to fall through to the cellar.

Mr Travers said: ‘I am satisfied from the totality of the evidence that the bomb was probably planted by a young man a woman often referred to as a ‘courting couple’.

‘This couple were seen in the main alcove on the bench seat above where the bomb was planted.’

The inquest did not have the scope to explore who was responsible for the bomb, the composition of the explosive device or any claims that police lied during the trial of the Guildford Four.

Retired police officer Robin Young said in evidence earlier this month a ‘huge bang’ was followed by ‘utter confusion and mass hysteria’ after the first of two bombs. 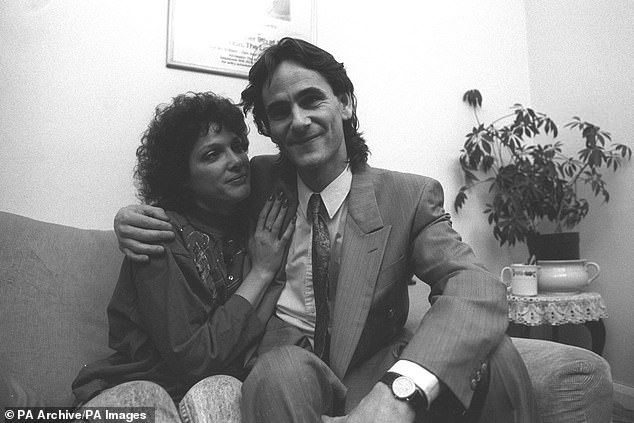 Paul Hill, one of the Guildford Four, reunited with his American wife, Marion, for the first time since he was freed from prison 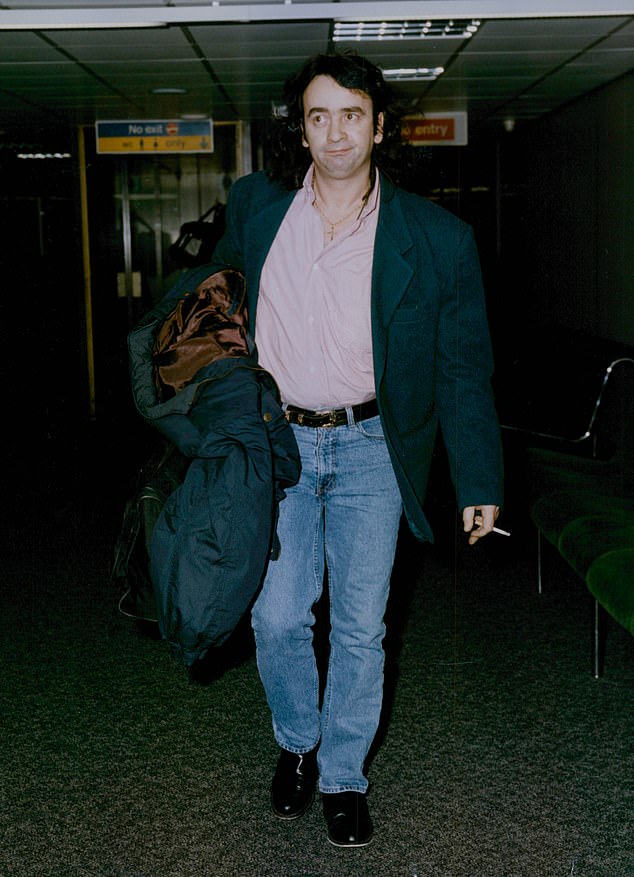 Gerry Conlon, one of the Guildford Four accused of the 1974 IRA Guildford pub bombing. Conlon served 15 years in prison after being wrongly convicted of being a Provisional IRA bomber

He said he could see ‘bodies, a lot of debris and mess’ in the crater, with some victims ‘alive, screaming and shouting’ inside.

Retired ambulance driver attendant William Edwards, of The Shoe, a hamlet in Wiltshire, recalled treating one burns victim, adding: ‘It looked like his clothes had just been blasted off.’

It was also described as a ‘bloodbath and utter chaos’.

Eleven people, the Guildford Four and Maguire Seven, were found guilty over the atrocity but their convictions were later quashed.

The incident and its aftermath inspired the 1993 film In The Name Of The Father, starring Oscar-winning actor Daniel Day-Lewis.

In 1976, IRA members Brendan Dowd and Martin Joseph O’Connell admitted carrying out the bombings but were never charged as both had been imprisoned in the 1970s for other offences and freed during the Northern Ireland peace process.

Mr Travers added: ‘I find that there was nothing specific about the date of the attack or the choice of the pub which could have made the bombings reasonably foreseeable or preventable.’

Wrongly convicted of an IRA attack: The Guildford Four

Eleven people, the Guildford Four and Maguire Seven, were found guilty over the atrocity but their convictions were later quashed.

Gerry Conlon, Paul Hill, Carole Richardson and Paddy Armstrong served 14 years of a life sentence after they were wrongly convicted of the 1974 Guildford pub bombings.

They had been sentenced at the Old Bailey after being found guilty over the deadly IRA attack on the Horse and Groom pub.

The attack, and others in Woolwich and Birmingham, would become better known for the huge miscarriages of justices they led to in the aftermath, with the public demanding the perpetrators be brought to justice. 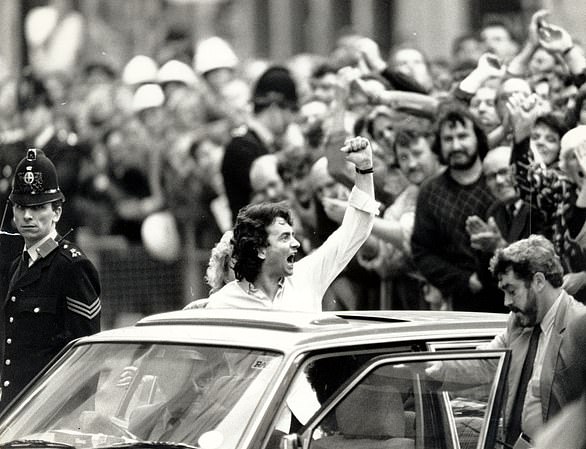 In October 1989 the Court of Appeal quashed the sentences of the Guildford Four after they had served 14 years behind bars, amid doubts raised about the police evidence against them. An investigation into the case by Avon and Somerset Police found serious flaws in the way Surrey Police handled the case. Emerging from the Court of Appeal a free man (above), Mr Conlon declared: ‘I have been in prison for something I did not do. I am totally innocent’

Mr Conlon, Mr Armstrong, Mr Hill and Ms Richardson were jailed in 1975 for the Guildford bombing, while Mr Hill and Mr Armstrong were also jailed for the Woolwich bombing in which two people died.

Later Mr Conlon’s father Giuseppe, and members of the Maguire family – who became known as the Maguire Seven – were arrested and jailed for possessing and supplying the IRA with the explosives for the bombs.

But all those involved protested their innocence and after years of campaigning their convictions were overturned.

In October 1989 the Court of Appeal quashed the sentences of the Guildford Four after they had served 14 years behind bars, amid doubts raised about the police evidence against them.

An investigation into the case by Avon and Somerset Police found serious flaws in the way Surrey Police handled the case.

Emerging from the Court of Appeal a free man, Mr Conlon declared: ‘I have been in prison for something I did not do. I am totally innocent.

‘The Maguire Seven are innocent. Let’s hope the Birmingham Six are freed.’

In July 2000 the Prime Minister Tony Blair became the first senior politician to apologise to the Guildford Four.

Giuseppe Conlon died in prison in 1980, still protesting his innocence, and never saw his son freed.

In June 1991 Giuseppe’s sentence was posthumously overturned by the Court of Appeal along with those of the Maguires.

The Birmingham Six also had their convictions overturned on appeal in 1991.

Although the Guildford Four scandal has been known for 30 years, the case files remain classified.

Along with the Birmingham Six the material associated with the investigation and prosecution is held under the Official Secrets Act where it can remain shut to the public for 75 years.

Mr Conlon, the best known of the Guildford Four, died in June 2014 aged 60 after a long illness.

His story was told in the 1993 film In The Name Of The Father, in which he was played by Daniel Day Lewis.