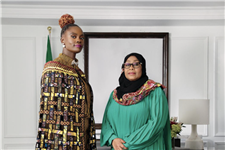 Tanzanian President Samia Suluhu Hassan is the country’s first female president and Africa’s only female leader. Her leadership has sparked change for women of color across the globe, including Francia Márquez, who was recently elected as Colombia’s first Black woman vice president.

One year into the country — and continent’s — most prestigious role for a woman, many are applauding Madame President Suluhu Hassan for her leadership style and promotion of women. But that’s not where it ends. Since she’s stepped into office, Madame President Hassan has also been tasked with steering her country out of the economic and health crisis developed by the onset of the global COVID-19 pandemic, while simultaneously boosting Tanzania’s regional standing. All of which she has done with pride, courage and conviction.

Madame President Samia Suluhu Hassan or “Mama Samia” as she is affectionately called in Tanzania, shares lessons in leadership, global community and creating impact with ESSENCE CEO Caroline Wanga. Check out the full interview below.