A bouncy castle operator who orchestrated a string of arson attacks to bring down his competitors was assaulted in prison and is refusing to leave his cell, a court has heard.

James Balcombe, 57, is living in fear of further attacks after the bashing required hospital treatment, his lawyer told the County Court on Wednesday. 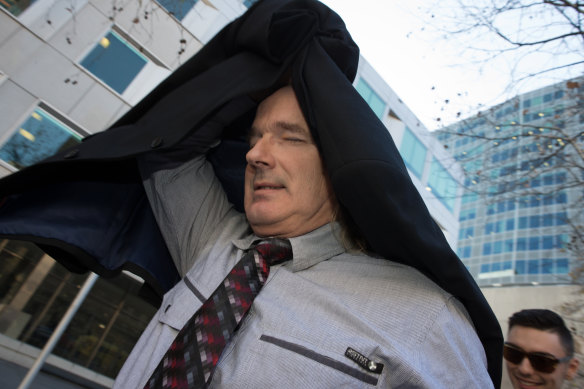 James Balcombe outside the County Court in 2017.Credit:Jason South

Balcombe paid a former staff member and two other men to firebomb bouncy castle hire rivals on at least 10 occasions in the summer of 2016-17, terrorising operators and causing more than $1 million in damages.

Defence counsel Simon Kenny told the court his client had been assaulted by another inmate at the remand facility where he is being held and had to be taken to hospital for treatment.

Kenny did not reveal the nature of Balcombe’s injuries but said his client had become so fearful of further attacks he was refusing to leave his cell.

“He says he spends all of his time in his cell,” Kenny told the court. “He is in constant fear of further assault by the prisoner that assaulted him and other prisoners connected to that prisoner.”

It is unclear when the alleged assault occurred. Balcombe has been in custody since 2020 when he was arrested by federal police officers in Western Australia and extradited to Victoria.

Balcombe, who at the time of his arrest was wearing a wig and had grown a long beard to alter his appearance, had been running a party hire business and manufacturing fake postage stamps from Perth under the alias Paul Johnson.

He was fined in Perth over the stamp scam and firearms offences. On his extradition to Victoria, he was jailed for a fortnight for previously using a fake doctor’s letter to avoid a court appearance.

The 57-year-old admitted last year to 11 charges of conspiracy to commit arson over the Molotov cocktail attacks on businesses in Werribee, Tullamarine, Hallam, Keysborough, Hoppers Crossing and Warragul. 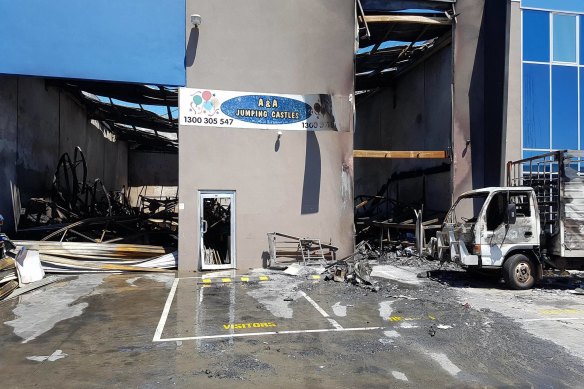 The aftermath of the fire at A&A Jumping Castles in Hoppers Crossing in January 2017.

The prosecution claims Balcombe gave his former staff member Craig Anderson and two other men the business names and addresses of his competitors and paid them $2000 for every business that was firebombed.

Most of the arson attempts either didn’t catch or caused limited damage, but a fire at the A&A Jumping Castles warehouse in Hoppers Crossing destroyed at least $1.4 million of property, including the building, a truck, jumping castles and other equipment.

His lawyer previously told the court Balcombe was abusing alcohol at the time of the arson attacks. He has since been diagnosed with mental health problems and poor impulse control.

Balcombe, who before starting his bouncy castle business sold goods on eBay, appeared in court via video-link with a long grey beard and wearing black-rimmed glasses. He was supported by his wife and son, who listened to the proceedings remotely.

Judge Stewart Bayles remanded him in custody. He will be sentenced at a later date.