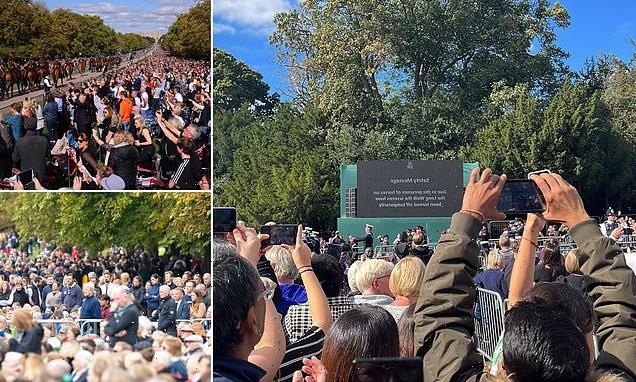 Giant TV screens streaming the Queen’s funeral to thousands of mourners at Windsor have been turned off for ‘safety reasons’ due to the ‘presence of horses’ – moments after suffering technical glitches during the historic event.

A dozen screens had been set up along the Long Walk to Windsor Castle, but during the service itself they flickered on and off and many of the crowd missed the bulk of the Archbishop of Canterbury’s sermon after they went blank for several minutes.

Some in the crowd groaned before turning to TV coverage on mobile phones but even then they were left disappointed as signal was so poor given the large numbers.

At one point there was audio and no images as the coverage continued and then that later confusingly switched to images and no audio.

The screens then turned off and back on, before a ‘safety message’ appeared reading: ‘Due to the presence of horses on the Long Walk the screens have been turned off temporarily.’

The animals will be taking part in the last stretch of the Queen’s final journey, which will see her coffin make its way through the castle grounds to St George’s Chapel, where she will be buried with the Duke of Edinburgh.

One disappointed mourner said: ‘I missed most of the sermon because of the TV screens going on and off. To be honest it ruined it a bit as a I wanted to hear what he had to say.’

When contacted by MailOnline The Royal Borough of Windsor and Maidenhead who had put the screens were unable to immediately explain the glitch. 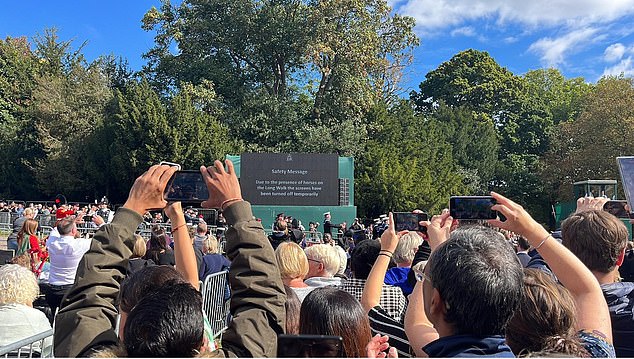 Giant TV screens at Windsor today turned off and back on, before a ‘safety message’ (pictured) appeared reading: ‘Due to the presence of horses on the Long Walk the screens have been turned off temporarily’ 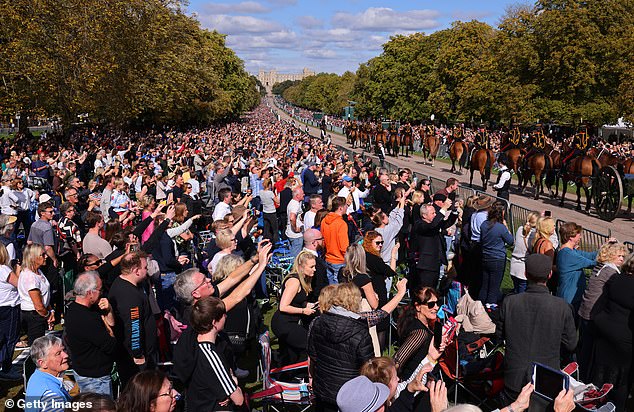 Members of the public line the Long Walk, where the Queen’s coffin will make its final journey to Windsor Castle

The Long Walk to Windsor Castle has a capacity for 96,000 members of the public, but fearing upwards of 150,000 visitors to the area, the council set up over-spill zones where mourners could watch the service on large screens just off the main viewing areas.

It is not yet known when or if the screens will be turned back on.

One passenger caught at a train stopped at Datchet said:’We watched the funeral service on the TV and then decided on a whim to go to Windsor.

‘We drove from Haywards Heath and got to Staines quite quickly as there was no traffic and we managed to get on a Windsor train straight away that left on time.

‘But just as we got to Datchet we stopped and the guard said we were waiting for VIPs to go over level Crossings and so we couldn’t go through.’ 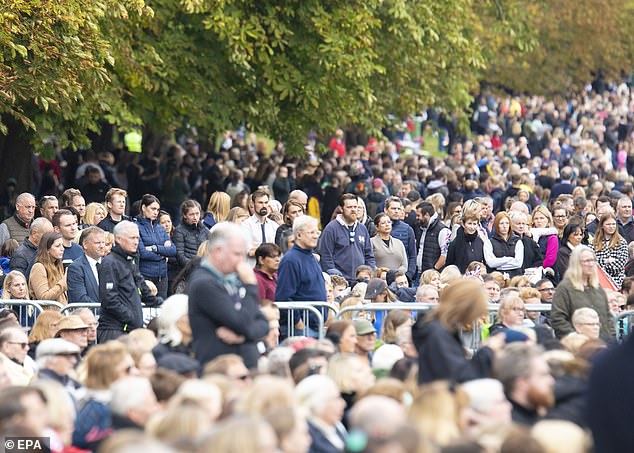 People watch the funeral of Queen Elizabeth II on a big screen, on the Long Walk at Windsor Castle

Towards the end of the service at Westminster Abbey, the sun broke through the clouds packed on the Long Walk.

As the National Anthem was sung marking the finale of the service those who were sitting stood up for a rousing rendition, before silence soon returned for the lament Sleep, dearie, Sleep by the Queen’s Piper, Major Paul Burns.

The M25 – usually packed on a Monday morning – had been eerily quiet with barely any vehicles.

At Staines-upon-Thames, which has a through rail service to Windsor, the car park was full by 7am with marshals on hand to guide people to trains.

Refreshment vans and dozens of portaloos have been installed along the Long Walk and flowers that were laid over the last few days by mourners at the Castle’s Cambridge Gate entrance have been cleared away.

They will be placed on the ground lining the edge of the road as the hearse makes its way to St George’s Chapel while cellophane on flowers has been removed for recycling and the thousands of cards gathered up ready to be presented to the Royal Family.

Council Leader Andrew Johnson said: ‘It will eclipse all that has gone before and rightly so. We are expecting a huge turnout of people in the town, which does of course present us with challenges.

‘We want people to be safe and to be secure but also to take part in a dignified and respectful service as well.

‘It is really is a once in a lifetime moment not only for the country, but also for the town as well.

‘It’s an event that has been in preparation for a long time, but like any event what happens on Monday I’m sure will be driven as much by the people here and how they want to remember and pay their respects to their Queen.’

The car park at Windsor and Eton Riverside station has been closed and barriers put up to zig zag thousands of mourners back to trains after the funeral which are expected to be picked.

Shops and businesses in Windsor were shut with the only ones open being newsagents, cafes and convenience stores but even these planned to close during the funeral.

The Council is asking for members of the public not to pitch up tents, to come early and to use public transport where possible.

Among those at the top of the Long Walk were Windsor Castle warden Shannon Carroll, 27, and her pals Samantha Geraghty, 24, and Heidi, 26, who declined to give her surname.

Shannon told MailOnline they had arrived at 6am after getting up at 4am to walk from nearby Maidenhead where they all live.

She added: ‘I’m here to pay my respects to an incredible woman who also happens to be my boss. I’ve worked at the Castle for five years and it’s the least I can do.

‘The Queen was a great employer and an inspirational leader. I don’t think we will ever see anyone like her again.’

Shannon said: ‘I queued up for 12 hours overnight Friday into Saturday and that was a very poignant and sombre experience.

‘It was incredibly quiet and still but it was at the same time very respectful and I wouldn’t have missed it for anything.’

Heidi said: ‘We are prepared for the day with snacks and drinks and it looks like it will stay dry. We will have a great view of the procession as it comes up the Long Walk and goes into the castle.

‘When we go here there were quite a few people here already but up the front where we are was surprisingly empty. I think we have the best spot to see history in the making.’

Samantha said: ‘It was an early start but well worth it. We will have a great view but we will have to watch the funeral service itself on our phones as we can’t see the big screens.’