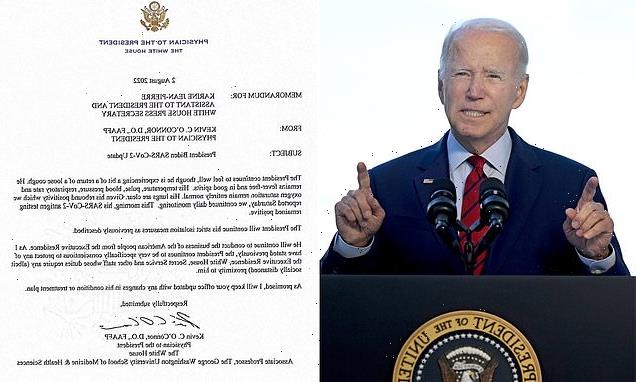 President Joe Biden’s ‘loose cough’ returned on Tuesday, according to his physician’s assessment, as he continued to test positive for COVID-19 some 13 days after first being diagnosed.

It means the 79-year-old remains stuck on the White House complex, isolating from staff and family members.

‘The president continues to feel well, though he is experiencing a bit of a return of a loose cough,’ wrote Dr. Kevin O’Connor.

‘He remains fever-free and in good spirits.’

Biden tested negative for COVID twice last week, but tested positive again on Saturday in what O’Connor described as a ‘rebound’ case seen in a small percentage of patients who take the antiviral drug Paxlovid.

It scuppered the president’s plans for a weekend back in Delaware.

But he was able to make a video appearance on Monday, announcing that the U.S. had killed Al Qaeda chief Ayman al-Zawahiri at the weekend.

In his letter, O’Connor said the president would continue his strict isolation. 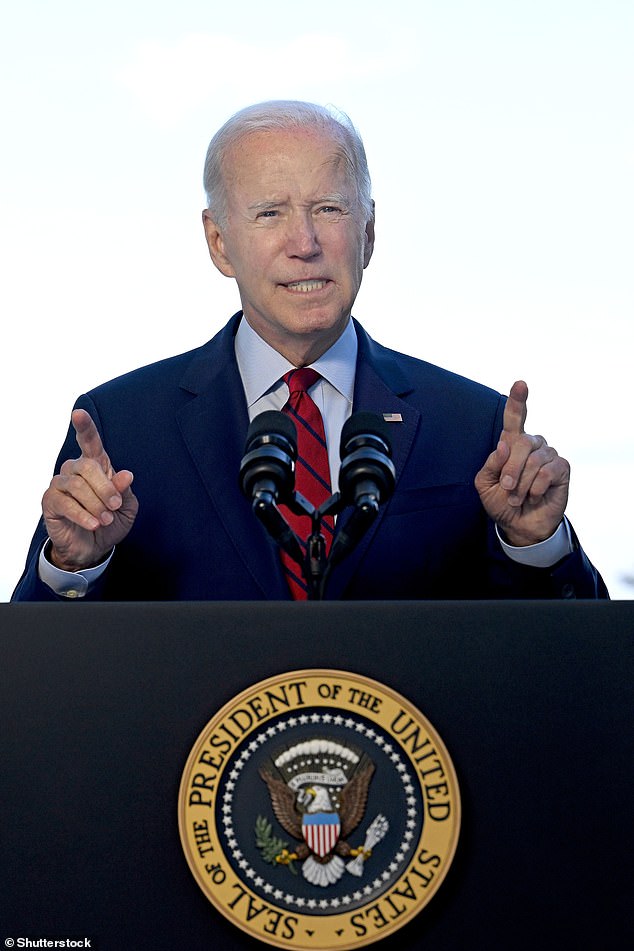 President Joe Biden’s ‘loose cough’ has returned as he continues to test positive for COVID-19, according to White House physician Dr Kevin O’Connor 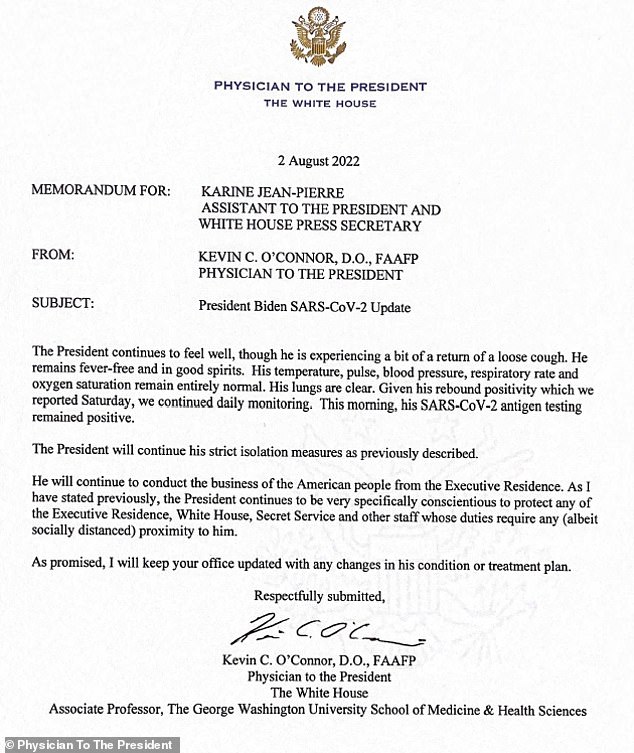 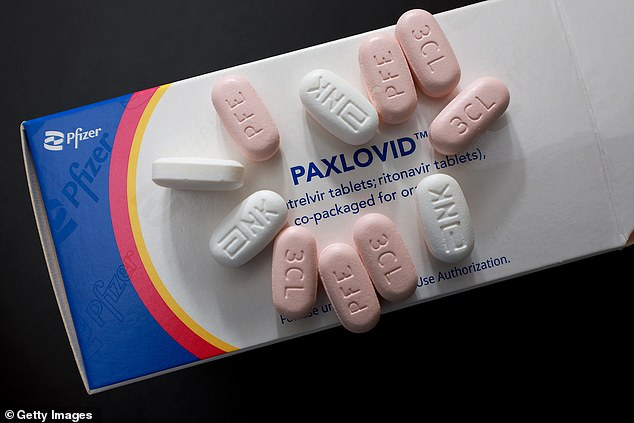 According to Pfizer, 40,000 Paxlovid prescriptions are being written every day

‘He will continue to conduct the business of the American people from the executive residence, he wrote.

‘As I have stated previously, the president continues to be very specifically conscientious to protect any of the executive residence, White House, Secret Service and other staff whose duties require any (albeit socially distanced) proximity to him.’

A day earlier, the White House said the president continues to have mild ‘lingering symptoms.’

Press Secretary Karine Jean-Pierre made the comment after O’Connor said in a letter Biden continues to ‘feel well’ after suffering a rebound case of the virus shortly after testing negative.

‘No reoccurring symptoms – meaning like, if you look at [O’Connor’s] original letter, there’s nothing. There’s nothing severe right? Because he feels fine. He feels he feels good.’

‘But as we know, all of us have had COVID, we do have a little bit of a lingering cough, a little bit of maybe a lingering sniffle. That’s not uncommon to happen, so that’s what we are talking about,’ she said, without specifying the exact nature of the president’s ailments. 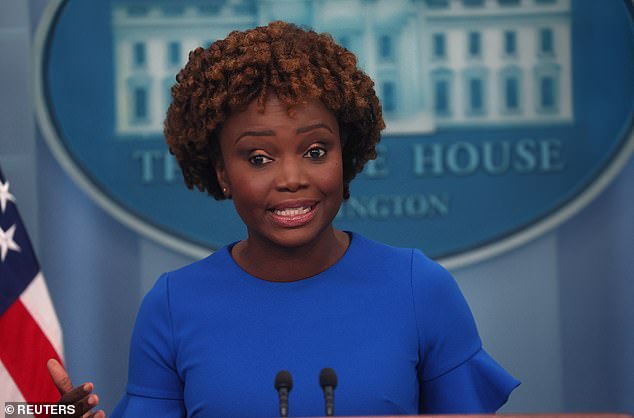 ‘Many of us have had COVID before and they tend to be lingering symptoms and that’s what I’m talking about,’ White House Press Secretary Karine Jean-Pierre said Monday, while offering few details about what symptoms the president is experiencing after his ‘rebound’ case

He appears to be doing better than he was following his original diagnosis last month. During Biden’s first round, ‘we had talked about a little fatigue, we talked about aches, you know there was a little bit of discomfort. That has not occurred,’ she said.

Jean-Pierre continued to dance around the exact nature of what the president was going through, while rattling off minor symptoms.

‘Many of us have had COVID before and they tend to be lingering symptoms and that’s what I’m talking about,’ she said, speaking to a press corps that, like much of the country, has seen a series of covid cases during the pandemic.

Pressed on whether Biden was still experiencing some things, she said ‘of course’ he was – and then pointed to Biden’s chronic dry cough, which proceeded his positive tests for COVID.

Her remarks drew repeated questions from the press about the precise nature of the president’s symptoms, what he was doing in isolation, and when he would resume travel. 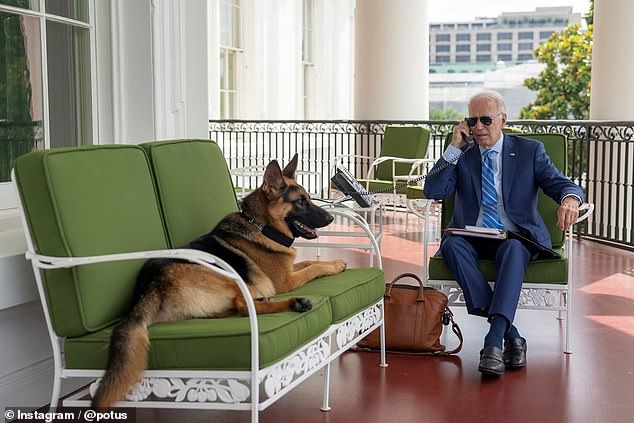 Biden’s dog Commander has been his companion. First lady Jill Biden is in Wilmington 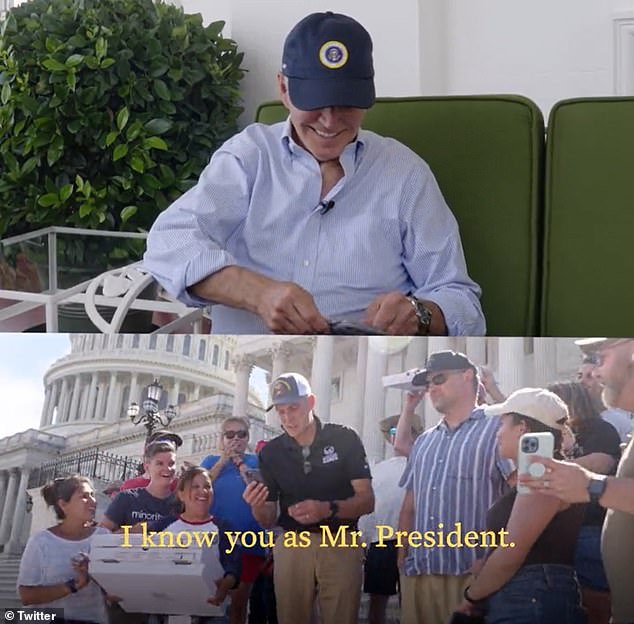 Biden released a video from COVID isolation on Sunday where he FaceTimes with advocates on Capitol Hill in lieu of going down there to help champion the PACT Act, which was defeated by Republicans and aims to aid veterans who were impacted by burn bits and other toxic chemicals

It all comes at crunch time in Washington, where Biden is in sight of grabbing some policy wins even as he eschews sitting down with lawmakers.

West Virginia Sen. Joe Manchin (D), who spent months negotiating directly with Biden, announced last week he had reached a deal with Senate Majority Leader Charles Schumer on a package that raises $739 billion in revenue, with $433 billion in spending on climate and other measures, and about $300 billion in deficit reduction.

But Sen. Kyrsten Sinema (D-Ariz.), whose vote would be crucial for passage, has yet to give the ‘reconciliation’ proposal, which is protected from Republican filibuster, a green light.

And House Speaker Nancy Pelosi is on a tour of Asia, with aggressive statements out of Beijing over reports she plans to visit Taiwan.