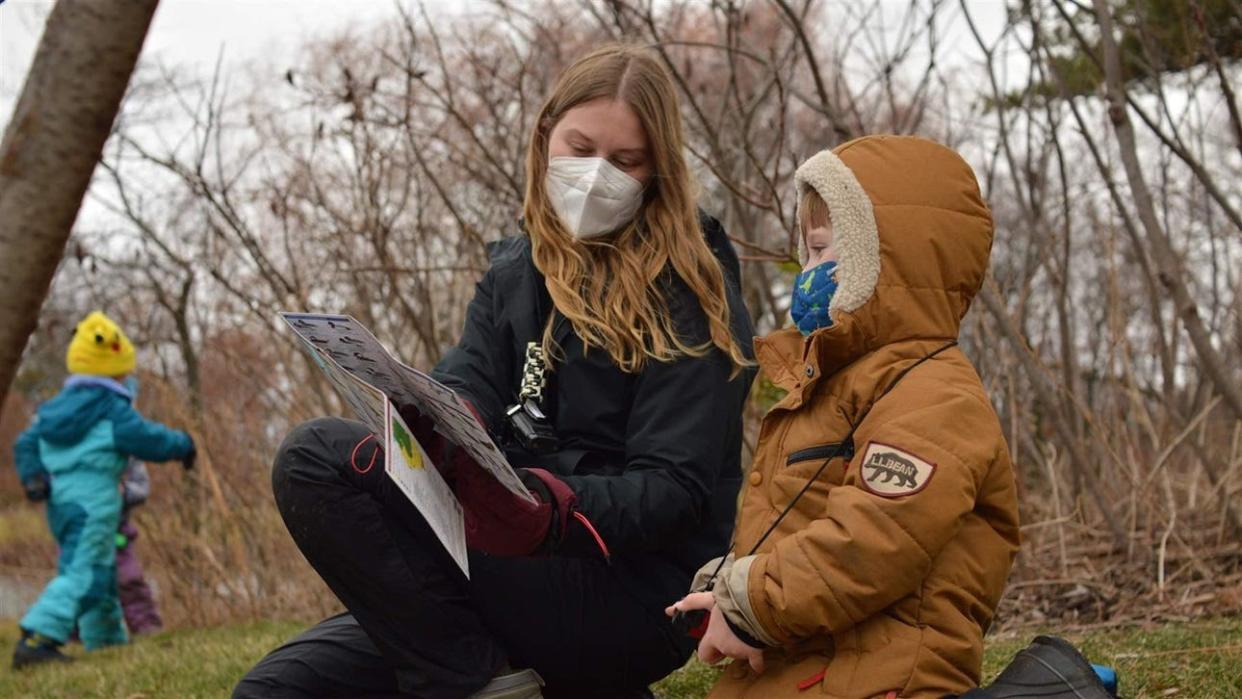 CHICAGO – On a wet December afternoon, Emma Donnelly leads a class of 4- and 5-year-olds down a muddy path at the Chicago Botanic Garden. The kids jump into puddles, climb trees and roll in dirt before running up a hill overlooking a lake where they spot a small animal swimming.

“What’s that swimming in the water over there?” Donnelly says to her class. “Is that an otter or maybe a muskrat?”

Soon, everyone is holding a pair of binoculars to better examine the critter. The outdoor adventure isn’t a field trip for these preschoolers but part of their normal routine. The children are enrolled in the Chicago Botanic Garden Nature Preschool and spend most of the day outside.

It’s part of a growing trend of nature-based preschools that have sprouted up across the country and received more interest since the coronavirus pandemic began.

In 2017, 275 nature preschools operated in the United States, according to a report from the Natural Start Alliance, a nature preschool advocacy organization within the nonprofit North American Association for Environmental Education. By 2020, that number more than doubled to 585 programs.

“Certainly, the pandemic has supported that; I think it’s supported the expansion of outdoor programming in elementary schools as well,” said Kit Harrington, a policy adviser for the Natural Start Alliance. “But I think increasingly what we’re seeing, particularly in the policy sphere as well, is obviously teachers are on the ground. They see this as a means of responding to the mental health crisis for children.”

MORE ON THIS: Pandemic babies are behind after years of stress, isolation affected brain development

The trend — along with studies showing the benefits of outdoor playtime — has inspired state officials to examine how to license such schools, a move that could unlock state funding to help children and programs in underserved communities.

Illinois boasted more than 20 nature preschools as of 2020, but Washington state ranked among the top states with more than 50, according to the Natural Start Alliance report. Washington also has led the way with legislation: In 2021, it became the first state in the nation to permanently license outdoor preschools.

That law followed a pilot program that helped develop meticulous standards for schools — detailing weather policies, risk assessment, classroom ratios and curriculum, as well as requirements for indoor spaces. There are strict parameters outlining emergency weather conditions. Teachers must find emergency shelter for children if there are lightning storms or winds over 25 mph, if the temperature exceeds 100 degrees or dips below 20, or if a natural disaster hits.

With standards in place, eligible families now can use subsidies from Washington’s Working Connections Child Care program to help pay for nature-based child care, and schools can participate in the Early Childhood Education and Assistance Program.

When Democratic state Sen. Claire Wilson sat down with the founder of Tiny Trees, an outdoor preschool that participated in the pilot program, her first question concerned accessibility.

“We have programs that families take their children to, but they’re usually two hours or three hours, and again, very much not reflective of our communities,” said Wilson, the author of the preschool licensing bill. “Hence became the conversation: What do we need to do in order to make it accessible? And licensing was a big deal.”

The rules around when programs require a license vary across the country, according to Harrington. In most states, including Washington, preschools need a license depending on how many hours the school operates, she said.

The preschool at the Chicago Botanic Garden is licensed, though it’s not required for nonprofits and parks districts in Illinois, said Ann Halley, director of the school’s early childhood programs and preschool director. 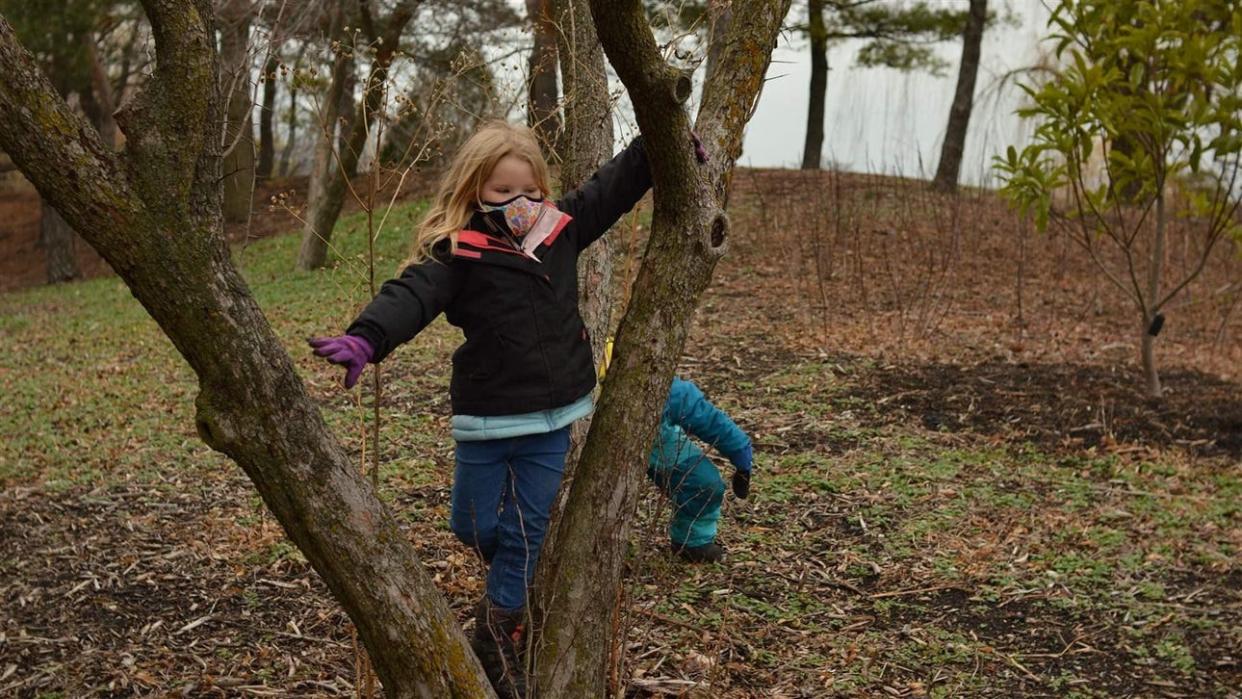 Donnelly, who also worked at the St. Louis Zoo Preschool in Missouri before moving to Illinois, still hopes that other states enact comprehensive licenses using Washington state as a model.

“There’s a real need for it nationwide rather than just state by state,” she said. “Washington’s a really good place to start.”

Although the number of outdoor preschools has exploded over the past five years, the rise does not correlate to an increase in legislation at the state level.

In 2020, Illinois Democratic state Sen. Ram Villivalam introduced two bills that would have required the Illinois Department of Children and Family Services to create an outdoor preschool pilot program.

Neither bill has moved forward since 2021.

Navigating the licensing landscapes remains a significant barrier in every state, said Liz Houston, deputy director of partnerships and development at Early Childhood Health Outdoors, an initiative of the National Wildlife Federation.

Creating a curriculum that is age appropriate and grounded in good science also has proven difficult since there’s a lack of data on outdoor preschools, she added.

“It’s such an emerging field, and there’s just not a lot of research,” Houston said.

In Washington state, Republican Sen. Ron Muzzall didn’t take issue with outdoor preschool. But he and others in the GOP voted against the legislation since it was wrapped up in an omnibus bill that included other policies that they opposed.

“When it comes to outdoor preschool, I don’t think there’s anything the matter with it. I think it’s a good thing,” Muzzall said.

MORE: Teenage brains may be aging faster due to stress from the pandemic, study finds

In Colorado, the state lacks the dedicated funding that Washington won, but its Department of Early Childhood is drafting a rule package to increase access to outdoor preschool. Emergency shelters and sanitation are top-of-mind questions for outdoor preschools, but so are thornier issues, like whether a camping knife is a developmentally appropriate tool for young children, said Mary Alice Cohen, deputy executive director of the Colorado Department of Early Childhood.

“Our primary goal is to utilize the Washington standards and from there, build a rule package that is appropriate and relevant to Colorado,” Cohen said. “Because we have a different climate, it’s just a different landscape.”

Advocates hope that the new law in Washington will help solve some of the equity and inclusion issues that outdoor preschools around the country have confronted. However, it’s a misconception that financial diversity will automatically lead to other forms of diversity, said Khavin Debbs, executive director of Tiny Trees Preschool. When the school opened in 2016, Debbs said, he noticed that most of the students were White and male at Tiny Trees’ four locations across the Puget Sound region.

“I live in this area. I know the people who are here predominantly,” Debbs said of his neighborhood in southeast Seattle. “This is not representative of that. We’re clearly doing something wrong.”

“My goal is to not rest on our laurels and to continue to have these conversations to make it even more diverse,” he said.

MORE: Pandemic babies are behind after years of stress, isolation affected brain development

At least one researcher is probing whether being outdoors helps children or whether those participating in outdoor preschool benefit from other types of privilege. Amber Fyfe-Johnson, an assistant research professor at Washington State University, published a review last year of nearly 300 studies examining the effects of time spent outside on children of all ages.

The review found that green spaces had a positive effect on children’s physical activity, cognition, behavior and mental health. However, the study represented only a brief snapshot, Fyfe-Johnson said.

Using Tiny Trees as her laboratory, Fyfe-Johnson is conducting a five-year study funded by the National Institutes of Health evaluating the effects of outdoor preschool on health outcomes in childhood. The study, which will conclude this June, looks at 100 children attending Tiny Trees and 100 children attending an indoor preschool, but who were waitlisted at Tiny Trees. About 60% of families involved in the study qualify for free or reduced tuition and 40% are families of color, she said.

In addition to research on physical health, stress and cognition, her research will measure the difference in gut microbiomes for children touching dirt versus those who are inside playing with toys on sanitized tabletops.

COVID-19 has never interrupted Fyfe-Johnson’s data collection since Tiny Trees experienced only a brief pause at the start of the pandemic. That’s the standard for most nature preschools, which had the built-in benefit of operating outside.

Epidemiologists have cautioned, however, that as newer variants emerge, they may transmit more easily outside. In general, people’s risk remains lower outside versus confined spaces, said Andrew Noymer, an epidemiologist and associate professor at University of California, Irvine. But he’s concerned about harsher climates like Chicago’s.

MORE: How to teach your child to behave, play well with others and overcome pandemic awkwardness

“I’m just frankly skeptical of how sustainable and practical this is,” he said. “In theory, it should result in fewer sick kids, but I’d really like to see a study.”

Despite the outdoor setting, the class at the Chicago Botanic Garden isn’t immune to the myriad of colds and respiratory illnesses that plague the typical preschool classroom: About half of the 14-person class had shown up that December afternoon and had masked to prevent further infection.

For parents such as Kelly Lee, the perceived drawbacks of traditional schools made outdoor preschool appear more attractive. Lee, who previously taught third grade, felt many preschools were emphasizing academics rather than play.

“They’re working on the whole person with the ability to problem-solve, whether it’s the weather or peers, ability to cope and calm themselves and find calm in nature,” Lee said. “So, like the things that a lot of us maybe realized in COVID.”

Lee’s son Ollie can’t read yet, but she’s confident that the curriculum taught at the outdoor preschool has prepared him. Scott Heston, who has an 18- and 21-year-old who went through traditional school, echoed that sentiment about his preschool daughter, Elodie.

“I don’t know what my child is gonna decide to do with her life. But if she’s going to be an engineer, she’s going to spend a lot of years in school,” Heston said. “I want her to be the engineer that knows the importance of spiders rather than just how many parking lots you need for a three-story office building.”

MORE: Even a mild case of COVID-19 can cause brain changes. It’s too soon to know if the damage lasts.

Heston acknowledged the high cost of proper clothing for outdoor preschool and scours eBay for gently used snowsuits that he knows his daughter will outgrow quickly. He worried how Elodie would adapt to the weather.

His only concern moving forward may be how long he can keep her in an outdoor school. While Elodie was watching the TV show “Daniel Tiger” with her little sister one day, she noticed something different about the main character’s school.

“She looked at me, and she said, ‘Daniel Tiger goes to school indoors,’” Heston said. “And she kind of looked out the window for a minute, said, ‘I don’t want to go to school indoors.’ So, we’ve looked around for [outdoor] schools that go for longer.”