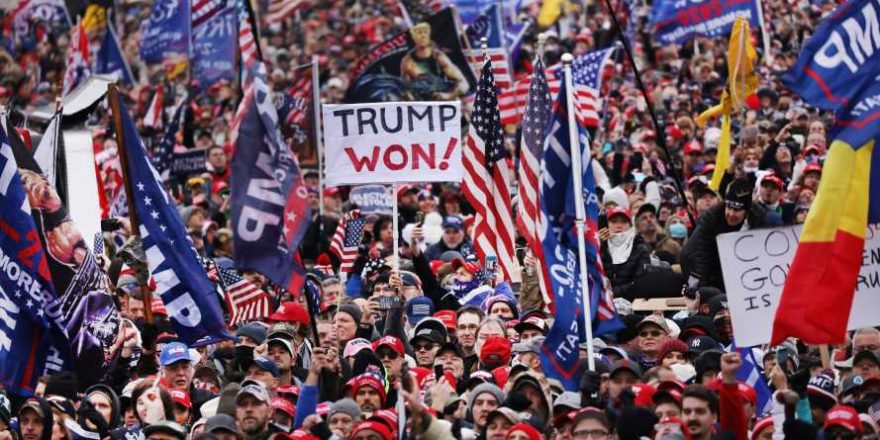 A sea of supporters for President Donald Trump flooded Washington, D.C., on Wednesday in a last-gasp attempt to subvert democracy and reinstall an authoritarian who lost the 2020 presidential election by more than 7 million votes.

Thousands of pro-Trump activists ― including QAnon conspiracy theorists, white supremacists and violent extremist groups including the Proud Boys ― descended on D.C. the same day elected officials were set to certify the Electoral College votes from the November presidential election and declare President-elect Joe Biden the winner. A throng of them clashed with police as they attempted to breach the Capitol.

Trump took the stage at 11 a.m. to reiterate the conspiracy theories and whine about his loss.

“Does anybody believe that Joe had 80 million votes?” Trump told the crowd. “Does anyone believe it? He had 80 million computer votes. It’s a disgrace, there’s never been anything like that.”

Shortly after his speech, thousands of Trump supporters reportedly headed toward the Capitol, where they attempted to “storm Congress,” according to Daily Beast reporter Will Sommer, who was at the scene. There were other reports that some buildings were being evacuated as Trump supporters clashed with police outside.

In one video, there appeared to be blood on the ground where protesters were pushing up against police forces:

Many in attendance had hoped for a Hail Mary victory in which Vice President Mike Pence would choose Trump as the electoral winner on Wednesday, despite being an impossible avenue to take in an election that has already been decided and during a process that is mostly ceremonial.

In his speech, Trump put a target on Vice President Mike Pence by falsely claiming it was now Pence’s responsibility to reject Biden as the electoral college winner.

“If Mike Pence does the right thing, we win the election,” Trump said to cheers just hours before Pence was scheduled to certify the electoral college votes in favor of Biden. “All Vice President Pence has to do is send it back to the states to re-certify, then I become president and you are the happiest people.”

But Trump’s fantasy to remain in power is just that ― a fantasy.

The specter of violence hung in the air in the days before Wednesday’s planned rally. The leader of the violent right-wing group Proud Boys, Henry “Enrique” Tarrio, was arrested in D.C. on Monday for allegedly burning a Black Lives Matter flag during a previous pro-Trump rally last month. He was also charged with possession of firearm magazines.

On Tuesday night, a mob of unruly Proud Boys took to the streets and were seen brawling with police officers before several were pepper sprayed and detained.

What was meant to be a routine certification for Biden’s victory was muddied by weeks of outrage from conspiracy theorists who slung baseless accusations claiming that Trump had actually won by hundreds of thousands of votes in key battleground states that he had in fact lost.

Those conspiracies culminated in multiple desperate attempts by Trump to overturn the results of the election, including working with QAnon-linked lawyers to file dozens of failed lawsuits riddled with lies claiming election fraud.

As Trump’s own allies ― including Fox News ― began to face the reality that Biden won, Trump dug his heels in deeper. He told his supporters to watch Newsmax and OAN, two far-right conspiracy outlets that have refused to accept the results of the election. Trump also managed to get more than a dozen Republican senators to formally object to Biden’s Electoral College victory, despite their objections having no effect on Wednesday’s outcome. And last Sunday, Trump was still retweeting baseless conspiracies, including tweets from Ron Watkins, the former administrator of extremist haven 8kun, a message board popular for peddling QAnon lies.

Trump’s increasing desperation to foment a coup was also revealed on Sunday when The Washington Post published an explosive recording of Trump demanding that Georgia Secretary of State and fellow Republican Brad Raffensperger recalculate votes in Trump’s favor.

Trump, who has a long history of throwing his allies under the bus in service of his own ends, made one last desperate plea Tuesday on Twitter, suggesting that Vice President Mike Pence use power he doesn’t have to block the electoral votes certifying Biden’s win to give Trump a last-minute victory.

Read live updates on election news below. (Note: An ad blocker may prevent you from seeing the blog, so if you’re using one, please pause or turn it off.)