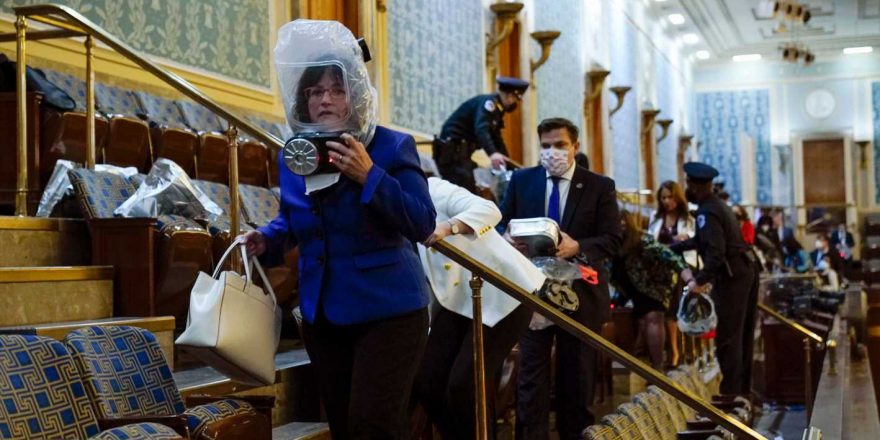 Congress resumed certifying Joe Biden’s 2020 Electoral College victory on Wednesday evening just hours after hundreds of supporters of outgoing President Donald Trump stormed the grounds of the U.S. Capitol and breached both legislative chambers in an effort to disrupt the ceremonial proceeding.

Scroll down or click here for live video from Congress and the latest updates in HuffPost’s live blog.

“They tried to disrupt our democracy. They failed,” Senate Majority Leader Mitch McConnell (R-Ky.) said. “This failed insurrection only underscores how crucial the task before us is for our republic.”

The effort by Republican lawmakers to throw out votes was always doomed. But the pro-Trump insurrection only weakened the effort within Congress.

Both the House and Senate ultimately rejected an objection to certifying Arizona’s electoral votes. In the House, a majority of Republicans ― 121 members ― voted to reject Arizona’s ballots, but the effort failed, with all Democrats voting against it for a 303-121 total.

The Senate rejected an objection to Arizona’s electoral votes in an overwhelming 93-6 vote. Six GOP senators voted to sustain the objection: Ted Cruz of Texas Josh Hawley of Missouri, Cindy Hyde-Smith of Mississippi, Roger Marshall of Kansas, John Kennedy of Louisiana and Tommy Tuberville of Alabama.

Several GOP senators who planned to join in the objection abandoned the effort shortly before the vote, including Sen. Kelly Loeffler (R-Ga.). Loeffler, who is fresh off of losing her seat in Georgia’s runoff elections, said on the Senate floor that she would no longer support the effort to stop the election from being certified.

When the joint session of Congress went on to consider other states’ electors, Republican House members objected to the electoral votes from Georgia, Michigan and Nevada. But they needed a senator to sign on to the objections as well in order for them to move forward. No senators joined the efforts, so Congress moved along.

Pennsylvania was an exception: Hawley joined House members in objecting to certification of the state’s electors. The Senate skipped debate and quickly rejected the objection in a 92 to 7 vote.

But the House may still take up to two hours to debate and vote on the Pennsylvania objection before the chambers can reconvene and continue to certify the remaining states.

The relative calm of the certification process was in stark contrast to chaos earlier in the day. At least one person was fatally shot as Trump supporters busted through barricades, scaled walls, broke windows and entered legislators’ offices. One man even broke into the Senate chamber and sat on the dais reserved for the president of the Senate, where Vice President Mike Pence had been presiding minutes before, yelling, “Trump won that election!”

Before violence at the Capitol, many Republicans had happily signed on to Trump’s claims that the election was stolen from them. They boosted baseless claims of voter fraud and said they would object to electoral votes from multiple states ― all of them ones Trump lost ― even though state-level officials had already confirmed the results.

Many of those Republicans insisted they only wanted a commission to look into those states’ results. But Trump made it clear that the goal of the effort was to keep him in power.

Some GOP senators blamed Wednesday’s shocking and surreal events directly on Trump and his rhetoric inciting the violence.

“The President bears responsibility for today’s events by promoting the unfounded conspiracy theories that have led to this point,” Sen. Richard Burr (R-N.C.) said in a statement.

Sen. Mitt Romney (R-Utah) condemned the “insurrection” at the Capitol and took aim at the dozen GOP senators who planned to object to Biden’s victory.

“Those who choose to continue to support his dangerous gambit by objecting to the results of a legitimate, democratic election will forever be seen as being complicit in an unprecedented attack against our democracy,” he said.

Senate Minority Leader Chuck Schumer (D-N.Y.) said on the Senate floor that Jan. 6, 2021, will go down as one of the darkest days in American history.

“This president bears a great deal of the blame,” Schumer said. “This mob was in good part President Trump’s doing.”

Some of the Republicans who earlier Wednesday were trying to block certification of election results changed their tune after the violence. Sen. James Lankford (R-Okla.) said that he expected Biden to be certified as the next president at the end of the process.

“Obviously the commission that we have asked for is not going to happen at this point, and I understand that,” Lankford said on the Senate floor. “We will work together in this body to be able to set a peaceful example for the days ahead.”

This is a developing story. Please check back for updates.

Read live updates below. (Note: An ad blocker may prevent you from seeing the blog, so if you’re using one, please pause or turn it off.)