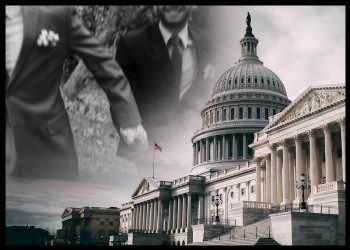 In yet another landmark bipartisan vote, the House of Representatives has passed the Respect for Marriage Act, which protects same-sex and interracial marriage.

The bill was passed by a 258-169 vote, with 39 Republicans joining Democrats in supporting the legislation.

The legislation was approved by the Senate last week with support from 12 Republican Senators.

The bill will now go to President Joe Biden to be signed into law.

Biden said the House’s bipartisan passage of the Respect for Marriage Act by a significant margin will give peace of mind to millions of LGBTQI+ and interracial couples who are now guaranteed the rights and protections to which they and their children are entitled.

“After the uncertainty caused by the Supreme Court’s Dobbs decision, Congress has restored a measure of security to millions of marriages and families. They have also provided hope and dignity to millions of young people across this country who can grow up knowing that their government will recognize and respect the families they build,” Biden said in a statement.

He thanked “The unwavering champions of this legislation in Congress” — Representatives Nadler, Cicilline, and Davids in the House, and Senators Baldwin, Collins, Portman, Sinema, Tillis, and Feinstein in the Senate — “who refused to be deterred and brought this vital bill over the finish line.”

It was crucial that the House pass the bill in this lame duck session before Republicans take control of the lower chamber in January.

However, the bill would not require a State to issue a marriage license contrary to state law.