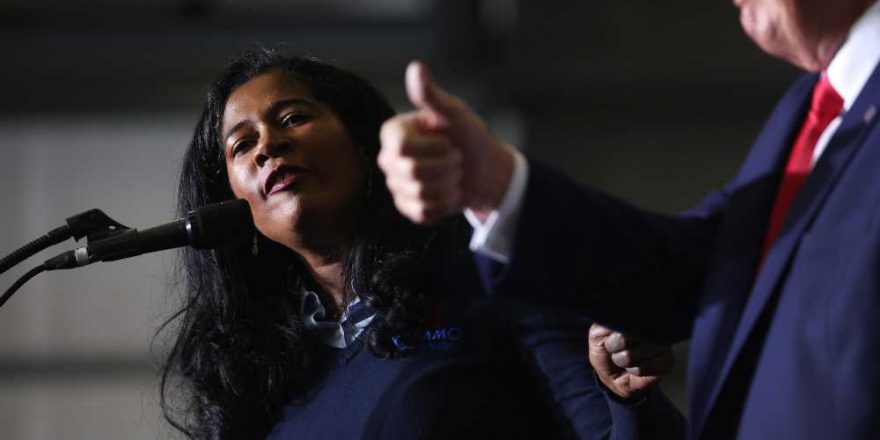 Former president Donald Trump has endorsed some wacky candidates since leaving office, including Michigan’s Republican nominee for secretary of state, Kristina Karamo. In a podcast episode unearthed by CNN’s KFile, Karamo claimed that abortion is “child sacrifice” and a “satanic practice,” CNN revealed on Sunday.

Karamo expressed her absurd beliefs about abortion on her podcast, It’s Solid Food. “Abortion is really nothing new,” she said. “The child sacrifice is a very satanic practice, and that’s precisely what abortion is. And we need to see it as such.”

Later, she called the medical procedure “the greatest crime of our nation’s history.”

“When people in other cultures, when they engage in child sacrifice, they didn’t just sacrifice the child for the sake of bloodshed,” Karamo said during the episode. “They sacrificed the child ’cause they were hoping to get prosperity, and that’s precisely why people have abortion now. ‘Because I’m not ready. I don’t wanna have a baby. I don’t feel like it. I don’t have time. I wanna make more money. I want my freedom.’ So you’re sacrificing that child hoping to get something out of their death, which is your freedom, your happiness, your prosperity.”

Karamo’s ludicrous comments didn’t stop there. The candidate, who describes herself as a Christian, said in another episode found by KFile that people have sacrificed other human beings, including their own children, over “thousands of years, just packaged differently.”

“[People] were sacrificing them to these deities, which were really demons,” she claimed.

In a Sept. 2020 podcast episode, Karamo said that she believes demonic possession exists and can be transferred in “intimate relationships.”

“If a person has demonic possession — I know it’s gonna sound really crazy to me saying that for some people, thinking like, ‘What?!’” she said. “But having intimate relationships with people who are demonically possessed or oppressed — I strongly believe that a person opens themselves up to possession. Demonic possession is real.”

Karamo also attacked Netflix over the issue of abortion in 2018. In a video from her website, she espoused a vast left-wing conspiracy between the company and liberal political operatives, such as George Soros and former President Barack Obama, to promote abortion.

“Is abortion funny to you? I would argue that it is nothing funny about abortion whatsoever, but apparently Netflix found it quite all right to air episodes of Michelle Wolf’s show or season,” Karamo said. Wolf, a comedian perhaps most famous for mocking Sarah Huckabee Sanders at the White House Correspondents Dinner, hosted a Netflix show in 2018 where she revealed that she’d had an abortion.

“Why is Netflix putting out a series like this?” Karamo said. “All these people with these interesting political motives, all teaming up to create content for you to consume.” But Karamo’s outlandish claims don’t stop at devil worship and child sacrifice. She is also fiercely anti-vaxx, has attacked the LGBTQ community, and alleged she witnessed election tampering in the 2020 race when acting as a poll challenger, claiming without evidence that voter fraud was rampant in the state.

Thankfully, though, candidates bearing the Trump stamp of approval have not fared well in their elections as of late. Two congressional candidates in Georgia were steamrolled late last month in Republican primary runoffs. Both Vernon Jones and Jake Evans lost by double digits, losing by close to 50 points and more than 40 points, respectively.