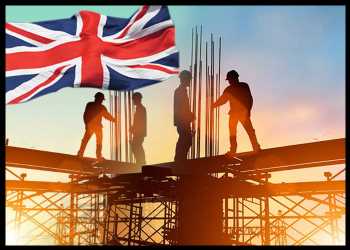 The UK construction sector expanded for the third consecutive month in November, but there was a renewed slowdown in growth amid subdued demand and reduced risk appetite among clients, while rising interest rates and worries over the economic outlook hurt confidence, adding to signs that the economy is in recession.

At 50.4, the construction Purchasing Managers’ Index was down from 53.2 in October, signaling the weakest performance since August, survey data from the Chartered Institute of Procurement & Supply, or CIPS, and S&P Global showed Tuesday. However, a reading above 50.0 indicates expansion.

Within the three segments of construction, only commercial work reported an increase in business activity. Meanwhile, civil engineering activity declined for the fifth consecutive month as there was a lack of new work to replace completed projects.

The survey showed a moderate rise in new orders across the construction sector. Nonetheless, the growth was much weaker than the average seen in the first half of the year due to weaker economic conditions.

Although employment continued to increase, the rate of job creation eased to its slowest since February 2021. Firms were more cautious about rising inflation and weaker growth.

On the price front, the survey showed that average cost burdens increased sharply in November. However, the rate of input cost inflation was the slowest since the start of 2021, partly due to softer commodity prices.

Confidence in the UK construction sector was the weakest since May 2020. The survey participants were worried about recession risks, higher interest rates and a subdued housing market outlook.

“Construction companies now have a tightrope to walk in terms of being ready for recovery and cautious around investment until the road is clear for sustainable building opportunities ahead,” John Glen, chief economist at the CIPS, said.

In the latest Economic Forecast from the Confederation of British Industry released Monday, the lobby cautioned that the UK will see a lost decade if no action is taken. With rocketing inflation and negative growth, Britain is in stagflation.