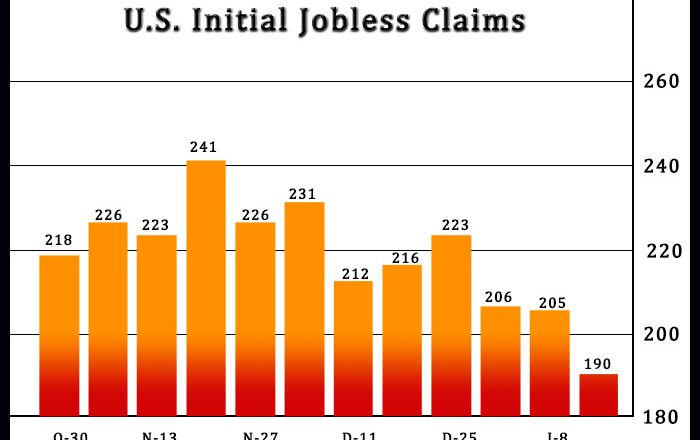 A report released by the Labor Department on Thursday unexpectedly showed a decrease in first-time claims for U.S. unemployment benefits in the week ended January 14th.

The Labor Department said initial jobless claims fell to 190,000, a decrease of 15,000 from the previous week’s unrevised level of 205,000. The dip surprised economists, who had expected jobless claims to rise to 214,000.

With the expected drop, initial jobless claims declined to their lowest level since hitting a matching figure in the week ended September 24th.

“While initial jobless claims continue to be noisy due to seasonal adjustment factors, the unexpected drop in the latest week is a frustrating reminder for the Fed that the labor market remains tight as employers hold onto workers,” said Matthew Martin, US Economist at Oxford Economics.

He added, “Our forecast assumes one more 25bps rate hike at the conclusion of the upcoming FOMC meeting, but we see risks as skewed toward additional rate hikes.”

The report said the less volatile four-week moving average also edged down to 206,000, a decrease of 6,500 from the previous week’s unrevised average of 212,500.

Meanwhile, the Labor Department said continuing claims, a reading on the number of people receiving ongoing unemployment assistance, rose by 17,000 to 1.647 million in the week ended January t7h.