Home » Economy » U.S. Personal Income Increases 0.5% In May, In Line With Estimates 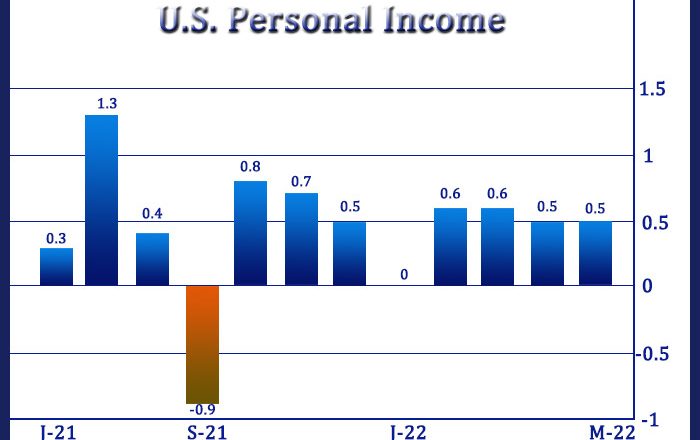 U.S. Personal Income Increases 0.5% In May, In Line With Estimates

Personal income in the U.S. increased in line with economist estimates in the month of May, according to a report released by the Commerce Department on Thursday.

The report showed personal spending rose by 0.5 percent in May, matching the revised increase seen in April as well as expectations.

The Commerce Department said the personal income growth primarily reflected increases in compensation and proprietors’ income that were partly offset by a decrease in government social benefits.

Meanwhile, the report showed personal spending edged up by 0.2 percent in May after climbing by a downwardly revised 0.6 percent in April.

Economists had expected personal spending to increase by 0.5 percent compared to the 0.9 percent advance originally reported for the previous month.

Real personal spending, which excludes price changes, fell by 0.4 percent in May after rising by 0.3 percent in April.

“The larger than expected 0.4% fall in real consumption in May, together with downward revisions to gains in previous months, means we now expect consumption to rise by just 0.8% annualized in the second quarter, down sharply from our previous estimate of close to 3.0%,” said Michael Pearce, Senior U.S. Economist at Capital Economics.

He added, “As a result, second quarter GDP growth is now on track to be closer to 1.0% annualized, down from our previous estimate of 2.7%, and we expect growth to remain below trend over the second half of the year too.”

With income increasing by more than spending, personal saving as a percentage of disposable income rose to 5.4 percent in May from 5.2 percent in April.

A reading on inflation said to be preferred by the Federal Reserve showed the annual rate of core consumer price growth slowed to 4.7 percent in May from 4.9 percent in April.

“That is not the “clear and compelling” evidence the Fed needs to shift to less aggressive rate hikes,” Pearce said. “But it does highlight that the smaller weight for housing in the PCE basket and the more modest rate of medical care inflation on the broader PCE measure means inflation on the Fed’s preferred measure is not quite as bad as you’d think by looking at the CPI figures alone.”