Apecoin, the Ethereum-based token tied to the widely popular and almost definitely probably not 4Chan-related Bored Ape Yacht Club NFT project, saw its market cap drop by 67.2% or $4.3 billion during May and it has continued to slide since.

Despite bearish macro factors looming over both crypto and stock markets throughout 2022, May in particular was a difficult month for crypto (thanks Terra!)

Much like many other assets, Apecoin was unable to escape the brunt of this downturn, and its market cap declined by $4.3 billion to sit at roughly $2.1 billion by May 31 as the price dropped from $21.27 to $6.97, according to data from CoinGecko. 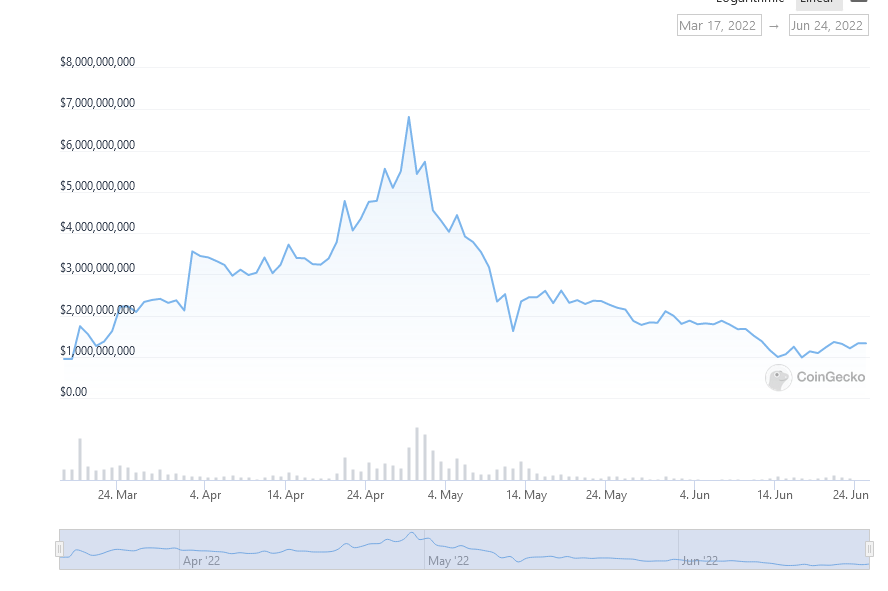 Trading volumes were around $5.7 billion at the start of May but fell to $498 million by the end of the month.

Since then the market cap has continued to slide to $1.3 billion, with a price of $4.40 per token at the time of writing, while 24-hour trading volume is currently totaling around $264 million. That’s the lowest since it launched in March.

Doodles, one of the top NFT projects in the space founded by respected artist Burnt Toast, has signed iconic musician Pharrell Williams as its Chief Brand Officer.

To date, the Doodles NFT project has generated around $503 million worth of secondary sales since launch in October 2021, and the team is currently gearing up for its second NFT drop of 10,000 tokenized avatars at a yet-to-be-revealed time later this year.

Williams is the man behind the much-loved, gut-wrenching, headache-inducing song “Happy” that has more than 1 billion plays on YouTube, and will work to guide the project’s strategy relating to artwork, music, product lines, animation and virtual/public events. The musician will also produce a Doodles-inspired music album titled “Doodles Records: Volume 1.”

The announcement was made at the NYC NFT event on June 22, with the project also revealing it had closed a funding round led by Reddit co-founder Alexis Ohanian’s VC firm, Seven Seven Six. The amount of capital was undisclosed however.

“I’m a big fan of the brand,” said Williams in a video message, adding that “We’re going to build from the core community outward and bring Doodles to new heights, new levels.”

Art expert Magnus Resch thinks that mainstream adoption of NFT tech is helping break down the barriers to art collection and is attracting new buyers to a field that has often struggled for numbers due to its elitist nature.

Resch is an art market economist and holds a Ph.D. in economics from Harvard University. He has also authored two books on the art business dubbed “Management of Art Galleries” and “How to Become a Successful Artist.”

Speaking with Art News on June 23, Resch highlighted an interesting point on tokenized art, as he argued that the price transparency and the relative ease of purchasing makes it much less threatening for new collectors to enter the market:

“The biggest problem in the art market is that we have too many visitors and too few buyers, the number of buyers is going down. And why is that? Because buyers are scared to enter the art world. It’s too elitist, it’s not open to first-time buyers. If you don’t manage to convince rookies [to join] into the art world, we will all fail.

“But NFTs can help solve this issue. Suddenly there are people buying because they had the full transparency of prices and automatic access,” he added.

Related: Nonfungible airdrops: Could NFA become the next big acronym in the crypto space?

Solana blockchain/Solana Labs co-founder and CEO Anatoly Yakovenko has announced that the team will roll out an Android web3-focused smartphone in Q1 2023 named Saga.

The phone will have a 6.67-inch 120Hz OLED display, 512GB of storage, 12GB of RAM, and will be powered by Qualcomm’s latest Snapdragon 8 Plus Gen 1 chip. It will also have a 50-megapixel primary camera and a 12-megapixel ultra-wide shooter. It will be priced at $1,000 and pre-orders with a deposit of $100 are now open.

No word yet on whether the phone will go offline every other month and require a manual reboot.

eBay, an e-commerce giant, on June 22 announced the acquisition KnownOrigin — an NFT marketplace that will help the firm foray further into the world of blockchain technology and digital collectibles.