Justin Sun Reaffirms Support For Huobi Token, Vows To Take Huobi Back To The Top 3

Justin Sun, Ambassador and Permanent Representative of Grenada to the WTO, announced his involvement with virtual assets exchange Huobi in early October, and the blockchain space has since been rife with speculation as to what the future holds for Huobi. Some have wondered if Sun’s leadership will result in a change in strategic marketing direction for the exchange, while still others have wondered how Huobi Token (HT), the exchange’s platform token, will perform going forward. How much room is there for growth, and where is Huobi headed?

On October 10, shortly after Huobi founder Leon Li announced the sale of his majority stake in the exchange to Hong Kong-based About Capital, Sun, speaking in his position as a representative of the Huobi Global Advisory Board, made clear his intention to revitalize Huobi.

Sun outlined how strengthening HT would play a key role in enhancing the virtual assets exchange’s standing on a global level. He further hinted at significant strategic moves on the exchange’s part, including branding upgrades, product relaunches, and more. Industry partnerships and efficient business operations would play crucial roles in increasing the exchange’s competitiveness, Sun declared.

Other members of the Huobi Global Advisory Board include:

·         Wang Yang, vice president of the Hong Kong University of Science and Technology

The distinguished members of the Global Advisory Board are expected to contribute their knowledge and expertise toward Huobi Global’s international expansion plans.

The price of HT jumped from $4 to $5 shortly after Sun’s announcement. Soon after, Sun’s Twitter posts detailed how his typical work schedule at Huobi was packed, with most days ending before midnight.

During an interview with Bloomberg on October 14, Sun revealed that he holds tens of millions of HT and intends to continue increasing his holdings. The price of HT further rose, following the interview.

Various activities have been kickstarted to market Huobi as a leader in the virtual assets space. As the focus of perpetual public attention, particularly in the social media space, Sun has declared that HT’s price will well exceed its current levels. 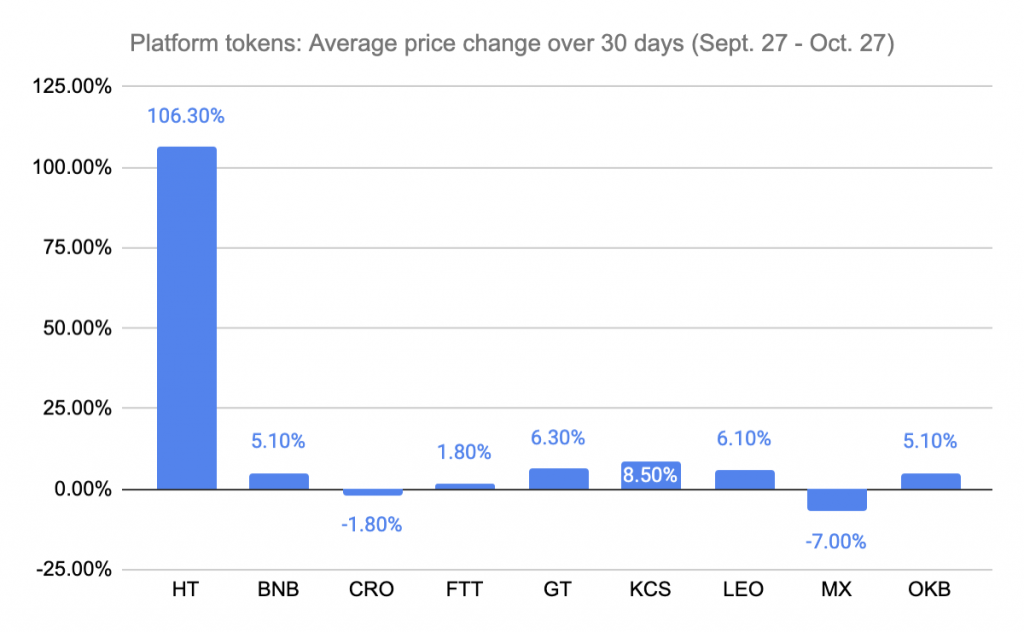 Platforms commonly employ token burning to preserve a token’s price, and Huobi is no exception. Of the nine major exchange platforms who have their ecosystem coins traded in the virtual assets market today, eight carry out token destruction on a regular basis (Crypto.com is the only platform that has not declared the repurchase and destruction data of its CRO token on its official website).

Based on incomplete statistics as of October 16 (some data for Q3 was undisclosed or partially disclosed), the total repurchase and destruction disclosed by the eight exchanges in the first three quarters of this year stood at approximately US$2.43 billion. Of this, BNB accounted for about US$1.94 billion (excluding the burned part of transaction fees), or 5.88 million BNB, which is the largest total amount of repurchase and destruction among all exchanges. This was followed by FTT (5.30 million equivalent to US$180 million) and OKB (11.05 million equivalent to US$169 million) for the period spanning last December to August.

HT reported a total repurchase and destruction amount of 5.335 million HT, ranking in the middle of the repurchase data. As of October 15, 2022, the total number of HT destroyed reached 295.51 million, with the current circulation at 162.68 million. The drop in transaction volume and burns is also to be expected, as Huobi had exited the China market and was looking for a buyer. It also means that if Huobi returns to the industry top three rankings according to Justin Sun’s plan, the corresponding burn amount will need to increase by at least 5 to 10 times. If this goal can be achieved, HT will have tremendous growth potential. 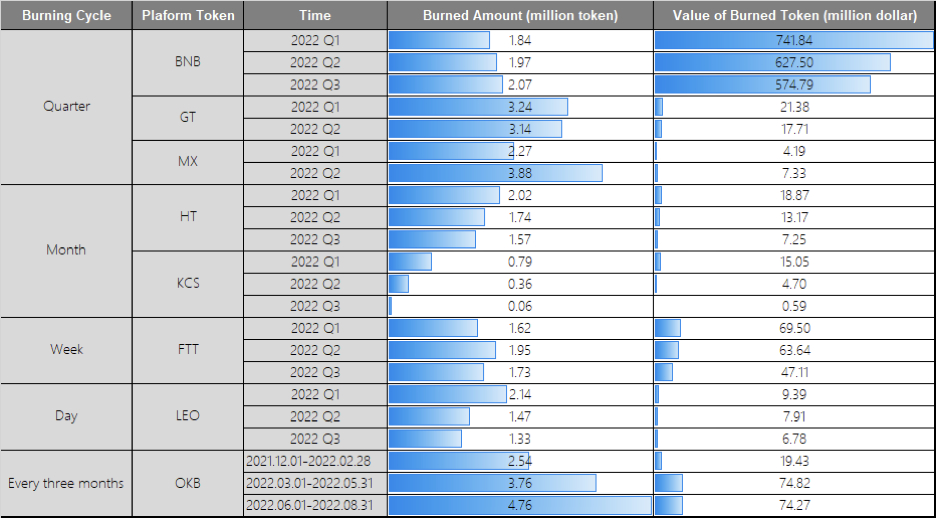 1. This table shows the total buyback/burned amount of platform tokens on a quarterly basis. The value of token burning is displayed according to the daily, weekly, or monthly average token price provided by CoinGecko.

2. As of October 27th, KuCoin has not released the total buyback/burned amount of KCS for September, so the data for KuCoin’s third quarter is incomplete.

It is worth mentioning that after Justin Sun joined Huobi, he was quick in getting the house in order by tackling the malaise left behind by his predecessors. Huobi removed 21 HUSD trading pairs on the evening of October 10, and only kept the USDT/HUSD trading pair. On October 28, Huobi announced the delisting of HUSD, and will convert users’ HUSD to USDT at a ratio of 1:1. The asset conversion is expected to be completed before November 4. As early as August this year, HUSD was reported to have misappropriated user funds, and once lost its peg for a brief period. Subsequently, Huobi clarified that it had ended its business ties with HUSD in April, and did not have much dealings with HUSD thereafter.

On one hand, HUSD, which was less transparent, was delisted. On the other, Justin Sun supported the rise of the USDD stablecoin which he led. From October 19 to December 31, he launched a spot trading event for USDD-related trading pairs that waived transaction fees. Although USDD is an algorithmic stablecoin, the number of USDC in its vault exceeds the total issuance of USDD, which basically indicates a 300% mortgage rate and high stability coefficient.

Based on Justin Sun’s strategic plan, Huobi, TRON, BTT, etc. are all working together to win in the market. Sun also said that the rise of HT will help to grow the ecosystems of Huobi and TRON. In future, HECO’s ecosystem will be combined with that of TRON and BTTC to create a public chain ecosystem, with TRON and the BTTC ecosystem developing in tandem.

In his new role at Huobi, Justin Sun has made HT his core focus. On the evening of October 26, he said in Twitter Space that more measures will be taken to increase the destruction of HT, with HT voting to be reopened and the listing rights returned to the community. 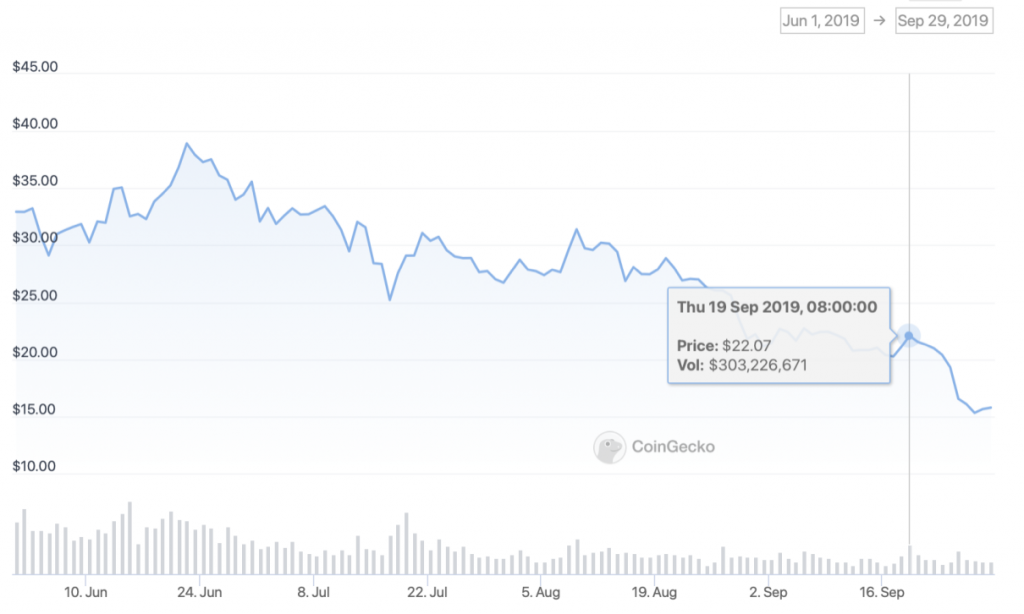 Based on Huobi’s daily transaction volume of about $2 billion in the third quarter of this year, its burnt amount stands at 60% of Binance’s for the same period in 2019. However, the price is only 20% that of BNB’s, remaining within the range of $4 – $7. This points to an under-valuation of HT’s current performance. 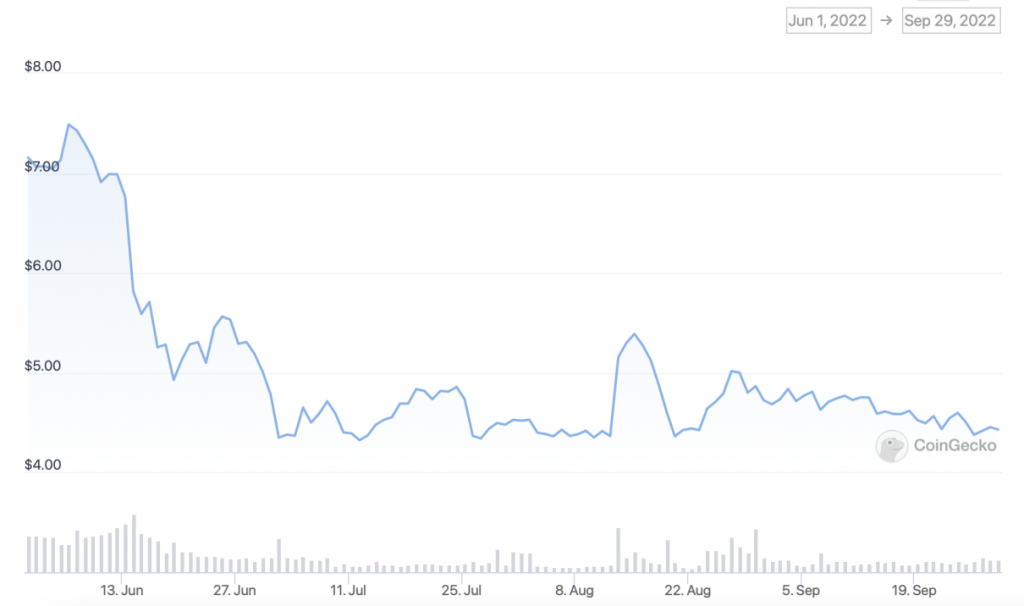 For HT, the first step may be for its users to regain confidence, benchmark itself against BNB’s valuation system, and return to a reasonable price range. The second step is figuring out how to expand the user base and regain new users through global marketing. As a serial entrepreneur who has successfully brought domestic projects overseas, Justin Sun may have significant marketing experience to tap for the purpose of acquiring overseas users.

At present, there remains a significant gap between the prices of HT and BNB. However, with the accelerated restart of Huobi, the growth trend of virtual assets, and the return of the bull market in future, HT’s performance may just be what Justin Sun envisioned – enjoying an uninterrupted upward trajectory.