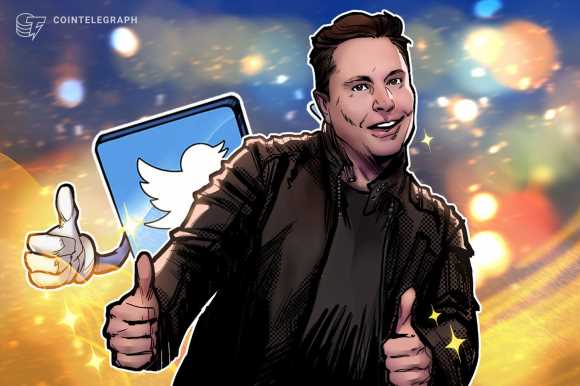 Crypto-friendly billionaire Elon Musk is set to finalize the acquisition of social media platform Twitter by Friday, Oct. 28 which brings to a close the protracted Musk-Twitter saga.

On Oct. 24 Musk vowed to the banks assisting with the roughly $13 billion of financing for the deal that it would be closed by the end of the week and the banks have completed the final credit agreement, one of the last steps before sending the money to Musk according to Bloomberg sources.

Musk has also reportedly notified his co-investors who are helping him fund the acquisition by sending over paperwork for the financing commitment according to Reuters sources which include venture capital firm Sequoia Capital, crypto exchange Binance, and Qatar’s Investment Authority.

During a conference in Saudi Arabia on Oct. 25, Binance CEO Changpeng Zhao reaffirmed his commitment to backing Musk’s takeover, as per Bloomberg.

The latest developments in the deal point to Musk seemingly adhering to a court-issued deadline set by a Delaware judge in early October where Musk filed his intention to proceed with closing the deal at the original $44 billion price after previously wanting to back out in July.

Musk intends to close the transaction at a price of $54.20 per share. Twitter stock prices jumped on the news, closing at $52.78 a share and up 2.45% for the day as per Yahoo Finance.

In the past, Musk has highlighted many areas of the platform he wishes to change with his stated “top priority” being to cut down on crypto scam tweets and at one time planned to charge users 0.1 Dogecoin (DOGE) — much less than half a cent — to post on Twitter but later admitted it wouldn’t be feasible.

The news comes a few days after rumors emerged that Twitter may be working on a cryptocurrency wallet according to Security researcher Jane Manchun Wong who made Forbes 30 under 30 for her high-profile tech leak scoops.

On Oct. 25 she tweeted the platform was working on a “wallet prototype” that supports “crypto deposit and withdrawal” but did not provide evidence or a source for her claim. Cointelegraph has reached out to Twitter for comment.

Related: How Crypto Twitter could change under Musk’s leadership

Meanwhile, news of Musk’s deal nearing its end comes as internal documents from Twitter seen by Reuters on Oct. 26 reveal the platform is struggling to retain its most active users, those who log in to the platform up to seven days a week and tweet a minimum of three times a week.

While these heavy users are less than 10% of the total monthly overall users they account for a massive 90% of all tweets on the platform and around half of Twitter’s global revenue.

The leaked research also found over the last two years the topics of interest among English-speaking heavy users have shifted with one of the highest-growing topics being cryptocurrency and interest in news, sports, and entertainment has seen a decline.