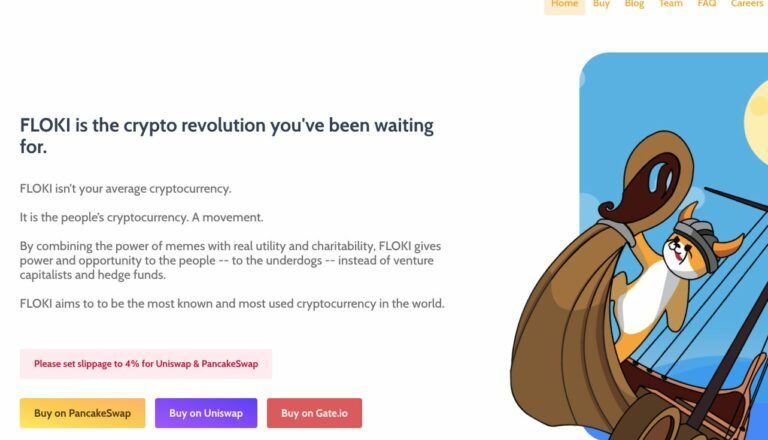 $FLOKI: A Massive Marketing Campaign Is Set to Launch in London Soon

On Saturday (April 23), the team behind highly popular meme-based cryptoasset Floki Inu ($FLOKI) announced a “win for crypto”: their first London marketing campaign of 2022 is going to launch on April 25.

What Is Floki Inu ($FLOKI)?

According to its developers, $FLOKI is “the people’s cryptocurrency,” and it “aims to be the most known and most used cryptocurrency in the world.”

$FLOKI is “cross-chain and available on both the Ethereum blockchain and the Binance Smart Chain.” The $FLOKI token has “a maximum supply of 10 trillion with 9.13T $FLOKI tokens in circulation.” It is worth noting that “there is a 3% tax on every buy and sell,” which “goes to the FLOKI treasury which is used for development of the FLOKI project, partnerships, making the world a better place through charitable initiatives, and creating awareness about FLOKI while ensuring adoption for our utility products when they go live.”

The Floki Inu team says that some of the projects that will use the $FLOKI token are as follows:

The FLOKI team requested a security audit from CertiK on January 19, and the final report was delivered on February 25:

“We’ve been working extremely hard. We’ve been working a long time. And to be completely blunt, we’ve got a win for crypto here, and I’m proud to announce that for the first London campaign of 2022, FLOKI is back in London on the 25th of April, which is Monday. This coming Monday.“

He went on to say that six months after FLOKI’s first agressive and pioneering campaign in London, FLOKI “continues to evolve, ecosystem continues to grow, and our return to London to engage the masses of another Viking invasion I think is long overdue.”

“So this time, we’re dipping our feet back in so to speak. We’re also proving a point — that we don’t come to fight, but if you’re going to try and fight us, we’re going to stand our ground. We don’t care who you think you are. We are going to protect our investors.

“We are going to continue doing what is right, and we’re not going to back down ever. So, we will start with 100 buses… We’re going to be posting it to Twitter… very shortly examples of what we are going to be projecting, but let’s just say it’s taken months to get approved and to get the kind of messages we want to get across, we’re going have 185 posters that are going to be across a number of stations, but the 18 mega mega billboards, which will be in the Underground, are going to be in some of the biggest stations in the capital…

“So the idea really is to actually help this time educate some of the masses and on the depths of utility of people’s cryptocurrency and once again help thrust FLOKI basically to a certain stage on all the world’s most exciting and cosmopolitan cities. So this is a massive, massive win for crypto.“

And around 30 minutes later, the FLOKI team provided some examples of what Londoners would be seeing soon across central London: