A Bitcoin (BTC) advocate on Twitter known by the name of ShireHodl, or simply Shire, sent over 110 micropayments to first-time Bitcoin Lightning users in response to Michael Saylor’s Lightning Network pool.

Shire asked those new to Lightning to download a Lightning wallet from App Store or Google Play Store and to send him a QR invoice. To pay the invoice, Shire scanned the code with his camera, and the Bitcoin Lightning Network did the rest. In the Tweet, Shire said he’d send 1000 sats to as many people as he can be bothered before sleep.

Speaking with Cointelegraph, Shire said that he has “sent out about 110 payments of 1000 sats.” Sats are short for Satoshis, or the smallest denomination of a Bitcoin. There are 100 million Satoshis in 1 Bitcoin. Shire said:

“It’s not much, maybe $20 in total, but the total fee is less than a penny. Using a credit card or debit card, the fees would have been more than the value transferred, so it would have been impossible.”

In all, Shire sent over 110 micropayments —effectively onboarding 110 new users to the Lightning Network. The business owner took Bitcoin Lightning’s adoption into his own hands because he recognized that many Bitcoin users had not used Lightning before.

Michael Saylor, Executive Chairman of Microstrategy, asked over 60,000 people if they had used Bitcoin Lightning in a poll: 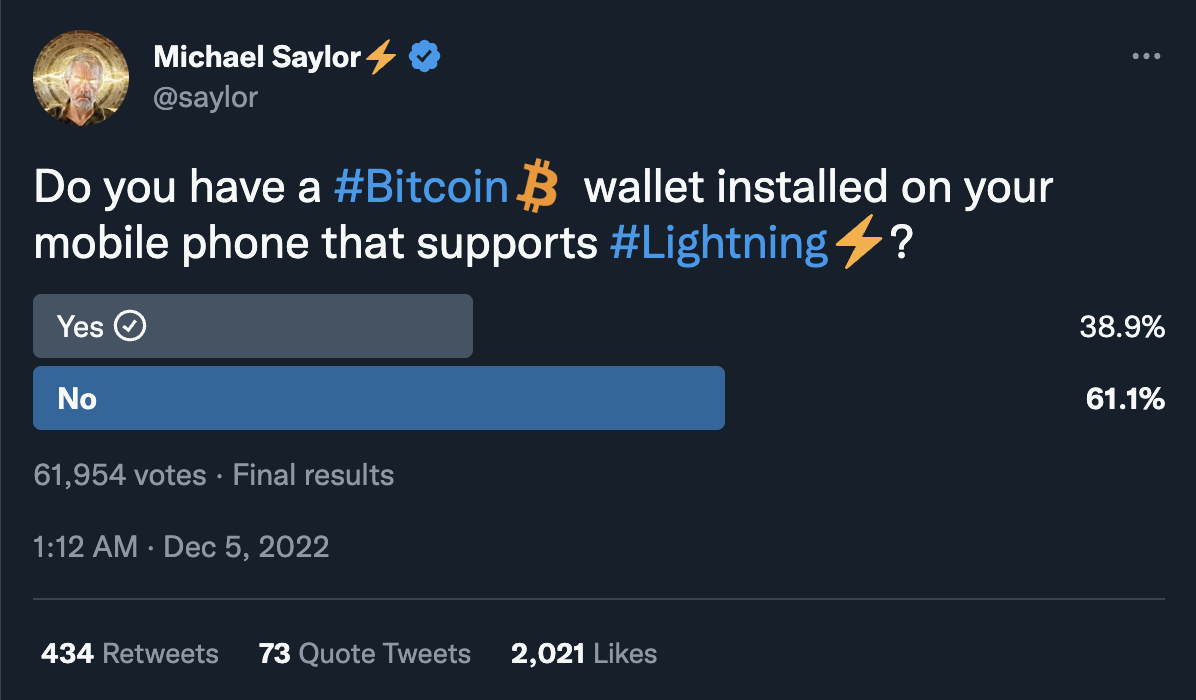 The results of the Michael Saylor poll inspired Shire to take action. He told Cointelegraph, “60% of respondents in his poll said they have never used a lightning wallet so this was a small incentive to give it a go.”

Also, I knew the fees would be minuscule and that people taking part would be all over the world, demonstrating how LN is borderless and will enable micropayments for all kinds of future applications.

Indeed, in recent news, the Lightning Network has been used to facilitate cross-border payments across Africa.

Shire, a Bitcoin maximalist, added that his experiment and onboarding masterclass only works with Bitcoin: “This can’t be done with shitcoins either. Fees are higher, settlement takes longer.”

“You need instant settlement on an asset with deep liquidity to be able to scale this to the world and its applications. Only Bitcoin is capable of fulfilling this role.”