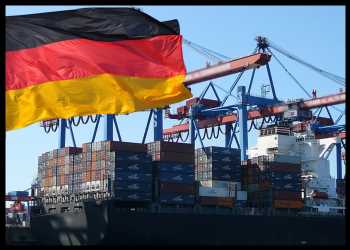 The war in Ukraine and the subsequent sanctions on Russia took its toll on German exports in March, official data revealed Wednesday.

Exports fell by more-than-expected 3.3 percent on a monthly basis in March, in contrast to the 6.2 percent expansion seen in February, data from Destatis showed on Wednesday. Shipments were forecast to drop 2.0 percent.

Exports to Russia plunged 62.3 percent because of the sanctions imposed as a result of Ukraine’s fight against Russia. At the same time, imports from Russia declined only 2.4 percent.

Overall imports grew 3.4 percent, faster than the economists’ forecast of 1.0 percent. This was followed by a 4.7 percent rise in February.

Consequently, the trade surplus fell to a seasonally adjusted EUR 3.2 billion in March from EUR 11.1 billion in the previous month. The surplus remained well below the expected level of EUR 9.8 billion.

The unadjusted trade surplus came in at EUR 9.7 billion compared to EUR 20.8 billion in the same period last year.

Most German exports went to the United States in March, with goods exports up 3.2 percent on February. On the other hand, shipments to China declined 4.3 percent and that to the UK by 3.9 percent.

Looking ahead, despite richly filled order books, the short-term outlook for German exports does not look encouraging, Carsten Brzeski, an ING economist, said.

Brzeski noted that new lockdowns in China and a continuation of, instead of easing, last year’s supply chain disruptions will leave significant marks on German industry.