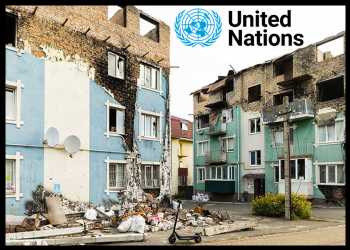 The UN General Assembly has adopted a resolution that calls for Russia to pay war reparations to Ukraine, as ambassadors met to resume their emergency special session devoted to the conflict.

Monday, nearly 50 nations co-sponsored the resolution on establishing an international mechanism for compensation for damage, loss and injury, as well as a register to document evidence and claims.

Ninety-four countries voted in favour of the resolution, and 14 against, while 73 abstained.

In presenting the resolution, Ukrainian Ambassador Sergiy Kyslytsya insisted that Russia must be held accountable for its violations of international law.

The Ambassador outlined the impact of the Russian war on his country, including bombings targeting residential buildings and infrastructure, the demolition of nearly half of the power grid and utilities, massive displacement, and atrocities such as murder, rape, torture and forced deportations.

The General Assembly is the UN’s most representative body, comprising all 193 Member States.

Meanwhile, Ukrainian President Volodymyr Zelensky presented to G20 leaders a 10-point peace plan to end Russia’s invasion of Ukraine. The peace plan, which he presented in a video speech, includes a path to nuclear safety, food security and a special tribunal for alleged Russian war crimes. He also proposed an “all for all” prisoner swap with Russia.

Zelensky urged G20 leaders, who have gathered in the Indonesian island of Bali, to use all their power to “make Russia abandon nuclear threats” and implement a price cap on energy imported from Russia.