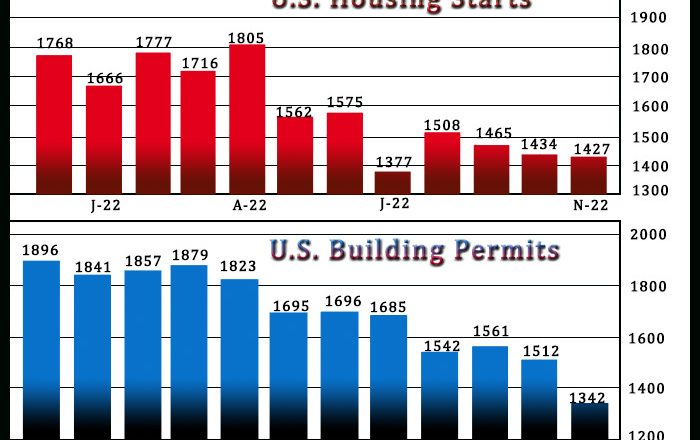 The Commerce Department released a report on Tuesday showing a decrease in new residential construction in the U.S. in the month of November.

Economists had expected housing starts to decline by 0.7 percent to a rate of 1.415 million from the 1.425 million originally reported for the previous month.

Building permits, an indicator of future housing demand, were expected to dive by 3.7 percent to 1.470 million from the 1.526 million originally reported for the previous month.

“The drop in permits, along with pessimistic homebuilder sentiment, point to further weakness in housing construction in the months ahead as high interest rates side-line many buyers,” said Nancy Vanden Houten, U.S. Lead Economist at Oxford Economics.

On Monday, the National Association of Home Builders released a separate report unexpectedly showing a continued deterioration in homebuilder confidence in the month of December.

The report showed the NAHB/Wells Fargo Housing Market Index fell to 31 in December from 33 in November. The decreased surprised economists, who had expected the index to rise to 36.

The housing market index declined for the twelfth straight month, falling to its lowest reading since mid-2012, with the exception of the onset of the pandemic in the spring of 2020.