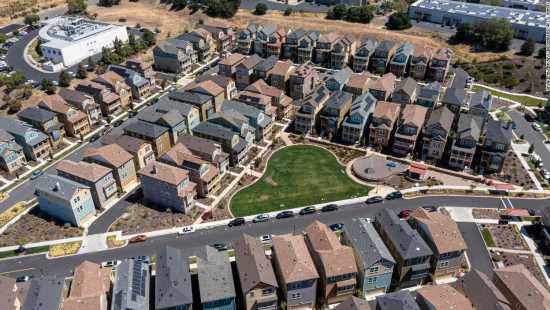 Typical monthly payment for US home up 42% in a year

(CNN Business)Editor’s Note: This story is part of CNN Business’ Nightcap newsletter. To get it in your inbox, sign up for free, here.

Here at Nightcap HQ, we have a special alarm bell that rings every time a study about Baby Boomers shaming Millennials is published. (I’m kidding, of course, but we do have the internet and a nose for unfair generational disparities.)
Here’s the thing: A study out of the UK this week says that half of the British public believe young people can’t afford to buy a home because they spend too much on coffee, Netflix and travel.

It’s the Avocado Toast Debacle all over again. In case anyone forgot: In 2017, an Australian millionaire said Millennials couldn’t afford to buy homes because they’re dropping “$40 a day on smashed avocados and coffees and not working.”

Of course, generational misconceptions are nothing new. The idea that younger people don’t work as hard goes back to Ancient Greece, according researchers at the Policy Institute and the Institute of Gerontology at King’s College London.

“Young people today love luxury; they have bad manners, contempt for authority; they show disrespect for elders and love gossip in place of activity.” That sentiment, often attributed to Socrates, is over a thousand years old, but 51% of the British public agrees with it, researchers found.
Naturally, the internet had some opinions about the researchers’ findings.

Even the researchers themselves expressed frustration with the narrative.
“The suggestion that the huge challenges young people face in buying their own home can be solved by skipping fancy coffees and Netflix entirely misses the point — but it’s still believed by half the public,” said Bobby Duffy, director of the Policy Institute at King’s College London.
Of course, Millennials’ inability to afford a home has nothing to do with our Netflix subscriptions (which, ironically, some of us still steal from our Boomer parents, thank you very much) or our daily $7 coffee (I’ll die renting before I give up my cold brew, you jerks).
Allow me to — *cracks knuckles* — briefly run through some of the real roadblocks to homeownership among people born between 1981 and 1996.

Crypto exchange Coinbase is laying off 18% of its employees — about 1,000 positions — as sthe company’s market value has tanked in the recent crypto meltdown.
“We appear to be entering a recession after a 10-plus year economic boom,” CEO Brian Armstrong wrote Tuesday. “A recession could lead to another crypto winter, and could last for an extended period.”
Bitcoin hit an all-time high of $69,000 in November 2021. Since then, the world’s most valuable cryptocurrency has lost two-thirds of its value, tumbling below $23,000 Tuesday. It has lost about 25% of its value since Friday.

Bears. Bulls. Two big, scary mammals that serve as Wall Street shorthand for the stock market’s general mood. Bear = pretty much everyone’s selling. Bull = pretty much everyone’s buying.
This week, US stocks fell into a “bear” market, dropping more than 20% from their most recent peak in early January. That rout ushered in the end of the “bull” market that began in the spring of 2020.
But how did these brawny beasts acquire their status as the default metaphors for stock market sentiment?
There are a couple of etymological theories behind the terms. One dates to the 18th century and involves poets, proverbs and a bunch of English scalawags bilking investors out of their money. Another (almost certainly fictional) story refers to the way the two animals attack.
Let’s start with the bear.

Whither the bull?
We’d have to ask (long dead) poet Alexander Pope why he selected the bull as the bear’s counterpart in this verse that alludes to his participation in the South Sea stock scandal:
Come fill the South Sea goblet full;
The gods shall of our stock take care:
Europa pleased accepts the Bull,
And Jove with joy puts off the Bear.
It’s entirely possible we got the term “bull” because Pope wanted something cool-sounding to rhyme with “full.”
One other theory…
There’s not a lot of evidence to support this one, but it’s made its way into Wall Street lore over the years, and it can be a helpful image for remembering what the two terms mean.
The idea is that a bear attacks by swiping its paws downward on its prey (downward swipe = stocks go down). A bull, on the other hand, thrusts its horns upward to gore the poor souls who cross its path (upward thrust = stocks go up).
There’s a bit of gruesome history linking bulls and bears in this way. Between the 1200s and 1600s in England, people would attend bull- and bear-baiting contests and gamble on the outcomes.

In that context, it’s not hard to see why modern trading is sometimes referred to as a bloodsport.
Enjoying Nightcap? Sign up and you’ll get all of this, plus some other funny stuff we liked on the internet, in your inbox every night. (OK, most nights — we believe in a four-day week around here.)
Source: Read Full Article