Home » Business » This SF couple moved from a studio to a $3,850-per-month luxury 1-bedroom: Why they decided to 'splurge' 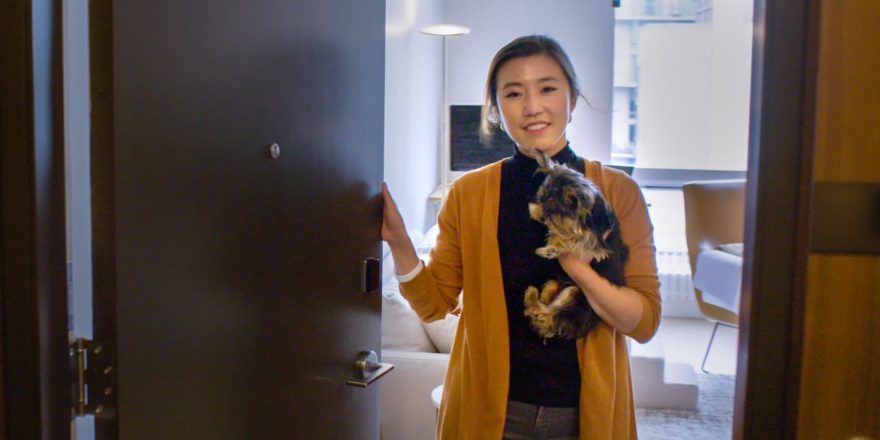 This SF couple moved from a studio to a $3,850-per-month luxury 1-bedroom: Why they decided to 'splurge'

Rachel Kam, a program manager at a major tech company, started working remotely during the pandemic last year out of her small studio apartment in San Francisco alongside her husband, a scientist at a biotech firm.

By the fall, when it became clear that remote work was going to stay, Kam and her husband decided it was time for an upgrade to a bigger apartment, in a different neighborhood.

"When I had to work from home full-time, it just very soon didn't feel sustainable for a healthy work-life balance," Kam tells CNBC Make It.

The couple's lease was up in October, and they started searching for a one-bedroom apartment with a budget of $4,000 a month — a significant increase from the $2,300 a month they were paying for the studio. "It was definitely a big change, but still within the budget that we had," she says.

Kam wanted to live in a high-rise building with lots of natural light, which she says is "crucial" during her workday. "I wanted to find a place with floor-to-ceiling windows with great view in front of us," she says.

They settled on a one-bedroom apartment for $3,850 a month in the Rincon Hill or East Cut neighborhood, right near the Financial District and the San Francisco-Oakland Bay Bridge.

The median listed rent for a one-bedroom in San Francisco is $2,895 as of May 23, according to Zillow.

From small studio to luxury high-rise

The couple saw about 15 different apartments, which was a "rigorous process," Kam says. Due to Covid safety restrictions at the time, they had to do a few "self-guided" apartment tours, which means that they were given a set of keys to check out an apartment alone without a broker present.

But apartment hunting during the pandemic also had its perks. "Since Covid started, a lot of the high-rise luxury building started giving out a lot of discounts," Kam says. In her case, the leasing agent offered them three months of free rent if they signed the lease within one week of viewing the apartment. "So we had to make a decision really fast."

Once they landed on the building and neighborhood that they liked, there were three available units to choose from with rents ranging from $2,800 to $3,850. The higher the floor, the more expensive the rent. "We had an opportunity to move 20 floors lower with roughly $600 less per month, but we decided to go with this one for the view," she says.

To secure the apartment, they had to pay a total of $8,700 in upfront costs, including the first and last month's rent and a security deposit. "To put out the up-front cost all in one go was definitely quite a burden for us as well," Kam says. "We had to transfer some of our money from savings in order to pay that."

Kam chose the current building because it was the newest and "had the best amenities of all the buildings that we toured," she says.

For example, the gym in the building was curated by the upscale fitness chain Equinox. Since the gym is available for all residents to use at no additional cost, the Kams were able to cancel the $400-a-month gym membership that they previously held.

The building also has an indoor pool, plus shared outdoor space on the roof, which has furniture, a firepit and a barbeque grill. "There's also a lounge where you can see an even better view of the Bay Bridge and the water, with an indoor theater room as well," Kam says.

Kam pays an additional $450 a month to use the building's parking lot. "It is definitely on the higher end in San Francisco, but it's because it only offers valet parking," she says.

Kam acknowledges that they pay a lot for rent currently, but she views it as the last rental building that she and her husband will be living in.

"After this lease, we're looking at buying a property around this neighborhood or in the Bay Area," she says. "So, we wanted to splurge to live in a nicer building and just enjoy ourselves until we have to be homeowners." (Kam also owns a two-bedroom apartment in Boston that she rents.)

The average value of homes in San Francisco is $1,453,455, according to Zillow. "We're definitely are going into the house-hunting mode with a mindset of trying to save as much as possible," Kam says.

To save for a mortgage, Kam says they are cutting down on traveling, which "used to be our biggest expense before Covid."