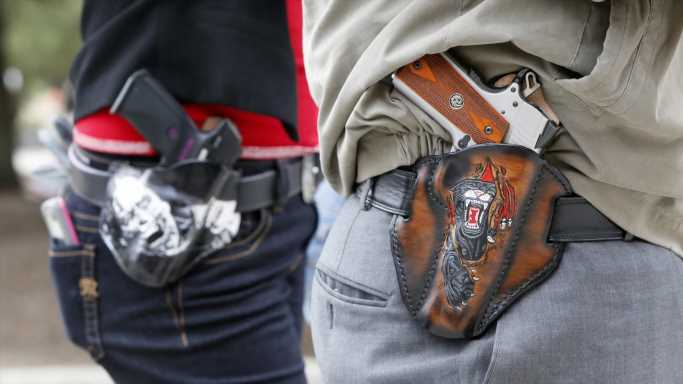 The Law for Carrying Firearms in Public in Every State

Earlier this month, America observed a grim 10th anniversary, the Sandy Hook Elementary School mass shooting. On Dec. 14, 2012, Adam Lanza killed 20 children aged 6- and 7-years old and six adults at the Sandy Hook Elementary School in Connecticut before taking his own life. It was one of the worst school shootings in U.S. history. (These are the deadliest mass shootings since the Columbine massacre.)

The Sandy Hook tragedy, and other mass shootings after it, touched off heated debates over gun ownership rights in the U.S. Complicating the issue is the fact that each state has its own gun laws.

24/7 Wall reviewed permit laws in each state governing concealed and open firearm carry compiled by the Giffords Law Center, a gun violence prevention organization. Laws are current as of July 2022 unless otherwise noted. We only reviewed laws at the state level, but laws can vary in local jurisdictions as well. We also reviewed FBI firearm background checks in 2021, a proxy for gun sales. Gun sales are adjusted per 100,000 people using population data from the U.S. Census Bureau’s 2021 American Community Survey.

In January 2023, Alabama will join the 24 other states that currently do not require any permits to carry a gun in public. This is part of a recent trend. Similar legislation was enacted in recent years by Indiana, Georgia, and Ohio. Eight of these 25 states had the highest gun sales per 100,000 people (using firearm background checks as a proxy) in 2021, led by Kentucky.

Besides Illinois, there are three states that forbid open carry and allow concealed carry with permit only – California, Florida, and New York. (These are the 24 states where gun related crimes are surging.)

Click here to see the law for carrying firearms in public in every state.