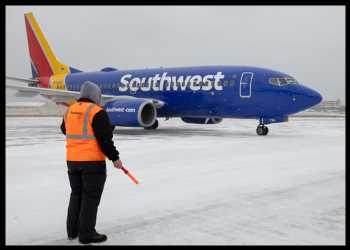 Southwest has been experiencing an operational meltdown following last week’s winter storm that had disrupted the travel sector completely, with airlines across the United States canceling large number of flights.

In a statement, Southwest said it continued to operate roughly one third of its schedule for Thursday, December 29.

The company said, “We are encouraged by the progress we’ve made to realign Crew, their schedules, and our fleet. With another holiday weekend full of important connections for our valued Customers and Employees, we are eager to return to a state of normalcy.”

The airline has set up a page for customers to submit refund and reimbursement requests for meals, hotel, and alternate transportation, as well as to connect customers to their baggage.

The company also said it plans to invest in new solutions to manage wide-scale disruptions.

The long Christmas weekend and following days turned into a nightmare for thousands of travelers who were stranded and frustrated due to massive flight cancellations and delays amid heavy winter storm and its after-effects. Cancellations and delays were expected to continue throughout this week as airlines across the country struggle to return to normal operations.

Southwest, the largest carrier in 23 of the top 25 travel markets in the U.S., canceled 2513 flights or 62 percent of its scheduled flights on Tuesday.

According to flightaware.com, total cancellations on Thursday, within, into, and out of the U.S. were 2,519 flights, and delays were 5,233 flights.

Amid the operational meltdown, Randy Barnes, president of Transport Workers Union of America or TWU Local 555 representing ground workers at Southwest Airlines, said in a statement that many of the airline’s staff were forced to work 16 or 18-hour days during the holiday season, and that they were getting sick and experienced frostbite over the past week.