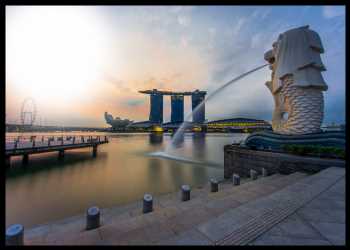 Singapore’s economic growth weakened sharply towards the end of the year as the manufacturing sector slid into contraction mainly due to falls in electronics and biomedical production.

Gross domestic product grew only 2.2 percent on a yearly basis in the fourth quarter, moderating from the 4.2 percent expansion in the preceding period, figures from the Ministry of Trade and Industry showed on Tuesday.

The city-state’s economic growth momentum has been showing signs of slowing especially in the latest trade numbers and this trend is likely to continue in early 2023 as global trade is expected to face challenges this year, economists at ING said.

On a quarterly comparison, economic growth slowed sharply to 0.2 percent from 1.1 percent in the prior quarter.

The fourth quarter contraction was driven by the 3.0 percent fall in manufacturing output. This has reversed the 1.4 percent growth in the previous quarter.

For the whole of 2022, the economy grew 3.8 percent, much weaker than the 7.6 percent growth in 2021. This was within the central bank’s growth projection of 3-4 percent.

Growth is likely slow to a below trend and below consensus 1.0 percent this year, Capital Economics economist Shivaan Tandon said.

The upshot is that with the economy set to struggle and inflation expected to ease, due to weaker demand side pressures and lower commodity price inflation, further monetary tightening from the Monetary Authority of Singapore is unlikely in 2023, the economist noted.