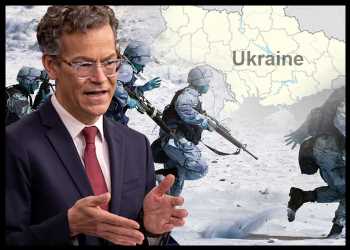 Russian President Vladimir Putin’s invasion of Ukraine has been “a catastrophic strategic disaster,” according to a top U.S. defense official.

“But I can say one thing with confidence, which is, Russia has already suffered a massive strategic failure. That’s not going to change,” Colin H. Kahl, the U.S. Under Secretary of defense for policy, told the Defense Writers’ Group on Tuesday.

Kahl briefed the group about the National Defense Strategy and said that the document lists China as the leading threat for the United States but that Russia poses an acute threat. “That term acute, was chosen very intentionally as signifying both immediate and sharp,” he said.

China has the will and resources to challenge the United States and the rule-based international order that has kept the peace since the end of World War II. But Russia’s unprovoked invasion of Ukraine shows it is a dangerous and reckless state.

Speaking on Election Day, Kahl charted the progress Ukraine has made. The Ukrainian military defeated Russia’s initial campaign to grab the capital of Kyiv and forced the Russians to retreat to the east.

More recently, the Ukrainian military launched a counteroffensive against Russian troops in the northeastern part of the country outside Kharkiv. The Ukrainian military has also stabilized the lines in the Donbass and the army continues to make methodical progress around Kherson.

“There’s some indications that the Russians intend to withdraw to the east bank of the Dnieper River,” Kahl said. “They are repositioning their forces in in some ways that could be interpreted as providing cover for an orderly withdrawal so that they don’t have the kind of disorderly withdrawal they had up in Kharkiv.”

Still he is cautious noting that there are still tens of thousands of Russian troops in Ukraine. “We’ll have to see how that plays out,” he said.

Winter may or may not close down the fighting in the country. The “mud season” has already started in Ukraine, making operations more difficult.

Putin’s goal was to extinguish Ukraine as an independent, sovereign democratic country, the undersecretary said. “He’s failed, and that’s not going to change. A sovereign, independent, democratic Ukraine is going to endure,” he said.

Putin wanted to prove that Russia was still a global power with an extraordinarily overwhelming military, Kahl said. Victory over Ukraine would allow Russia to coerce and intimidate its neighbors. “Putin has failed,” he said. “Russia will emerge from this war weaker than it went in.”

The Russian military has lost tens of thousands to Ukrainian guns and bombs. “They’ve … probably lost half of their main battle tanks,” he said.

And the Russians have expended the majority of their precision-guided munitions with no chance of replenishing stocks due to sanctions and export controls levied on the nation for the invasion.

Putin also figured the war would divide the West. “It’s produced the exact opposite,” he said. “NATO is more united than ever. We’re on the precipice of Sweden and Finland, probably joining the alliance, which … make the alliance much stronger vis-a-vis Russia.”

“I don’t know what winning looks like. But I do know that Russia will not have achieved the objectives that Vladimir Putin set out. And that’s pretty much a guarantee,” Kahl added.