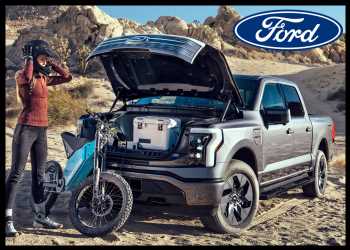 Amid surging demand, Ford Motor Co. is boosting the production of electric F-150 Lightning pickup truck with the addition of a third production shift to its Rouge Electric Vehicle Center in Michigan.

The automaker said it is now the No. 2 EV brand in the U.S. year-to-date with the success of Lightning.

In a tweet, Ford CEO Jim Farley said, “As we ramp up production for #F150Lightning, we’ve added a third crew and are expanding the size of the Rouge Electric Vehicle Center by more than 50%. Here’s more on how we’re working hard to increase production to 150,000 per year next fall.”

Ford said it has invested $950 million and created 750 jobs at the center to assemble the F-150 Lightening pickup. The company, while assembling trucks, is also expanding the factory at both ends to increase the size by over 50 percent. With the addition of the third shift, production will nearly double to an annual rate of 150,000 trucks in fall 2023.

According to Ford, the F-150 Lightning earned the title of America’s best-selling electric truck in October and November. Lightning’s sales of 2,436 units in October was considered as the best monthly sales record since launch. In November, sales totaled 2,062. Since the truck was introduced in May, through the end of November, the company has sold 13,258 F-150 Lightnings.

Ford’s initial plan was to build about 40,000 Lightnings per year, but the production was ramped up following strong demand for its pickup truck.

Ford on its website says, “Due to high demand, the current model year is no longer available for retail order.”

The expansion plan comes in the wake of Ford F-150 Lightning truck winning the 2023 MotorTrend Truck of the Year, that was announced on Tuesday.