Home » Business » Donald Trump Gets The Spotlight For His 2024 Speech, But Networks Vary In Coverage And Cutaways 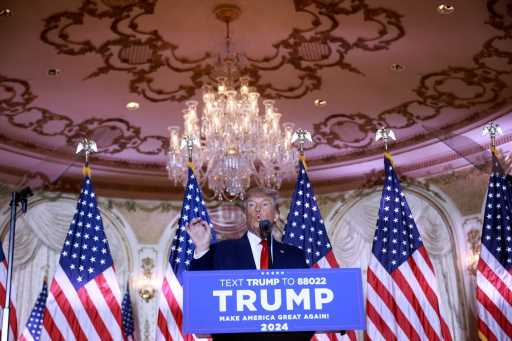 Donald Trump Gets The Spotlight For His 2024 Speech, But Networks Vary In Coverage And Cutaways

Donald Trump did draw the media spotlight for his presidential announcement speech on Tuesday, but the networks varied in how they approached the event, carrying parts of it and cutting away at others.

The coverage perhaps offers a glimpse of how Trump will be covered as he embarks on his third presidential bid — certainly a top story, but not the only one.

Trump promoted the speech as “one of the most important ones in the history of our country,” but the networks alternated their focus on other stories throughout the day. That included the missile hit on Poland that, just minutes before Trump took the stage, put the focus on his nemesis, President Joe Biden.

Jan. 6 Committee Disputes Pence's Characterization Of Hearings: "This Testimony…Was Not 'Partisan.' It Was Truthful" – Updated

CNN carried the speech from Mar-a-Lago for more than 20 minutes before cutting away when Trump made the official announcement. Anderson Cooper then went to a fact check with Daniel Dale, a fixture during the 2020 election cycle. The network also had more build up to the speech than its rivals, previewing it in the previous hours, including Cooper’s interview with Bob Woodward and Carl Bernstein and Erin Burnett’s interview with ABC News’ Jonathan Karl, the author of two Trump books who was in Mar-a-Lago to cover the speech. It also featured shots of the Mar-a-Lago ballroom filling up with guests in front of the empty lectern.

Fox News carried much of Trump’s speech during Hannity and portions of it during The Ingraham Angle, cutting away at different moments as it approached the one-hour mark. When Trump started talking about “Angela,” meaning former German chancellor Angela Merkel, Hannity went to Mike Huckabee and Pete Hegseth for their glowing reviews. Huckabee said that Trump would be “unbeatable” if he stayed on message like he did in the speech; Hegseth talked of there being “only one original” amid a potential field of GOP rivals.

Those positive remarks are a contrast to those offered by other Rupert Murdoch outlets, like the New York Post and The Wall Street Journal, which have bashed Trump in the wake of midterm losses. As if to try to spin that into a Trump win, Monica Crowley later told Ingraham that it was notable that on the same night that Trump jumped into the presidential race, one media outlet projected that the GOP would take the House majority. The outlet was Decision Desk HQ, and the majority will be a very slim one.

MSNBC stuck with Alex Wagner and its analysts through much of the speech, at time dropping into it and at others featuring a split screen.

All of the networks will be under tremendous scrutiny, particularly if there is a large field of candidates in the Republican primary. Back in 2016, CNN drew criticism for the coverage it gave to Trump’s rallies over other candidates, while NBC stations were forced to provide airtime to other GOP candidates after the former Celebrity Apprentice star was invited to host Saturday Night Live. Then CBS head Les Moonves famously said that Trump’s campaign “may not be good for America” but it was “damn good for CBS.”

CNN has indicated that it will take a different approach this time around, weighing events for their news value, rather than descending into the Trump-a-rama of past cycles, and most of the other networks reflected a somewhat more cautious approach, giving a presidential contender his due but not overdoing it. This speech was also far from the novelty of seven years ago, when Trump’s ride down an escalator was met with some bewilderment and outrage.

The news likely will be on Trump as he is at the center of federal investigations, the January 6th Committee report and the first major candidate in the 2024 field. And depending on his ability to command a ratings spectacle — imagine a first debate with Ron DeSantis — the temptation for Trump may be too great to pass up.