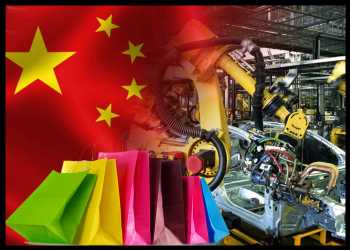 China’s economic growth accelerated in the third quarter after the relaxation of Covid restrictions, but other economic indicators signaled a mixed picture, official data revealed Monday.

Gross domestic product logged an annual growth of 3.9 percent in the third quarter, faster than the 0.4 percent expansion seen in the second quarter, the National Bureau of Statistics reported.

The pace of growth also exceeded economists’ forecast of 3.4 percent, but fell short of Beijing’s growth target of ‘around 5.5 percent’ for the whole year.

Due to the low base of comparison, the quarterly growth also came in at 3.9 percent in the third quarter, again above the forecast of 3.5 percent.

The International Monetary Fund had projected China’s economy to grow 3.2 percent this year, but slashed the country’s forecast for next year to 4.4 percent.

Last week, the NBS had delayed the publication of its third quarter GDP data along with other major economic indicators as the initial release date coincided with the 20th party conference of the ruling Communist Party.

At the party conference on Sunday, President Xi Jinping was re-elected as the General Secretary of the Communist Party for a third term.

Driven by reduced lockdowns in ports, industrial production advanced at a faster pace of 6.3 percent annually in September, following a 4.2 percent gain in August. Output was forecast to rise 4.5 percent.

Meanwhile, the retail sales growth eased to 2.5 percent from 5.4 percent a month ago. This was slower than economists’ forecast of 3.3 percent.

For the January to September period, fixed asset investment increased 5.9 percent from the same period last year, almost in line with the expected growth of 6.0 percent.

The property market downturn continued to weigh on the overall economic growth. Property investment plunged 8.0 percent during the January to September period.

The urban surveyed unemployment rate climbed to 5.5 percent in September from 5.3 percent in August.

Data published by the General Administration of Customs showed that exports rose 5.7 percent in September, after increasing 7.1 percent a month ago.

On the other hand, growth in imports held steady at 0.3 percent. Exports and imports were expected to gain 4.1 percent and 1.0 percent, respectively.

As a result, the trade surplus rose to $84.7 billion in September from $79.4 billion in August.

This set of data sends an important message that even Covid measures have become more flexible as it depends on the number of Covid cases, lockdowns are still a big uncertainty to the economy with the background of the real estate crisis, ING economist Iris Pang said.

This uncertainty means the effectiveness of pro-growth policy would be undermined, the economist added.

Capital Economics’ economist Julian Evans-Pritchard said the outlook remains gloomy. There is no prospect of China lifting its zero-COVID policy in the near future, and any meaningful relaxation before 2024 is not expected.

The economist said the official GDP is set to expand just 3.5 percent next year, with actual growth likely to be even weaker.